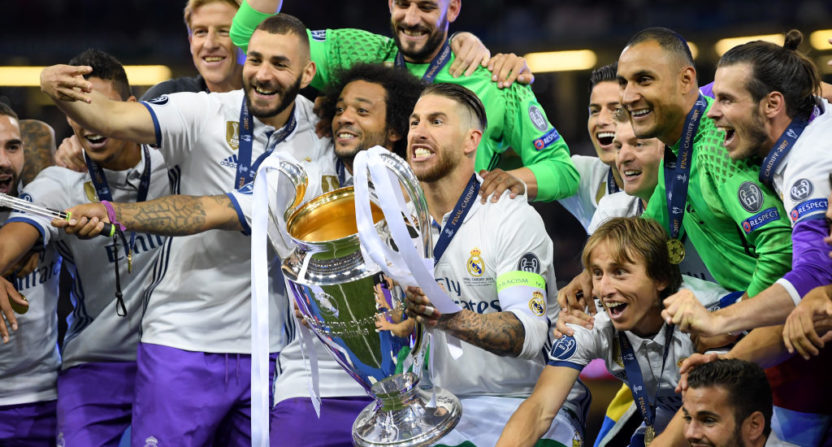 While the 2010s largely solidified the top club teams in the world, we still got some variety up top. Most “big teams” within the main five European leagues had some bumps along the road, and some had some worse bumps than others, but many of them experienced success at one time or another this decade.

While there were plenty of great teams, they couldn’t all make this list. Such notable omissions were Fergie’s final Manchester United teams, Jurgen Klopp’s Borussia Dortmund side, the mighty Juventus teams of the decade, and the magical Cinderella Premier League run from Leicester City. There are so many teams worthy of being on this list, but I could only choose 10 so away we go.

Spain can be incredibly difficult to reach success if you’re not Barcelona or Real Madrid. Since the formation of the league in 1929, Barca and Real combined for 59 titles and the other team finished second in 30 of those years. And since 2004, only one other team won the La Liga title- Atlético Madrid in 2013-14. Their La Liga trophy may not be as much silverware as the other teams on this list, but winning that and almost winning Champions League with a roster that was operating at the fraction of the best teams in Spain and Europe really showed how great this team was.

Continuing the trend of highly defensive and counterattacking teams, Chelsea reached a pinnacle in the second José Mourinho era. Chelsea had a rather inconsistent run throughout the decade. One year, Chelsea would win a double, and the next year they would finish 10th and win nothing. They would win Champions League with an interim manager, but bow out in the group stage or round of 16 most years. But there were a few great Chelsea teams to remember and this was the best one, with a domestic double and only having three losses in the Premier League. It was the last hurrah for Didier Drogba, and the beginning of the end for Mourinho at Chelsea before they bounced back once again.

This Jupp Heynckes led squad began Bayern Munich’s domination in Germany. The first of seven consecutive (and counting) Bundesliga titles, this was the squad that also became the first German team to win the treble. With a 25-point margin of victory in the Bundesliga, Bayern clinched the Bundesliga six games in advance in early April. Now, it seems like Bayern winning trophies is as common as the sun rising, but this Bayern team was really special.

The brainchild of José Mourinho at the height of his “Special One” hype, this Inter team was a defensive juggernaut that just wouldn’t let anyone score. Mourinho wanted to “park the bus,” and by goodness he did just that and was wildly successful. A five-peat in Serie A (three with Mourinho), and a treble with the Champions League and Coppa Italia, this Inter team was the last team where Mourinho left a winner and had his team on top.

There’s a pretty good chance this year’s Liverpool team will be on this list six months from now, but because the season isn’t over, they’re not on here just yet. But if Liverpool can hold on, they may be one of the top teams in both the 2010s and 2020s. Anyway, last year’s Liverpool team was without a doubt the greatest team to not win their league. With 97 points, Liverpool would’ve won the Premier League in every season other than in 2017-18, but it wasn’t meant to be. A Champions League win saved Liverpool’s season and saved us from wondering “What might’ve been if this Liverpool team didn’t win a trophy?”

If 2018-19 Liverpool was on this list, that Man City team who did just one point better in the Premier League should be close by. Many will debate which team was better, given that Liverpool lost once in the Premier League and was the best in Europe, while City was the best in England. But in the end, the one who won the domestic treble should win out. It’s not as great of a feat as the Centurions (more on that later), but this team was lethal.

The first and only European team to have won a second treble, this Barcelona team was defined by the front three of Lionel Messi, Neymar, and Luis Suárez. Scoring the most goals of any team on this list, that front three scored an impressive 122 goals across major competitions. Those three world class goalscorers all playing at the same time gave defenders nightmares. You could defend against one of those players, maybe two if you were great, but it was near impossible to defend against all three.

Not since Bayern Munich in the mid 70s has a team won three consecutive European Cup/Champions League titles. That was until the recent Real Madrid teams of 2015-2018. What makes this Real team distinctive over the other two is that they were also La Liga champions. Granted, he got one of the best teams in the world, but Zinedine Zidane’s work in his first top flight managerial job cannot be understated. At the moment, he’s still undefeated in the Champions League.

The 2017-18 and 2018-19 Manchester City teams are on here twice because they were able to do something unprecedented in both seasons. While last year’s team became the first team to win the domestic treble in England, this Manchester City team reached 100 points for the first time ever in the Premier League, and scored more goals in the PL (106) and won by the largest margin of victory (+19). The two teams may have had many of the same players, but the Centurions were more impressive.

All these teams were great, but this Barcelona team was influential. This Pep Guardiola run team was described by Sir Alex Ferguson as the strongest team he has ever faced, and for good reason. Not only did this Barcelona team dominate and was a Copa del Rey final short of winning a treble, but other teams attempted to emulate this brand of tiki-taka style for the rest of the decade.