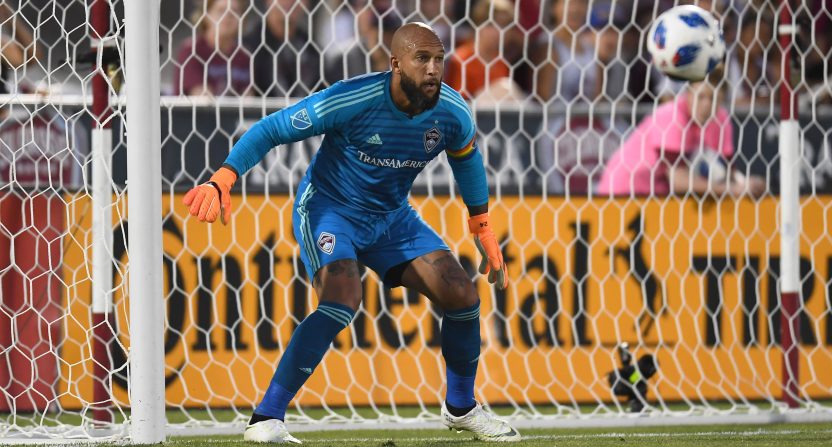 As legendary U.S. goalkeeper Tim Howard approaches the end of his playing career, he wanted broadcasting to be a part of his life again.

So when the opportunity to join Turner Sports as an analyst for its new Champions League coverage— which begins next week with the UEFA Super Cup between Real Madrid and Atletico Madrid— presented itself, Howard knew that it was the right fit.

“It’s something that I want to be a part of as I come to the end of my career,” Howard told Awful Announcing over the phone on Wednesday. “It’s where I see myself. So part of that is getting in with the right company, which is the right fit for me.”

Howard became the first active English Premier League player to broadcast matches in 2014, when he worked for NBCSN while starting in goal for Everton. He’ll do it again on Wednesdays during the Champions League season for Turner, working alongside host Kate Abdo and analysts Steve Nash and Stu Holden, while remaining the starting goalkeeper for MLS’ Colorado Rapids. Turner will also be using two “fully-integrated” studios in Atlanta and Los Angeles for its broadcasts, with both being used at the same time, per a release.

“I did it, as far as I’m concerned, seamlessly in the past,” he said, noting that he has experience juggling both roles.

“I have this season and one more season with the Colorado Rapids [on his contract],” he said. “And I’ll be 40, and I think the time will be right then.”

For someone of Howard’s accomplished stature in both international and club soccer, the word “transition” can be a tricky one. He maintained that the Turner analyst gig isn’t something he had to do in order to make the next step into a post-playing broadcasting career, but saw it as something both he and Turner wanted to make work.

As for Turner, it will be the first time it’s broadcasting major international soccer since the 1990 World Cup. So a lot of attention will to be on TNT when it airs its first studio shows and games, with critics and viewers alike wondering how Turner will put its imprint on things.

“Turner’s idea of how to put Champions League across to the world, or at least to the American audience, certainly is pretty special and innovative,” Howard said.

Without divulging too much, Howard said that the studio programming will have a large social and interactive component that other rights holders didn’t fully utilize.

“We’re gonna have a lot of feedback from viewers,” Howard said. “It’s 2018, right? And so the way the world works is that there is shared content between viewers and talent and athletes. And we’re gonna try and mimic that in the show.”

Howard boasted that the talent, sets and content “is going to be a different show than most people are used to, but one that is no doubt going to attract a much greater audience.”

While the quartet of Howard, Nash, Holden and Abdo— the latter two of which will continue their roles at Fox, per a source— haven’t done any practice shows together, Howard said they all knew each other prior to joining Turner and have had talent and production meetings leading up to next week’s debut telecast.

For Howard and Nash, especially Nash, Turner is banking on the pair’s crossover appeal. Having a current player on the broadcast is one thing, but having an NBA Hall Of Famer as a soccer analyst— even though he’s a minority owner in MLS’ Vancouver Whitecaps and is active in soccer circles— is another. But Howard explained that today’s American soccer fan is not only more sophisticated, but is more likely to be big fans of multiple sports, especially basketball.

“I’ve got a bunch of friends in the NBA who I talk to who have been taught the game of soccer through video games,” Howard said. “And they’re spending time going to the Bernabeu and to Paris St. Germain and they’re associating with soccer players. It’s become cool. And so when we talk about crossover, it’s there. It’s real.”

And so however the American audience comes to watch and enjoy soccer, Howard says that Turner wants to be in position to optimally engage with those people.

“And so you talk about someone like Steve, it’s not outlandish,” Howard said. “It’s kind of unprecedented, but it’s there. It’s real.”

So starting next week, Turner will begin its run as Champions League rights holders, with many games being shown on it’s new OTT service B/R Live, and a current MLS player and an NBA legend as studio analysts. It’ll all be very new, and very different.

“Odell Beckham is hanging out with Neymar, right? This is what soccer looks like in 2018,” Howard said, “and we’re just making sure that we’re a part of that story.”