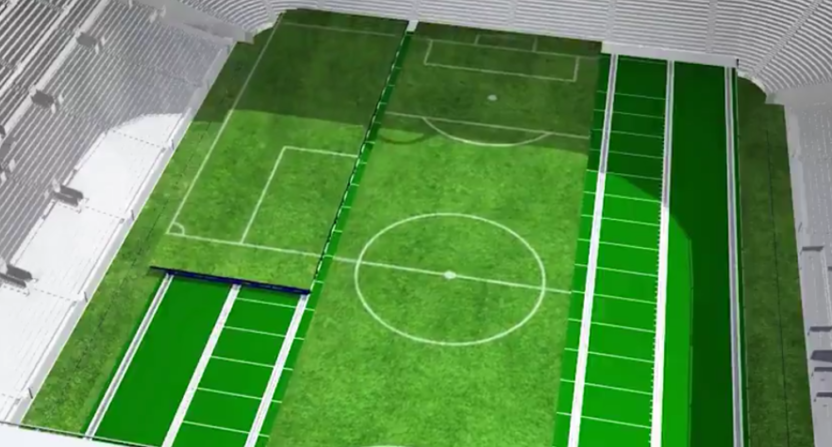 Using one stadium for both soccer and football makes sense on a lot of levels, but it’s generally brought up concerns about artificial turf, football lines and more. Tottenham Hotspur feel they have a way to solve that with their forthcoming new stadium (set to open ahead of the 2018-19 English Premier League season), though, unveiling plans Thursday for a “dividing retractable pitch” that’s claimed to be the first of its kind in the world.

Here’s the video they sent out, created by SCX, the company hired to design this:

The idea is to have a grass pitch for soccer, but one that can be quickly and easily removed to reveal an artificial surface underneath for NFL games and concerts. ESPN’s Dan Kilpatrick has more on just how this will work:

Spurs have chosen SCX to design, engineer, build and install the pitch over a 12-week period from October and, in a statement, the company said the real-turf football pitch will sit in three pitch-long steel trays, weighing more than 3,000 tonnes each.

The surface will split into three sections to show each tray before retracting under the South Stand to reveal the artificial playing surface underneath. The process of switching from one surface to another is expected to take approximately 25 minutes.

Once the grass pitch is returned, the joins are invisible and undetectable.

That quick time turnaround is important, as Spurs’ chairman Daniel Levy has already talked about his hopes to host Premier League and NFL matches on the same day. The NFL has already signed a 10-year partnership with the club and invested $12.8 million of the expected $900 million stadium cost, and they’ll be playing at least two NFL games per year in the new facility (which will have separate NFL locker rooms).

Levy’s previously talked about how important the NFL has been to the project, and how he hopes a NFL team will one day be based there full-time:

We worked together,” Levy said, “because it needed to be viewed as a combined joint soccer and NFL stadium. In fact, the way we designed the whole experience is one side of the stadium is a dedicated soccer entrance and the other side is a dedicated NFL entrance.

“If it ever got to a stage where the NFL decided it wanted to have a permanent team in London, this stadium could literally be, whatever the team was, it would be their stadium as opposed to an NFL team feeling they’re renting Tottenham’s stadium.”

…”We would welcome very much close cooperation with the NFL and a dedicated team,” Levy said. “Obviously a decision is entirely theirs whether they do bring a team to the U.K., and where it would be located is something that would be talked about. But yes, we would be very much welcome to that scenario.”

This retractable pitch idea is clearly expensive and complicated, but it may be key to those ambitions. It will be interesting to see how it works in practice, but the design does seem like it could alleviate some concerns about a shared soccer/football stadium. And the company involved, SCX, has some experience with unusual sports projects; they built Wimbledon’s Centre Court retractable roof and are working on a smaller roof for Court One. We’ll see how they do with that.