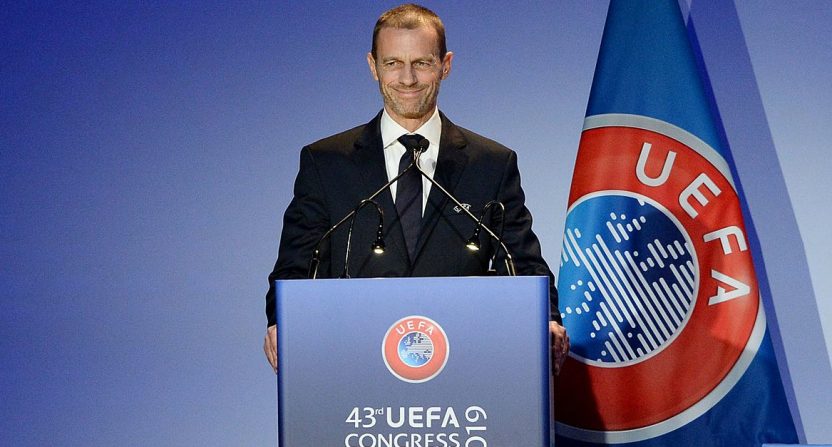 It’s seemingly been a weekly occurrence of something racist happening at a soccer game but something was different here in how a situation like this would be handled. Tammy Abraham, who has been racially abused by some of his own club fans this season, revealed that England would be prepared to defy UEFA’s orders to leave the pitch if a player felt uncomfortable.

That didn’t happen but the referee did stop the match twice, which was the first step of UEFA’s three-step protocol to combat in-stadium racism during a match.

After the match, England lodged a formal complaint and UEFA president Aleksander Ceferin took a strong line against racism, calling on governments to “wage war” against racists. Bulgaria’s prime minister called on the Bulgarian Football Union president to resign for what happened, which he did.

For years, FIFA, UEFA, and most leagues have had some sort of anti-racist program and occasionally have team captains read a speech written by the organization about respecting everyone and all. It’s a nice thought and it says the right things but it’s really just a naive PR stunt to fool people you’re actually doing something. Those who are racist are probably not going to listen to their captain read a piece of paper and become a more enlightened individual.

Ceferin can trot out all the statistics he wants. He can claim that UEFA has the “toughest sanctions” for racism and is “the only football body to ban a player for ten matches.” He can accuse people are “way off the mark” when they criticize UEFA for not doing more but the fact is it’s 2019 and not only has racism not stalled, it’s growing. So what is UEFA to do?

If Ceferin really wants to “wage war,” maybe that means going nuclear (in a metaphorical sense). And if you’re going nuclear, that means doing something that will have major consequences on teams if fans are guilty of racism. Closing sections or entire stadiums haven’t solved the problem so it’s time to deduct points and if that doesn’t stop racist behavior, expulsion.

UEFA hasn’t been opposed to excluding teams from their competitions in order to make a clear stand things will not continue. In the 1985 European Cup Final, 39 fans were killed and 14 Liverpool fans were convicted of manslaughter after a wall collapsed that had Juventus fans running away from charging Liverpool fans.

Hooliganism was running rampant in Europe in the 80s, especially in England, and this was the last straw for UEFA. English teams were banned from UEFA competitions for five years, and Liverpool was banned for an additional year, for what happened at Heysel. That’s not to say hooliganism stopped completely but it sure got teams to take things seriously when there was a real risk of losing out of continental competitions that it motivated teams to institute improved standards, especially in England.

Over the next 35 years, hooliganism has been largely controlled in some places but it’s beginning to rear its ugly head just like racism. The lack of even a semi-serious risk of losing points or their position in European tournaments has allowed teams to just put out boilerplate statements saying they’re “disgusted by this abhorrent behavior,” and then forget about it the next day. They might ban the fan but that’s it. It’s all about doing the bare minimum PR-wise to get fans and the media off your back.

There has never been an instance of teams having points deducted or being excluded due to racist and homophobic fan behavior and that’s been the problem. If teams want to tout their fans as the 12th man, then they need to be held responsible for what those fans do. If teams know that they can be massively hurt in the wallet by missing out on a tremendous amount of revenue or success that would have a resonating effect for years, it would cause them to be way more motivated to stomp out racism. It might sound extreme, it might not sound fair, but if Aleksander Ceferin really wants to “wage war” on racists, then let’s go to war.