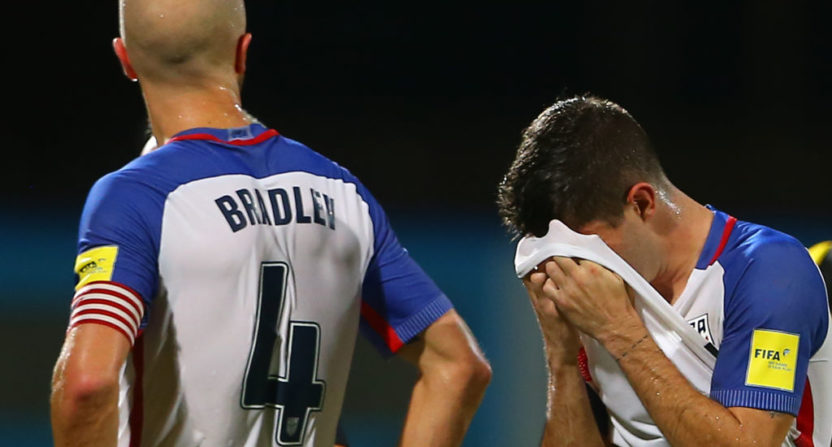 Soccer is a unique sport. While we writers are supposed to be impartial and not supposed to cheer for certain teams, that goes out the window when it comes to the international game. We are fans all the same and are emotionally invested in the national team which we grew up with and most likely was what got us to become fans of “the beautiful game.”

Like many of you, our soccer staff at The Comeback experienced just about every emotion when the USMNT lost to Trinidad & Tobago and failed to qualify for the World Cup for the first time that the vast majority of us have been alive.

And because many of us are harboring feelings ranging from sadness to anger, we needed a way to get all this out of our system and move on to cover the club game and next year’s World Cup (yes, we’re obviously still going to cover the World Cup) without the USMNT. So every writer was free to write up a paragraph to say whatever they wanted about what happened. Whether they wanted to be constructive or wanted to curse everyone out and throw everyone under the bus, these are the feelings of our soccer staff, who not only cover the US Men’s National Team but are fans as well.

Phillip Bupp: To all the players and the rest of US Soccer, I know that there is no one who feels worse about not qualifying for the World Cup than you do right now. For me as a fan and citizen, it was disappointing, but for you, it was embarrassing. I’m reminded of Herb Brooks’ speech before the third period of their Gold Medal game against Finland in the 1980 Winter Olympics that perfectly describes how I feel. The final thing Brooks told his players was, “If you lose this game, you’ll take it to your fucking graves. Your fucking graves!”

No matter what each and every one of you do for the rest of your lives, you will take your failure of last night to your graves and quite frankly, that might be the biggest punishment any of you could ever endure.

Jeff Snyder: The USMNT was simply not good enough. There needs to be an identity to the team and some consistency. This needs to be our Germany post-Klinsmann era — a total revamp. Right now, we’re spinning our wheels trying to just stumble onto something that works. It’s time to actually promote coaching from the ground up. It’s time to improve the training kids are receiving and stop the pay-to-play system that shuts out so many potential stars.

Hopefully, this is our “dark night of the soul” moment that allows us to refresh and improve. If US Soccer isn’t willing to do that, it’s time for those in charge to step down for the good of the program and the country.

Pauly Kwestel: I was never a fan of the Bruce Arena hire (I wrote as much at the time), but not even I could have envisioned it going this poorly. None of the reasons that US Soccer, or the media, gave for hiring Bruce made any sense at the time and they all manifested.

The US had underperforming players, players who continued to underperform and not show up for big games even after a managerial change. The team needed a manager who wouldn’t be afraid to lay down the law and drop underachieving vets if need be, which ultimately it needed to be. Bruce Arena did none of that. He played it safe and when things got dangerous, he played it even safer. He ran the same guys out there time and time again even though history and recent results suggested the outcome wouldn’t be any different.

Now here we are, outside of the World Cup. Arena has managed to set this program back years. Not only did we miss the World Cup, but who beyond Pulisic are we supposed to be excited about? Arena introduced no new talent into the team. When he had the chance in this summer’s Gold Cup, he chose to send the impressive players home and called in his vets because using his A team to win a tournament of B teams was more important to him than seeing what kind of depth he had in his player pool. Now we’re here, in need of an overhaul that starts from the top and goes down to most of the players on the field.

Hopefully, US Soccer takes their time to pick what direction they want to go in. They have time because the next “competitive” match isn’t for another 20 months.

Matt Lichtenstadter: This is the lowest of the low for US Soccer. So much momentum in US Soccer has been squandered from complacency and not taking problems seriously for years, especially recently. For all of the excuses, CONCACAF, managers, player pool, etc. This is on everyone. And the rebuilding process will be difficult, brutal and tough. No one escapes blame.

Jay Rigdon: While missing the World Cup is a failure on every level, let’s keep the focus on the players. And moreover, on the fact that this player pool just isn’t that good. MLS has been a great boost for the depth of American soccer, and has ironically helped to strengthen CONCACAF as a whole, but it’s not close to the right environment to develop the kind of talent the United States needs to consistently win games. (That Bruce Arena left EPL starter Geoff Cameron on the bench, and Bundesliga regular Fabian Johnson off the team entirely, is another factor.)

Any suggestion that this was the most talented American team ever is plainly foolish. The pool has likely never been better from player #20-#100, but the talent gap between Christian Pulisic, perhaps this country’s best player ever but still just 19, and the next best player on the roster (Bobby Wood? DeAndre Yedlin?) is so readily apparent, and it’s a gap the USMNT needs to fill in. If there aren’t 20+ American players playing in top European leagues by the 2022 World Cup, we might be having the exact same conversation, regardless of who the manager is.

Harrison Hamm: It is not time to start blaming everybody. Do not look at Bruce Arena and say, “this guy set the program back decades,” and don’t get heated at the “US Soccer Establishment” because Sunil Gulati or whoever didn’t get things done, and sure as hell don’t look at this group of players and say “wow, these guys just aren’t good enough to compete on a world stage.” It’s not Jozy Altidore’s fault, and it’s not Jurgen Klinsmann’s fault.

The truth is, I don’t know what to say about this. I can’t sit down and write up a list of reasons. All I can say is, this country has advanced too far in this sport to tear it all down because Omar Gonzalez fluffed a clearance. The US’ soccer infrastructure is good. Their player development is good. MLS has been huge, and has made so many strides in recent years to massively aid this program. So do not play the blame game, and don’t start tearing things down. That’s all I have to say.

Harrison Prolic: There is an expression in Germany that I enjoy. It’s “Nach dem Spiel ist vor dem Spiel” which means “After the game is before the game.” Interpret it the way you’d like but for me, it’s about learning from what came before and using that to prepare for what comes next. It’s hard to imagine a more embarrassing turn of events for the USMNT than what happened last night. But a far more embarrassing, and unforgivable thing would be to never learn from this.

The Men’s National team will have to be torn down, leaving only a few remaining pieces. And to do anything else would be negligent towards a country that is, despite what anyone else says, a soccer nation. Obviously, there are examples for the US to follow, mainly Germany. I watched in horror as Germany embarrassed themselves in 2004, but in ten years time they were world champions. It might take longer for the US to get there. But anything worth doing is worth doing right. The US has the resources to make this happen and if they do, you’ll all look back on this as a distant memory.