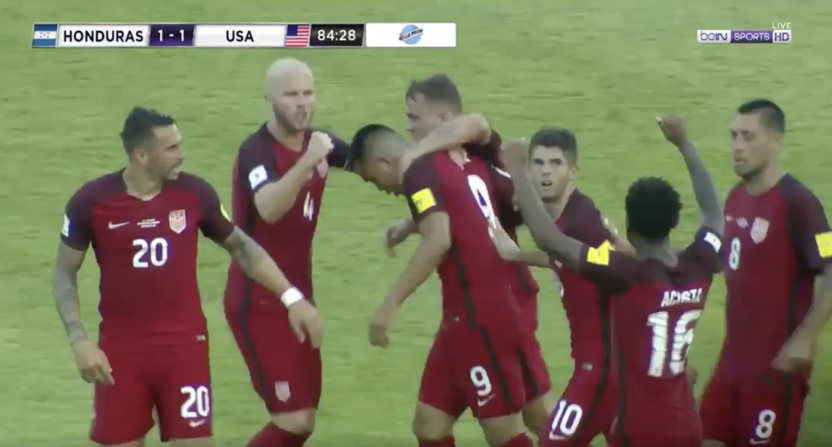 Traveling to San Pedro Sula, Honduras is never an easy task for the US Men’s National Team. Especially not when a result is absolutely crucial to World Cup qualification.

That was the case on Tuesday, as Honduras partly avenged a 6-0 March blowout in San Jose with an ugly 1-1 home draw against the USMNT, who despite an 85th-minute Bobby Wood equalizer looked just as sluggish as they did on Friday in a 2-0 home loss to Costa Rica.

They sit in fourth in the CONCACAF Hexagonal table, with Panama defeating Trinidad and Tobago and moving up to third. The top three finishers in the group qualify with the fourth-place side advancing to a November two-leg playoff with an Asian qualifier, confirmed to be either Australia or Syria. The US sit on eight points, ahead of Honduras on goal differential with two games remaining.

Arena sent out a 4-4-2 in Honduras with seven changes from the disastrous Costa Rica game. Brad Guzan started in goal ahead of Tim Howard (who allowed a bad goal in New Jersey); Geoff Cameron and Tim Ream sat after rough performances; the ageless DaMarcus Beasley added another cap at left back; Kellyn Acosta played alongside Michael Bradley in deep midfield; Darlington Nagbe and Christian Pulisic were the wide midfielders; and Clint Dempsey started next to Jordan Morris up top.

A better lineup than Friday — Nagbe was in Acosta’s spot, which was not a great idea — but it didn’t produce better soccer, as Honduras thoroughly outplayed the US for almost the entire match. Pulisic spent most of his time getting hacked (welcome to CONCACAF, bud) and Dempsey barely touched the ball.

Romell Quioto, of the Houston Dynamo in MLS, roasted Omar Gonzalez in the first half and curled a ball off the far-post and in, giving Honduras a 1-0 lead and setting the vuvuzela-filled stadium ablaze. Confidence was low for USMNT fans, given the utter horrific performances this month and the tough nature of playing in Honduras.

Substitutions arrived in the second half, as Arena switched to a 3-5-2 by taking off Beasley and Graham Zusi (who were, frankly, dreadful at full back) and putting on Cameron, Paul Arriola, and eventually the speedy striker Wood. Arriola looked good, but praising the US even after fresh legs came on is hard. They looked pretty bad.

Nevertheless, Acosta stepped up to a free-kick with five minutes remaining and drilled it off the crossbar, with Wood finishing a loose rebound to salvage a crucial point. Honduran center back Henry Figueroa was sent off with a second yellow in the dying seconds, but 1-1 would be the final score.

San Pedro Sula brought extremely slow grass, ridiculously hot temperatures (Honduras intentionally started the game at 3:30 p.m. local time for the sole purpose of the 90-plus weather), and rowdy crowd (the Honduran government declared Tuesday a national holiday so every fan could come out). Getting results there is no easy task, even if Los Catrachos have not played well this year.

So a draw is good. But the performance was terrible. Let’s hope Arena fixes a lot by next month, when we resume playing must-win qualifiers. Bruce Arena’s side get to play Panama at home and Trinidad away in October’s Hexagonal finale, a good opportunity to take all six points and lock up the third spot, seeing that Honduras have to face Mexico and Costa Rica in October. Grabbing that late goal after 85 minutes of disinterested soccer is a massive relief to a US team that once looked doomed to a long flight to Asia.