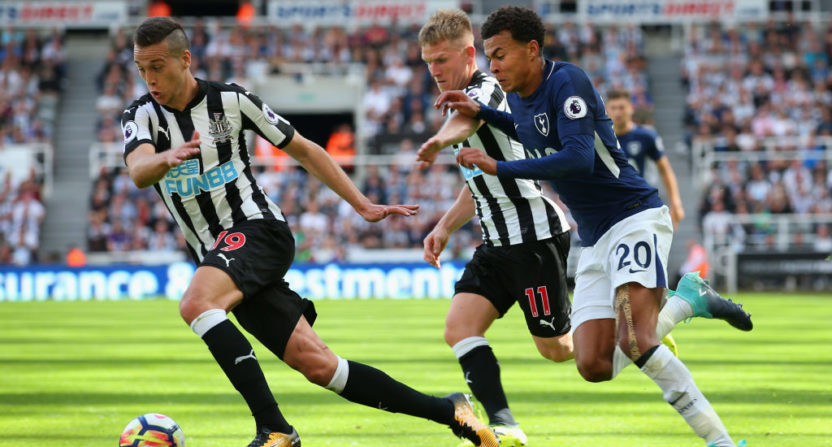 A few months ago, fans of Newcastle, Brighton & Hove Albion, and Huddersfield Town were basking in the glow of a successful run through the Championship.

Newcastle and Brighton were the dominant sides in England’s second tier last year, finishing with 94 and 93 points, respectively, while Huddersfield punched its ticket to the Premier League with a playoff run past Sheffield Wednesday and Reading.

As the new season dawns, however, the work to remain in the top flight begins in earnest. Only twice in the Premier League era, which dates back 25 years, have all three promoted teams avoided relegation in their first season. Fulham, Blackburn and Bolton managed it in 2001 while Queens Park Rangers, Norwich and Swansea duplicated the feat 10 years later.

So odds are at least one team will exit stage left at season’s end, taking plenty of memories and large parachute payments with them. The question is which team is most likely to be avoiding such a cameo?

The Magpies seem, on paper at least, set up for survival in their return to the BPL. But that doesn’t mean there won’t be drama.

They have an experienced manager in Rafa Benitez and enough tested players — like Jonjo Shelvey, Matt Ritchie and Dwight Gayle — to stay north of the bottom three.

With that said, not everything is rosy on Tyneside. The owner, Mike Ashley, continues to annoy Benitez and the fanbase with his stewardship of the club. There are rumblings of discontent, particularly with the club’s lack of ambition so far in the transfer window.

Prognosis: Nothing of note happens between now and the end of the window, which irks Benitez. The team spends most of the season a few points above the drop, and Benitez skips town for greener pastures next summer.

Chris Hughton, a former Newcastle manager, leads the entertaining Seagulls into their first season in the top flight in club history.

That doesn’t mean that they’re just happy to be here, either.

It’s easy to look at their modest work in the transfer market and develop a gloomy outlook for their chances. The Guardian’s preview points out that Manchester City, Brighton’s first opponent, spent more money on fullbacks this summer than the Seagulls did for their home park.

Keeper Mathew Ryan, left back Markus Suttner and midfielder Pascal Gross are the notable additions to a side that played an attractive, attacking brand of football for much of the year in the Championship before just losing out to Newcastle for the title.

Hughton and company will hope to emulate Bournemouth, who arrived in the Premier League a few seasons ago with a similar style and transfer mindset and have yet to leave.

Prognosis: For every Bournemouth success story, however, there are a handful of Premier League flops. Brighton has a style to be admired and a business plan that favors young players and responsible growth. They’ll have to get a little bit lucky to escape the drop, but they’ve got a fighting chance to do it.

Last summer, Huddersfield was licking its wounds after a 19th place finish in the Championship. This time around, the Terriers are licking their chops in anticipation of their first top-flight season since the early 70s.

The team’s manager, former U.S. international David Wagner, has called his team “biggest underdogs in the history of the Premier League.” While Wagner’s nationality and a plucky fighting spirit will no doubt win Huddersfield plenty of fans on this side of the Atlantic, it’s not exactly a recipe for staying power in the PL.

The Terriers used the fewest players in the Championship last term, and to their credit, have spent the summer bolstering the roster. New head of football operations David Moss has broken the team’s transfer record in the past few months, so you can’t say he hasn’t been busy.

The names of note are U.S. international midfielder Danny Williams (Reading), forward Steve Mounié (Montpellier), winger Tom Ince (Derby County) and midfielder Aaron Mooy (Manchester City). While the roster is certainly in better shape than it was at the start of June, it’s sorely lacking in Premier League experience.

Prognosis: The Terriers will defend well and be easy to cheer for, but ultimately will struggle to score enough goals to hang around past this season.