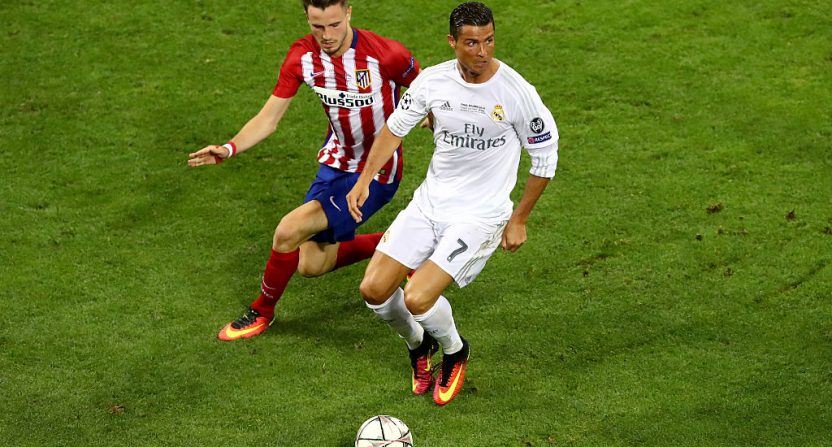 No matter who wins in the UEFA Champions League semifinal, we are going to have a great final featuring two teams trying to fulfill an incredible achievement.

Real Madrid would extend their record with their 12th title and would become the first team to win back-to-back titles in the Champions League era. Atletico Madrid and Monaco have both lost in the final and have never won, so a first win would be great. And while Juventus have won two titles, they haven’t won since 1996 and a win would give Gianluigi Buffon his first Champions League title.

But before anyone can even think of hoisting that trophy on June 3, they must get past a tough semifinal first. One features a cross-town derby that had been featured the past three seasons in the Champions League. The other features the young guns who got through some of the best against the old guard who have been around the European block a time or two. The soccer staff at The Comeback did our best to prognosticate who is advancing to the Champions League final in Cardiff.

Juventus has been so good this season that they’ve been able to focus entirely on the Champions League, and their rock-solid defense will flummox Monaco more than Manchester City or Borussia Dortmund were able to. Considering they have so much going forward as well, this seems like their year to advance back to another final.

And in another Champions League edition of the Madrid Derby, Real Madrid’s split focus on La Liga and this tie, combined with Atleti finally being due to get one over on their rivals in this competition means Diego Simeone and company will make a third Champions League Final in four years.

Juventus promo video for #MonacoJuve remade with the #TrueDetective Season 1 theme – Its so much better [thanks @Alexrus4444 for the link] pic.twitter.com/zT5nTuTG1J

In this first matchup, it would be so easy to pick Real Madrid without a second thought. Real are 10 points ahead of Atletico in La Liga and are unbeaten against them this season. That said, Atletico know how to work a tournament and remain a well-drilled team. But I’m going to have to go with Real Madrid. The last three Champions League seasons has seen Real knock Atletico out. The team is on fire and should be able to win this. It won’t be an easy game, but Real should move on to the final.

The Juve/Monaco matchup is a bit different. Juventus should be one of the top teams in the world. They have money, a great manager and can waltz to the league each year. They just haven’t made that final jump yet. Monaco, on the other hand, are a young, exciting team that has so much talent that it’s hard to overlook them. This is definitely a match between the head and the heart. I would love to see Monaco in the final, but my head just says Juve.

The Madrid Derby I see as being back-to-back cagey 1-1 type affairs. The difference is, I don’t see Atletico scoring more than one goal in either game, and ultimately I think Real finds that second goal in one of the legs.

What happens when a high scoring offense takes on a team that no one scores against? If history is any guide, the defense is what usually shuts them down (see Atletico vs. Bayern Munich last season and Atletico forcing Real to extra time in those two finals). The difference in this one is that Juventus has more firepower than Atletico Madrid did so extra time won’t be necessary. Monaco has been overlooked at every stage of this competition but I think Juventus is just too much for them.

With Atletico Madrid, the only team that has been able to knock them out of the Champions League in recent years has been their cross town rivals. Real Madrid have knocked out Atletico in each of the past three seasons. So fourth time’s the charm?

With Real, there is a sense that they’re lucky to be here. The were taken to extra time by Bayern Munich in the last round, but advanced thanks to some advantageous referee decisions. With a loss to Barcelona, the League title race opened up as well. Los Blancos can’t afford any slip ups in La Liga with their greatest rival breathing down their neck. Fighting on two fronts so late in the season could take it’s toll against such a tough team to play agianst.

Atletico have less to fight for. They aren’t in the domestic cup and their place in next season’s Champions League is secure. If they’re going to knock off Real Madrid, now is the time to do it. There is also the feeling of a last hurrah with this side. Questions regarding the future of their manager Diego Simeone and striker Antoine Greizmann could give the club some extra motivation. Finally, the first match is at the Bernabéu, meaning if Atletico can somehow grab a draw and an away goal they’d be in a good spot heading home for the second leg. The Vicente Calderón has been a fortress for them.

The second semifinal is a real clash of styles. Monaco’s high-flying offense meeting the seemingly impenetrable defense of Juventus. If the mantra “good defense beats good offense” rings true, then I’d expect Juventus to get through here. It would also be a great story for Gianluigi Buffon to get another chance at European glory. I’d say one last chance, but Buffon could keep going for a few more years, and it’s unlikely anyone would complain.

For Monaco, to have any chance they’ll need a big performance from Kylian Mbappe. The 18-year-old has been a sensation this season, and has made some very good teams look silly in the last two rounds. Juventus provides a different challege however. The Italians held Lionel Messi, Luis Suarez and Neymar scoreless for two legs in the quarterfinals. Surely a teenager will be little trouble. I expect the scoreline to be close, but for Juventus to be comfortable throughout the tie. Especially if Paulo Dybala and Gonzalo Higuain can score a few at the other end.

No offense to Real Madrid but I’m rooting for three teams for the rest of the Champions League. Atletico Madrid and Monaco have never won Champions League after coming so close so it would be great to see one of them win. And Juventus so that Gianluigi Buffon can finally complete his storied career with his first Champions League title.

But I have to look at this logically and that means relying that the 11 time champions are going to eliminate for the fourth straight year. Yes, they need to worry about Barcelona in La Liga but they have a game in hand on Barcelona and their toughest game is a home game against Sevilla. Unless the wheels completely fall off, Real Madrid should have nothing to worry about in winning La Liga. They will be concentrating solely on their rivals and the Champions League and should be just fine.

Juventus and Monaco is a classic battle between the unstoppable force of Monaco’s attack versus the immovable object that is Juventus’ defending. Monaco is the great story of young talent but they just don’t have the defending to defeat the impending Serie A champs.