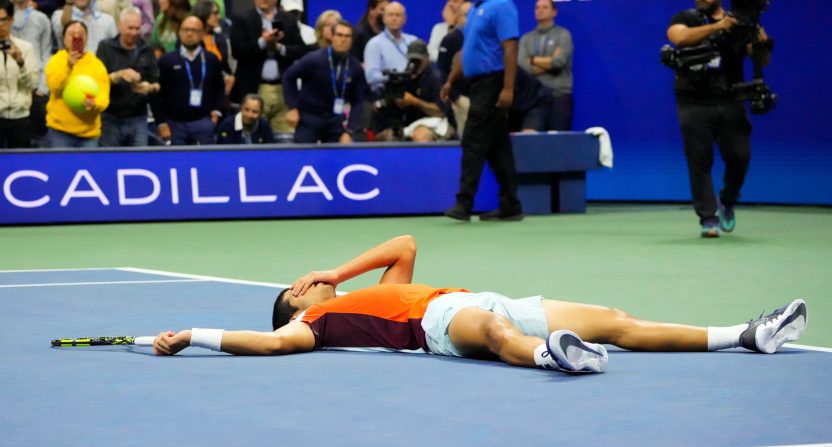 The men’s quarterfinals at the US Open on Wednesday night — and into Thursday morning — were incredible.

First, Frances Tiafoe followed up a fourth-round victory over Rafael Nadal with a win over No. 9 seed Andrey Rublev. Tiafoe becomes the first American to reach the semifinals since 2006, and he’s the first Black American man to reach the men’s semifinals at the US Open since Arthur Ashe did so in 1972.

And in the nightcap, tennis fans were treated to an all-timer.

It was also the second-longest US Open match ever, at five hours, 15 minutes (11 minutes shy of the record).

It’s unfortunate that somebody had to lose this match that featured elite tennis play all the way through.

This level of tennis after more than 5 hours is insane. #USOpen 🎾 pic.twitter.com/h31mbFpxqN

Ultimately, Alcaraz came out on top, and he capped it off with an ace on match point.

Carlos Alcaraz with the ace to win the latest finish — and second-longest match — in #USOpen history!

What an incredible marathon.🎾 pic.twitter.com/aBZwBJO5V7

Now, Alcaraz will face Tiafoe in Friday’s semifinals, and that certainly won’t be lacking in storylines.

Tennis fans that stayed awake were blown away by the epic match:

CARLOS ALCARAZ WINS ONE OF THE MOST INCREDIBLE MATCHES IN TENNIS HISTORY pic.twitter.com/Cfql1pCwJ4

It’s 3am and Carlos Alcaraz is still signing autographs after playing tennis for 5:15… after throwing two of his shoes into the crowd. pic.twitter.com/Zl8KP6VI1C

this match is insane. I leave at 6am for the airport but I refuse to sleep and miss this. #Sinner #Alcaraz

Carlos Alcaraz has taken plenty of punches this summer as he has adjusted to playing with a target on his back, and so many tonight alone. What an unbelievable show of resilience. Crazy, crazy match.

In 5 hours and 15 minutes, 19 year old Carlos Alcaraz wins one of the greatest tennis matches of all time over Jannik Sinner to make the US Open semifinals. Special kid. Special tournament. Special sport.

When a match elicits that kind of question, you know it has done something significant and globally resonant for a sport which needed to know its future is in good hands.