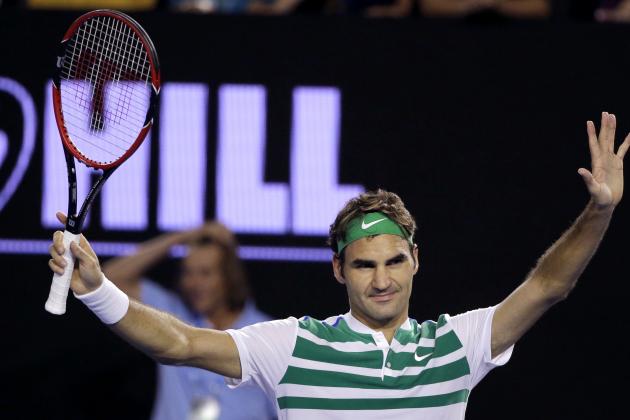 On the same day Maria Sharapova notched a significant milestone at the Australian Open, Roger Federer registered another.

As far as third-round Fridays go at major tournaments, this one in Melbourne, Australia, carried a lot of historical resonance in the larger story of professional tennis.

More on Sharapova in a bit, but let’s start with Federer.

The 34-year-old plays for the history books almost every time he takes the court in a major tournament these days. Friday, Federer’s messy but productive four-set win over Grigor Dimitrov didn’t just usher him into the round of 16, something he failed to do last year in Melbourne Park; the win gave him 300 major-tournament singles wins, making Federer the first man in history to achieve the feat:

Start with the breakdown of wins by each of the four majors. Federer has won 78 or 79 matches at the Australian Open, Wimbledon, and the U.S. Open, 65 at the French Open. Consistency at all four events propelled Federer to this point. The French Open total is lower for two basic reasons:

At the other three majors, Federer has been remarkably consistent for a solid decade. Only three times since 2004 has the Swiss failed to make the quarterfinals of a hardcourt or grasscourt major (2013 Wimbledon, the 2013 U.S. Open, and the 2015 Australian Open). Even at the French, his weakest major, he’s made the quarterfinals or better in 10 of the last 11 years. That means he’s collected at least four wins (usually a few more) at virtually every major for more than a decade. That’s how you become a pioneer in men’s tennis history.

Here are two snapshots of what that consistency looks like:

Another record for @rogerfederer…

Fed, Rafa, Djokovic each with a better than a 6-1 record. That's averaging a finals run every slam they play. https://t.co/nlXhrAC1ST

You might think that with 300 wins at the four biggest tournaments in tennis — 102 more than Rafael Nadal — Federer should have more than 17 major titles. Here’s how that stat exists in context: Nadal has not played in as many majors due to injuries at different points in his career, limiting his overall number of matches played. However, when Rafa has played, he’s maxed out (at least before this recent decline in both form and results).

Federer might have lost a lot of major finals and semifinals to Nadal (and more recently, to Novak Djokovic), but all those years of making finals or semifinals have stacked up the wins. They offset the early years of Federer’s career — before 2004 — when he hadn’t yet figured out how to get the most from his talents.

Federer is, quite simply, the Jack Nicklaus of tennis. Nicklaus didn’t just win 18 major golf titles; he finished in the top three in 28 other majors he didn’t win (19 second-place finishes, nine third-place finishes). Federer’s track record in tennis most closely parallels the Golden Bear, and that’s why he’s the first man to hit 300 match wins at the four Grand Slam events.

While Federer reached a big milestone on Friday at age 34, another 34-year-old in the women’s tournament showed that she’s hardly slowing down:

Serena Williams doesn’t seem to be the slightest bit hampered by an injury which led her to withdraw from an Australian Open warm-up event earlier this month. She blitzed Daria Kasatkina, 6-1, 6-1, in just 44 minutes, to advance to the fourth round. She’ll be rested for the weekend, in ideal position to conserve energy for the back end of the tournament. Her first week in Melbourne could not have gone any better.

Now, to Sharapova, who could face Serena in the quarterfinals:

Sharapova has been slowed down by injuries at times in recent years, but her persistence and work ethic have carried her to a place few of her peers have reached. She’s not only the 17th woman to reach 600 career wins, but she’s the fourth active WTA player to attain that achievement. She has all the wealth and fame an athlete could want, and yet she strives to make herself better each day she wakes up.

She unfurled this gem of a quote after her third-round win over Lauren Davis:

Sharapova, in rare form: "Although i'd love to sit on a beach and read a book and drink margaritas, after a couple days I get bored"

That’s why Sharapova has 600 wins to her credit, and a spot in the fourth round of this tournament after a long injury-caused layoff.

Then there’s Novak Djokovic, who powered past Andreas Seppi in straight sets to book a spot in the round of 16. Seppi, you might recall, stunned Federer in the third round of last year’s Australian Open. Djokovic would not allow the Italian to pull off another shocker. He rolled in the first set and then fended off his opponent in two closely-contested sets to proceed into the fourth round without having to play a fourth set. Getting off the court quickly in week one of a major helps the top professionals to be ready for the second week. Djokovic is very much on schedule in the pursuit of a sixth Australian Open title.

Elsewhere on Friday in Melbourne, Tomas Berdych responded well to difficult circumstances. Playing host-nation favorite Nick Kyrgios, Berdych calmly withstood a third-set barrage and unloaded multiple winners to break Kyrgios in the tenth game of the fourth set. That break of serve closed out a hard-fought four-set win which denied Kyrgios a chance to make a second straight Australian Open quarterfinal appearance. Berdych is one win away from meeting Federer in the quarterfinals.

Berdych’s opponent in the fourth round is Roberto Bautista-Agut. That fact is significant because Bautista-Agut knocked off 2014 U.S. Open champion Marin Cilic in the third round. Cilic continues to show that he’s a one-hit wonder, unlike Stan Wawrinka, who won his second major title last year at the French Open.