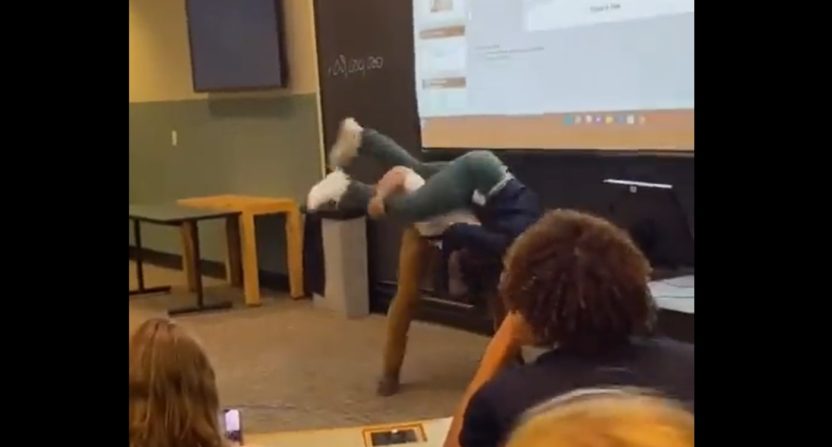 Plenty of students have gotten into a heated match with their teacher or professor. Usually, though, those bouts remain respectful verbal discussions, not intense wrestling matches.

At UConn, however, one student allegedly had “beef” with their professor. And the two attempted to settle it by creating a makeshift wrestling ring in front of the class. Students arrived at class expecting a lesson in “the entrepreneurial journey.” Instead, they cheered on one of their classmates as he attempted to pin the professor.

When you challenge your college professor to a wrestling match in class 🤼‍♂️ pic.twitter.com/1CIScOp13d

I admittedly don’t know anything about wrestling, but as an uninformed spectator, it seems like the scholar and the student both have some sort of background in the sport. It also appeared like the professor had multiple opportunities to end the match, but chose to take it easy on his pupil. The bout was fine, but the real champion was those suspenders, which impressively held strong for a solid 60 seconds.

“That was a scramble, much better than your brother!” the professor could be heard saying at one point, suggesting this wasn’t his first wrestling match.

No injuries occurred and the scrap was clearly in good fun, with the professor even imploring the class to offer a round of applause for the student. But this viral video may nudge UConn to update their Student Handbook, either warning of spontaneous wrestling matches, or suggesting they be brought to a larger space with less walls and computer screens around.