There is a great probability the Denver Nuggets finish well outside the playoffs in the loaded West. What has so many excited about their upcoming season, however, is their malleability as a franchise. The Nuggets are young and devoid of a single albatross contract. Their core pieces (Emmanuel Mudiay, Jusuf Nurkic) are 19 and 21, respectively. Kenneth Faried, Danilo Gallinari and Wilson Chandler are in their primes and appropriately priced.

The Nuggets own a pick swap with the troubled Knicks in 2016. Barring an improbable playoff run by the Knicks, the Nuggets possess double odds of landing a lottery bonanza. In the same spirit that teams like New York and Brooklyn should “win now” after parting with their picks, Denver should play dead in the West to increase its odds of landing a Top 5 pick in 2016 — either its own or New York’s.

Other future draft considerations (likely) include a low first round pick from Houston in 2016, a mid-to-low first from Memphis in 2017, and a pair of second rounders from Portland beyond 2018. Denver will be adding a bevy of young talent over the next three seasons, to be sure.

Mudiay fell to Denver with the No. 7 pick, perhaps the steal of the draft. The Nuggets retained veteran floor general Jameer Nelson to mentor Mudiay — one of my favorite moves of the summer. By every indication, the 2015-’16 season in Denver is about introducing Mudiay and Nurkic as the future of the team. Everyone else could seemingly be a phone call away from being shipped out.

There’s no reason for Denver to be hasty, though. It will give the season a month or two before powerfully choosing a direction — something the organization never did during the waffling transition years from George Karl to Brian Shaw.

By utilizing an advanced C.B.A. provision and extending Gallinari and Chandler during the summer, Denver has transformed two of its best assets from looming free agents with huge question marks to calculated risks on competitive deals. If Gallinari ($14 million) and Chandler ($10 million) make it to January on both feet, contenders will come calling. The Nuggets could be 10 games out of the playoff race by that point; why not make a deal? 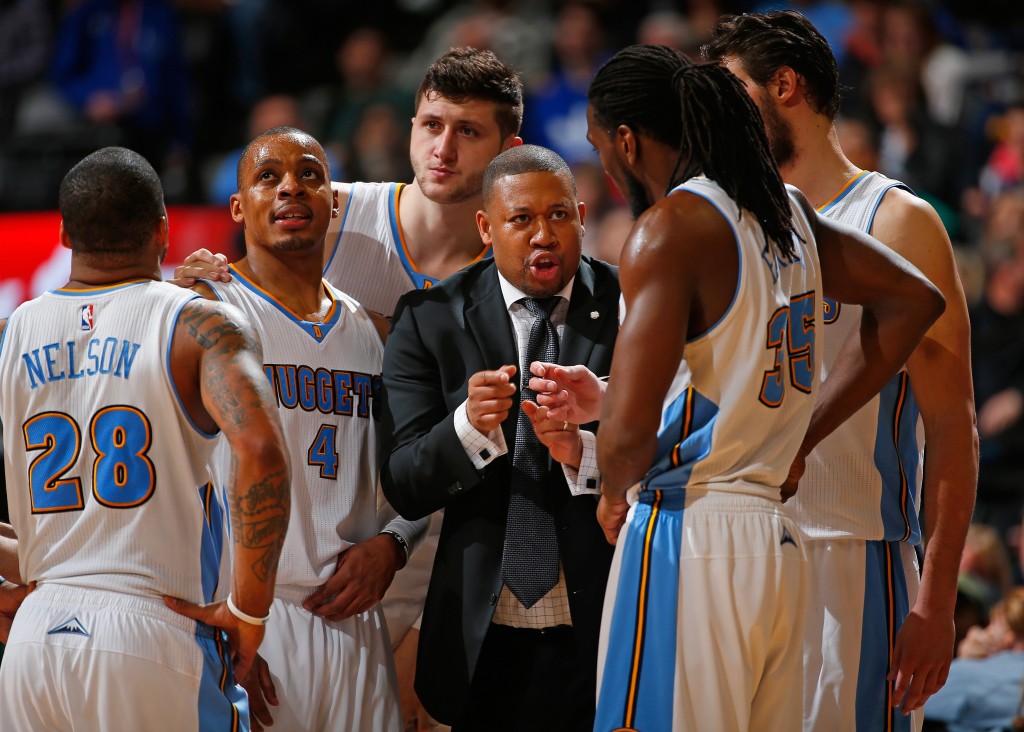 The same philosophy can be assigned to Faried. The 25-year-old is under team control through 2019 on an escalating deal worth $11.2 million now and $13.8 million in 2018-’19. That’s peanuts for a player of Faried’s ability in a vacuum. He’s hovered around 12 points and nine rebounds per game for three seasons. Faried gets off the floor like a rocket ship, and he has a clean bill of health.

Tristan Thompson is haggling for a max-contract from Cleveland with a similar skill set. It’s not difficult to imagine Faried thriving in the Thompson role — running pick-and-roll and pass-catching for LeBron James, and selling out for rebounds like during his Moorehead State days.

Of course, this is what makes Faried an enigma in today’s league. He’s 6-foot-8 with no perimeter game whatsoever. His career averages in blocks and steals both fall under 1.0. The Manimal has improved as a post-up during his career, but last season’s mediocre group failed on both ends — he’s something less than a foundational piece for a charmed contender.

One year ago, Faried was celebrated for a breakout summer with Team USA during the FIBA World Cup. His role was clearly defined: clean the glass, run out on fastbreaks, and defend. He was sharing the American frontcourt with Anthony Davis, the exception to every rule, obviously, but a player who has elementary skills conducive to Faried’s game.

Davis can work away from the basket, and has developed a deadly midrange jumper. He’s a world-class shot blocker, enabling Faried to take ownership of the glass and covering for his lack of rim protection. The tropes of the PF/C positions melted away with the Faried/Davis pairing — the combination of their skills cooked up an exemplary frontcourt.

I bring this up because Nurkic is clearly not Davis. The big guy needs the ball on the block: Nurkic attempted 58.7 percent of his field goal attempts from inside the restricted area, and he shot 52.4 percent, per NBA.com.

Then there’s this: 85.6 percent of his attempts came within eight feet of the basket (on 46 percent shooting), and he attempted just 55 shots beyond that range (36.4 percent).

Nurkic is a traditional center. I’d imagine much of Mike Malone’s hiring has to do with his track record of growing DeMarcus Cousins into a respectable interior defender, and his construction of a modern offense around a domineering 5. Cousins thrived, to no one’s surprise, when Malone surrounded him with premium shooting — a commodity, for whatever reason, Sacramento found so damn difficult to acquire.

In today’s landscape where power forward is evolving into a third wing spot, Gallinari and Chandler have great potential as small-ball 4s. I’m anxious to see them dotted around Mudiay/Nurkic pick-and-rolls, and it’s possible Malone leans on these types of lineups in 2015-’16 as he develops a feel for his cornerstone talents.

Nobody can be sure what Faried’s market looks like, and it’s unclear if Denver is willing to part ways with a team-controlled asset of Faried’s ability. But he and Nurkic are not a natural fit together. There will be suitors for Faried during the season, and again next summer, when the league will be chock-full of teams with money burning holes in their pockets. What Denver does will say a lot about their direction as a franchise.