With CBR’s Big 12 Preview Week drawing to a close, it’s time for our staff to give some bold predictions for the conference in the coming season.

Allen Kenney: I dont think people realize just how miraculous of a season Kansas St. put together in 2011. The Wildcats won eight of nine games decided by a score or less. Statistically speaking, that’s like Michael Felder not having a coozie in his back pocket. We’re talking about the least talented team from a BCS conference to ever reach double-digit wins on the season. There’s no debate.

There’s no reason to expect Bill Snyder can cast another spell on the Big 12 with that kind of power this year. The pendulum has swung too far the other way in terms of expctations this year, though. Vegas has set KSU’s win total in the range of seven. I just can’t see the Wildcats falling off that much. Collin Klein will keep on clubbing opponents and not-mistaking to the tune of eight regular season wins at a minimum.

Tom Perry: I guess I’m still so giddy that my Mountaineers got out of the Big East and will be playing a Big 12 schedule this year. I’m so excited I purchased season tickets for the first time ever (there is no way I am missing Oklahoma playing at Mountaineer Field).

I feel expectations are way too high… Morgantown feels like Tallahassee in the summer that I just hope WVU can avoid the early season letdown. The big win over Clemson in the Orange Bowl was both a good and bad thing for the Mountaineers.

I agree with Allen that K-State is an average team that won’t come close to replicating last year’s success, but I’m trying to figure out who that team will be. Texas Tech? I guess I have a lot to learn about the Big 12. I do know Oklahoma State is the defending champ, but I don’t see them repeating.

It’s also going to be interesting to see how TCU adjusts to playing a big boy schedule. The Horned Frogs could be the surprise team. So after that ramble, what do we have? 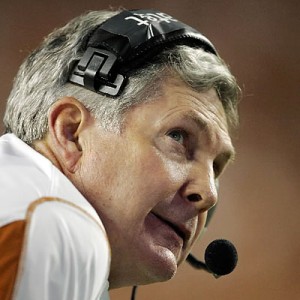 It’s not a matter of not having talent at UT, and I’m not 100 percent sure what the issue is, but I know there is something wrong with the staff under Mack Brown, because you don’t suddenly go from perennial 10-12 game winners to 5-7 and 8-5 the next w/o issues on the coaching front. You can’t recruit talent and just expect them to live up to it.

Well, that and issues at QB have killed this team. Part of it is overhyped players and part of it is coaching.

They seem to have a little more faith in David Ash, but it’s only a little, as they didn’t name him the starter out of spring ball and will have to square off with a McCoy to earn that spot.

They also have to replace the entire middle of the defense, as gone are the anchors of the best defense Texas has had in quite some time. While I’m not worried about the DTs as much, it’s the loss of two of three LBs from last year that could hurt this team.

Oh, and let’s not forget that Texas also needs to find a punter, kicker and kickoff specialist as do-it-all specialist Justin Tucker is gone.

We’ve seen how important the kicking game can be countless times in the Big XII. Combine that with an unsettled QB position once again, and I don’t like their chances of winning 10 or more games, let alone eight.

Aaron Torres: Well, Andy, now this is where it gets interesting… because, well, my big prediction for the 2012 season is that not only does Texas get seven wins… but, the Longhorns win the Big XII title and play in the Fiesta Bowl. Now, to be fully transparent, a lot of it has to do with the fact that I just wrote a piece on “Why Texas can win the Big XII” (and my argument here is the crux of my argument there). Still, I had this belief even before I started the article.

But still, let me make the counter to your argument here.

First off, I don’t think there’s anything “wrong” with the staff under Mack Brown. Was there two years ago, when Greg Davis’ offense was so archaic that Texas’ playbook was chisled into a rock with a hammer? Yes. But now? I think they’re headed in the right direction.

Regardless of whether you think Manny Diaz and Bryan Harsin are perfect fits, what you can’t deny is that these things take time. It takes time to install new schemes and systems, and just as importantly, it takes time for the players to get comfortable in them. And you know what else takes time? For the coaching staff to get comfortable with each other too. Remember, Davis had coached with Mack Brown going back to the UNC days. Will Muschamp had been at Texas for awhile. Some of the other coaches were too. So in the same way that the players were feeling out Diaz, Harsin and the rest of the new staff, so too was Mack Brown.

As for your other concerns, let’s start with the defense. For one, they finished 11th nationally in total defense last year, not too shabby for a team playing in the first year of a new system under a new coach. Heck, as our pal Allen Kenney has pointed out to me multiple times, the only thing that may have kept Manny Diaz from getting a head coaching gig last year was one big day from RG3. At linebacker Jordan Hicks (who was sixth in tackles) returns, and if you talk to Texas insiders Steve Edmond is going to have a MONSTER year. Remember too that in the Big XII, where everyone wants to put up 70 on you, DB play is equally as important as linebacking play. Texas returns basically everyone.

And as for the quarterback position, I’m not as concerned as most. David Ash was clearly their best guy by the end of the last year and, unless lightning strikes him, will be the starter on Day 1. Ask most folks who follow the program and they’ll tell you that the only reason Ash wasn’t named the starter out of spring ball is for selfish reasons on Mack Brown’s part; after Garrett Gilbert skipped town last fall, he didn’t want Case McCoy doing the same this summer.

Factor in real running back depth, a couple solid receivers and a VERY manageable schedule (the Horns first really tough road game is at Kansas State… on December 1) and I think the pieces are in place for Texas to make a real run at this thing.

If they don’t win the conference outright, I think they’re going to be the proverbial “they’re just putting it together now, look out for them in the fall of 2013” club.

Michael Felder: Aaron, you hit on what I was getting ready to type with respect to Texas. My only addition here is that as long as David Ash does not screw it up by throwing interceptions, the three-headed monster of Malcolm Brown, Joe Bergeron and Jonathan Gray is going to be a major force to be reckoned with. You know, for those of us who’ve been paying attention, the renaissance at Texas has been nothing short of exciting as they transition back to a pro-styled attack and the offensive line gets better and better. Those kids who played a couple season ago are men now, and that’s the best part of the Texas offense.

As for other Big 12 predictions, Baylor and Oklahoma State return to earth. Gary Patterson proves that his “slow and steady” approach to building up TCU is the right way to do it by staying in the Big 12 title race until November. And the Sooners get back to a BCS Bowl game. This is Oklahoma’s title to lose, and for the first time in a while the team has got a legitimate, not a fabricated, chip on their shoulder. This is not 2009 where things got weird with the Bradford injury. This is a team that got embarrassed on defense and a quarterback who returns to prove that he’s got all the tools.