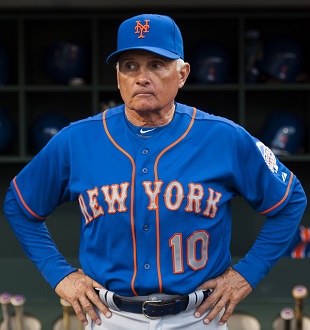 Going into the 2013 MLB season, the general consensus was that Los Angeles Dodgers manager Don Mattingly had the most pressure on him this season. Los Angeles Angels skipper Mike Scioscia probably ranked a close second.

If neither of those teams made the playoffs — or played below expectations during the regular season — after their respective ownerships shelled out big money for top talent, it's not difficult to imagine Mattingly or Scioscia being held responsible for that failure.

But could New York Mets manager Terry Collins actually be in the most immediate danger of being fired? Is he the one riding the proverbial hot seat as the schedule moves into the second month of the season?

That seems to be the scuttlebutt surrounding the Mets in light of a six-game losing streak, depending on which writers and analysts you choose to follow.

Bob Klapisch of the Bergen Record points out that Collins hasn't received much confidence from ownership and the front office, going into this season on the last year of his contract. If he truly had support, wouldn't he at least have been offered a one-year extension to avoid so-called "lame duck" status?

Never mind that Collins wasn't given much to work with this season. Other than signing third baseman David Wright to an eight-year, $138 million extension, the Mets did little to build an on-field product that could compete with the Washington Nationals, Atlanta Braves and Philadelphia Phillies in the NL East.

National League Cy Young Award winner R.A. Dickey was traded to the Toronto Blue Jays. Though the prospects received in that deal — such as catcher Travis d'Arnaud and pitcher Noah Syndergaard — give the Mets a promising future, those players do little to help Collins in the here and now.

The outfield badly needed an impact player, yet the Mets showed little interest in pursuing top talent at that position. No one was expecting the Mets to go after Josh Hamilton, especially considering the team's precarious financial status under owner Fred Wilpon. But with free agents like B.J. Upton and Nick Swisher available and players such as Shin-Soo Choo and Denard Span on the trade block, the Mets didn't budge.

General manager Sandy Alderson did show interest in center fielder Michael Bourn when the open market left him as one of the last prominent free agents to be signed. But few teams wanted to offer a large contract to a player whose game is based on defense and speed, rather than power and run production. Bourn also would have cost a first-round draft pick due to free agent compensation rules, a price that a rebuilding team like the Mets couldn't afford to pay.

That left the Mets with an opening day outfield of Lucas Duda, Collin Cowgill and Marlon Byrd — arguably the worst starting trio in MLB. Mixing in Mike Baxter and Jordany Valdespin didn't make things much better. How exactly is Collins supposed to win games under such circumstances. 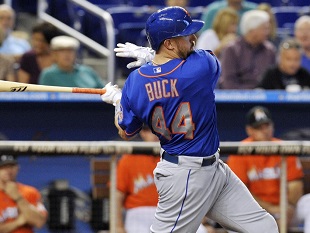 Yet the Mets have been relatively competitive this season, thanks to some breakout performances in April.

Matt Harvey has emerged as one of the top starting pitchers in the NL, compiling a 4-0 record, 1.56 ERA and 46 strikeouts in 40.1 innings in his first six starts. John Buck — not considered one of the key pieces of the R.A. Dickey deal — has been a significant run producer, slugging nine home runs with a NL-leading 27 RBI.

While the Mets held fourth place in the NL East as of May 1 with a 10-15 mark, they were only one game behind the Phillies and two behind the somewhat disappointing Washington Nationals.

Even if that record isn't terribly impressive, shouldn't Collins get some credit for the Mets hanging in the race early in the season? If the expectation is for the team to eventually fall further behind the Phillies and ultimately fight the Miami Marlins for last place in the division, doesn't that indicate Collins never had much of a chance to begin with?

Considering the circumstances, it appears that Collins is actually doing a pretty good job managing the Mets. And it just so happens that the team might feel the same way. Andy Martino, Mets beat writer for the New York Daily News, reports that Collins' job isn't in jeopardy. He's not on the hot seat.

That doesn't mean that the Mets will renew Collins' contract and bring him back next year and beyond. But it does seem unlikely that he'll be fired during the season, regardless of how many games the team wins and loses.

If Collins loses his players, that would obviously be a consideration. Maybe losing two games to the Marlins this week was a signal to some that the Mets were no longer playing for their manager. But there seems to be no indication that the players have tuned Collinsout or turned on him.

Closer Bobby Parnell was reportedly upset about not being used in Tuesday's 2-1 loss to Miami when there was a 1-0 lead to protect going into the ninth inning. But Parnell had pitched in each of the Mets' previous two games and Collins didn't want to wear his closer out.

That was reminiscent of Collins ticking off Wright last season by pulling him from a game after Mets reliever D.J. Carrasco hit the Milwaukee Brewers' Ryan Braun with a pitch. Wright was set to bat in the following inning and was almost certain to get plunked in retaliation. Wanting to avoid his best player possibly getting hurt — especially in an 8-0 ballgame — Collins took Wright out of the game. Wright was furious, feeling that his manager undercut him as a team leader.

But it was the right call. Nothing would have been accomplished by letting Wright go to the plate. What if he did end up getting hit by a pitch in the hand or arm and suffering a serious injury? Collins made the best decision for his player and his team.

The Mets manager also kept the respect of his players last season by continuing to stick with Frank Francisco as the team's closer when he kept giving up runs and blowing leads. Even when an elbow injury sidelined Francisco, Collins gave him a chance to keep his job when he returned.

Players deeply value that sort of thing, which is why the Mets continue to play for him. If the team is losing games, it's not because there's a lack of motivation or a disdain for the manager. It's because the roster doesn't have enough talent. That doesn't fall on Collins.

Is Collins the manager who can lead the Mets to contention, if and when Alderson puts together a roster that can compete with the Nationals, Braves and Phillies? Maybe not.

It seems pretty clear that Collins was hired to get this team to a certain point, only to be replaced once the team contends for playoff spots and division titles. Wally Backman, currently the manager of the Mets' Triple-A team in Las Vegas, is probably being groomed to take over eventually. He'll surely be a popular choice with Mets fans and deserves a shot to manage in the major leagues. It will be a nice story. But will it really be fair?

We see this in sports all the time. Placeholder coaches are brought in for turnaround projects. (Many coaches have made a living from it.) They're hired to teach players how to win, how to conduct themselves as professionals. They're supposed to restore teams to respectability. Then someone else comes in to enjoy all the glory if the project culminates in championship success.

That appears to be Collins' fate with the Mets. In my view, he's already been far more successful than could have been expected. When the Mets initially hired him, it looked like a bad idea to me.

After burning out and setting his career on fire in failed tenures with the Houston Astros and Anaheim Angels, Collins has shown he's learned from his mistakes. He relates to players better. He paces himself throughout a long season. He's become the right manager for the Mets at this stage of their development.