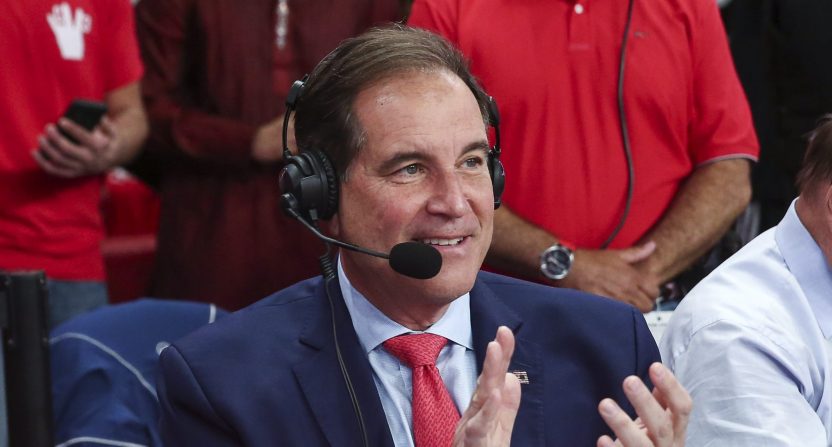 The NCAA Tournament is going to sound very different in a few years with the news that Jim Nantz will step away from calling March Madness following the 2023 edition.

Per the New York Post, Nantz will step away from the CBS/WBD Sports coverage following the upcoming NCAA Tournament, which is being held in Houston.

Nantz will continue to be the voice of both the Masters and NFL on CBS, so he’s not retiring altogether. But the big reason for cutting down on his busy schedule is the desire to spend more time with his family.

“It is time with two young children and an older daughter that I spend more time at home,” Nantz told the Post. “Daddy needs to be home.”

It’s a true changing of the guard for a generation of college basketball fans as Nantz has called the tournament since 1986, initially as an announcer, before becoming the voice of the Final Four in 1991 after Brent Musburger left. Now, Nantz will be replaced by Ian Eagle, who signed a new deal with CBS last year.

Nantz did say that as part of the arrangement he will continue to handle the trophy presentation, so he’s not going to be gone altogether.

It’ll be interesting to see if Eagle continues to work with Jim Sparnarkel during the NCAA Tournament or if he shifts over to work with Grant Hill and Bill Raftery unless the latter also chooses to stop calling March Madness soon as well.

In the meantime, the news that Nantz’s 32nd Final Four will be his last as an announcer certainly got sports fans in their feelings.

This is a baller move from Jim Nantz. He doesn't have to call games and will still get to be a part of the CBB title game. https://t.co/3SQ4ra8Myt pic.twitter.com/7zwubHWuHT

Quite a run for Nantz. Leading voice of the Final Four/NCAA Tournament for a long, long time. He should bequeath his tie to himself this year. https://t.co/a0qn3PEDZa

Damn, that's unexpected, but awesome to see Ian Eagle will get the nod. One of the best national voices in sports for both basketball and football. Love it. https://t.co/qHJEp6jFQy

Whoa. I hate this. Nantz has such a big game voice. You know it's the Final Four when you hear him. Eagle logical pick.

Still wish it was Gus and Raft together https://t.co/dsqCCOjYo7

They're going to need dozens of extra announcers after the conference commissioners expand the NCAA Tournament to 711 teams. https://t.co/ySvcElcfdn

Ian Eagle is the best. Glad we will hear his voice for these games! And that's absolutely no disrespect to Jim Nantz, another all-time great. https://t.co/tPGxNP1WgG