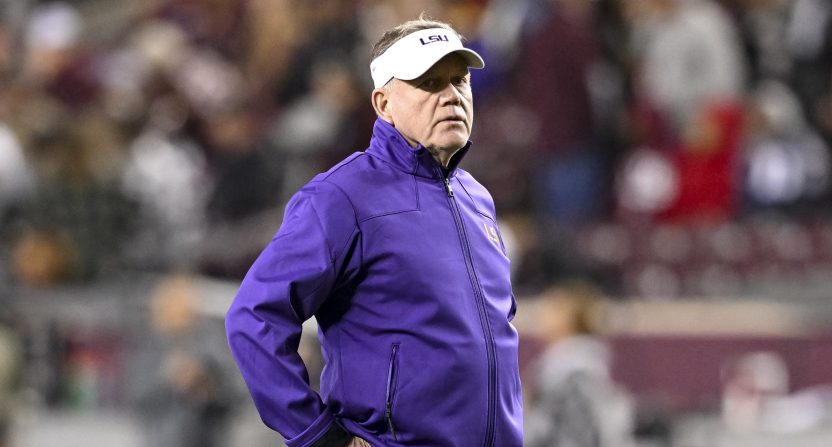 After Ohio State was routed at home by Michigan, No. 5 LSU’s path to the College Football Playoff seemed set. Beat Georgia in the SEC Championship Game on December 3 and a trip to the CFP would likely be in the cards. That’s not an easy path — but everything was laid out clearly for the Tigers. Only, LSU had one final chore before the SEC Championship Game — the regular season finale against Texas A&M. That’s where things went horribly awry for Brian Kelly and company.

With the game tied at 17 in the third quarter, the Aggies defense came through with a big play to put Texas A&M ahead.

It wouldn’t get any better for the Tigers.

Texas A&M added another touchdown on the first play of the fourth quarter, then scored another later in the quarter to go up 38-17.

LSU has some work to do. pic.twitter.com/a0VmuS3Q6H

Shaping up to be a great night for USC. For Notre Dame (and one of its former coaches), not so much.pic.twitter.com/xC11ipzxsL

LSU eventually scored a touchdown of its own. Unfortunately for the Tigers, even that came with some baggage.

The touchdown left LSU down 38-23. While there seemed to be little to gain by doing so, Kelly elected to go for two. The attempt failed. The decision was bad enough. Making matters worse, quarterback Jayden Daniels was hurt on the play.

After finally getting back in the end zone, LSU goes for two and misses. Worse, Jayden Daniels gets hurt on the play. Terrible night for LSU. pic.twitter.com/HTtUGxzvdL

Fortunately, Daniels did return to the field for LSU’s next offensive possession. But by that point, it was too late. The Tigers turned the ball over on downs and Texas A&M ran out the clock to seal a 38-23 win over LSU.

While Kelly’s accrued a fantastic record as a college head coach, his teams do not have a great reputation in big games. That reputation will not be aided by what unfolded in College Station on Friday.

brian kelly takes this team to play georgia, in atlanta, in front of everyone https://t.co/CjDhSm0LWJ

I just imagine Brian Kelly cursing out his players in a faux southern accent.

Sure, Notre Dame is losing, but a Brian Kelly coached team is getting smoked with actual CFP stakes and it’s not the Irish!

Sorry, LSU. This is just part of the experience.

I am going to need the Butch Jones chart sheet to figure out why Brian Kelly went for the 2-point conversion… pic.twitter.com/RsBV9iuzyi

Given the opponent, this loss was particularly brutal for the Tigers. Outside of pride, very little was on the line for the Aggies. The win moved Texas A&M to 5-7. So unless some wild scenarios unfold, the Aggies will not be playing in any bowl game.

So, while Texas A&M didn’t gain a lot from the win, the loss was crushing for LSU.