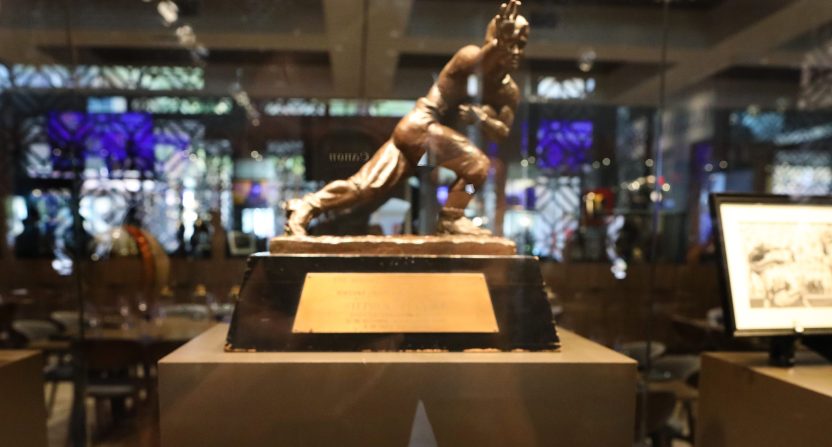 The 2022 Heisman Trophy ceremony is set to take place on Saturday, December 10,  and we now know who the four finalists for college football’s most prestigious individual award are.

The four finalists for the Heisman Trophy:

Notably, all four finalists for this year’s award are quarterbacks. So, six of the last seven winners will be quarterbacks. Former Alabama standout and current Philadelphia Eagles wide receiver Devonta Smith is the only non-quarterback to win in that stretch.

It is also notable that three of the four players up for this year’s award are on teams that made it into the College Football Playoff, with USC and Caleb Williams being the only exception.

While each of these players clearly has an argument for the award, some around the college football world believe that Michigan running back Blake Corum deserved to be a finalist.

Blake Corum should have been invited to NYC.

Caleb is going to win the award, but the invite still matters. https://t.co/yL1Bfxfl7d

Does anyone really believe Blake Corum isn’t one of the top four players in college football?

Injury killed his chances … he just might have won the thing if he was healthy. Hendon Hooker in the same boat.

I have come to the internet to be upset about Blake Corum not being named a Heisman finalist. I am just as surprised as you are.

Absurd that Blake Corum is not a #Heisman finalist…Getting hurt before the last regular season game should not take away from what was the highest rated by @PFF season by any college player . I know RB’s don’t get much Heisman love, but this was a clear miss #MichiganFootball pic.twitter.com/WSJE4flWr4

I think there are legitimate cases for both Hendon Hooker and Blake Corum. Either would have been a worthy pick. But both should be ahead of Stetson Bennett.

What a joke. Stetson Bennett is a great story. … but he’s not the first or second most deserving QB in his own conference. Give me an injured Hendon Hooker or Blake Corum in his spot. And while we’re at it, stop letting people vote before conference title games. https://t.co/j8ZiD7iTK2

Of the finalists chosen, it seems that Stetson Bennett may be the one that many believe should be replaced. Though, it’s worth mentioning that the vote is already in. So, Bennett is a “finalist” over Corrum because he received more votes.

And Bennett has a clear argument, leading the top team in the country to an undefeated record with some big wins in the top football conference in the country.

It has largely been believed that Caleb Williams may have locked up the Heisman Trophy following his amazing performance last month against Notre Dame.

Even after the loss to Utah, he remains the favorite. The odds after the finalists were revealed on Monday certainly reflect that, with Williams currently sitting as a -2500 favorite to win the award on BetMGM.