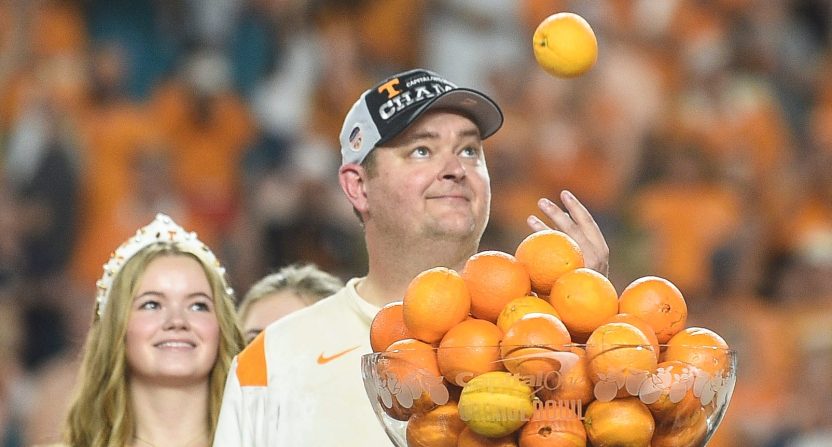 The Tennessee Volunteers are coming off its best season in years, earning its first 11-win football season in over two decades. The man at the center of that success, head coach Josh Heupel, is now being compensated for that success.

“The results over Josh’s first two seasons speak for themselves,” White said in a statement. “He and his staff have energized both our football program and our fanbase with an aggressive brand of football, a competitive culture that creates leaders and a relentless approach to raising the bar every single day. Despite a brief period of dormancy, Tennessee never surrendered its status as a college football powerhouse. We just needed an innovative leader like Josh Heupel to reignite the spark. It’s been fun to crash the party, but as Josh said after our Orange Bowl triumph, the best is yet to come.”

In two seasons as head coach, Heupel is 18-8, which includes seven wins over the program’s first New Year’s Six berth in the College Football Playoff era and a No. 6 final ranking this season.

“I am grateful to President Boyd, Chancellor Plowman, Danny White, and of Vol Nation for their tremendous support,” Heupel said. “Our staff takes great pride in representing the Power T, and it’s something we never take for granted. We will continue to work tirelessly to build a championship program that all of Vol Nation and all VFLs can be proud of.

“Most importantly, our players are the people who deserve all of the credit for our resurgence on Rocky Top. Over the last two years, they believed in us and poured their energy into every single day with hard work, leadership, cohesiveness and consistent habits. I am proud to be their coach.”

The college football world wasn’t too surprised by the news, given the interest that every other major program is going to have for Heupel if he keeps this up.

UT announces extension and raise for Josh Heupel, jumps to $9 million a year. What he’s done in two seasons meant he couldn’t stay in the 10-11 range in SEC pay.

A Top 10 finish results in a Top 10 contract! Fitting extension after an incredible year on Rocky Top. https://t.co/oVgnS9eUW9