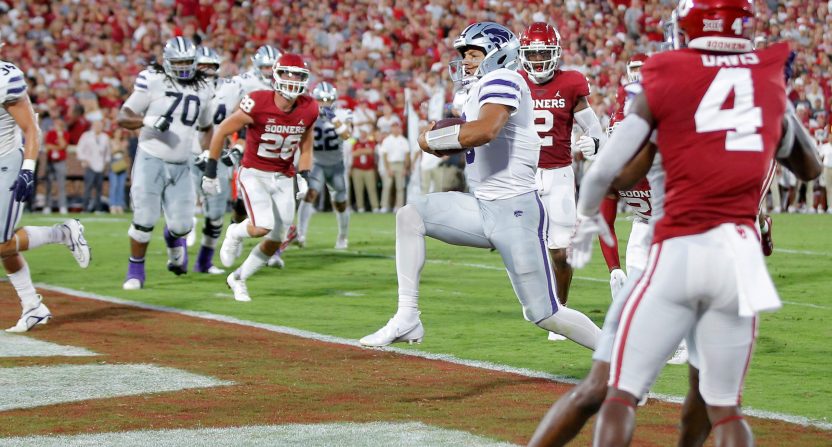 If you’re associated with the Oklahoma football program in any way, there’s probably no scarier sight on the planet than looking across the field and seeing Kansas State on the opposite sideline. The Wildcats upset highly-ranked Sooners teams in 2003, 2012, 2019, and 2020. After Saturday’s game, we can add one more to that list.

Kansas State started strong, taking a 14-0 lead over No. 6 Oklahoma. The Sooners quelled that early surge, though; early in the second quarter, the game was tied 14-14. So, it appeared as though Oklahoma had regained control. Those appearances were incorrect.

The Wildcats quickly regained the lead and were up 24-17 at halftime and 27-20 after three quarters. Kansas State quarterback Adrian Martinez scored on a 15-yard run to give Kansas State a 34-20 lead in the third quarter, but Oklahoma answered. With the Wildcats facing a third-and-16, the Sooners were well positioned to get the ball back, trailing only by a touchdown and with plenty of time remaining. Only, Martinez had other ideas.

He not only scrambled to pick up the first down but went 55 yards. Two plays later, he applied the final dagger to the Sooners, scoring his fourth rushing touchdown of the day.

Kansas State has a great chance to put away No. 6 Oklahoma. 🏈 pic.twitter.com/y5OgDYmwJ1

Adrian Martinez caps off the drive with a touchdown run!

41-27 Kansas State over No. 6 Oklahoma with under 2 minutes remaining. 🏈 pic.twitter.com/nY6Onm3Sgy

For many college football fans, Saturday’s upset felt like moviegoers when they see a remake. Sure, the names and faces change. In the end, though, Kansas State knocking off Oklahoma was a familiar result.

Oklahoma whenever they see Kansas State on the schedule: pic.twitter.com/oQMbaJJHi5

Since 2012, Oklahoma has lost only 9 home games – 4 of those were to Kansas State

Oklahoma is leaving the Big 12 so it doesn’t have to play Kansas State again.

Kansas State is the only team over the last 30 seasons with a winning road record against Oklahoma (min. 2 games).

The Wildcats moved to 6-5 in Norman over that span with their win tonight. pic.twitter.com/YTRFEikADA

Oklahoma was the third different ranked team to fall to an unranked opponent on Saturday. Earlier in the day, Middle Tennessee State beat Miami and Texas Tech upended Texas. If misery loves company, the Sooners can take some comfort knowing that they are not alone.