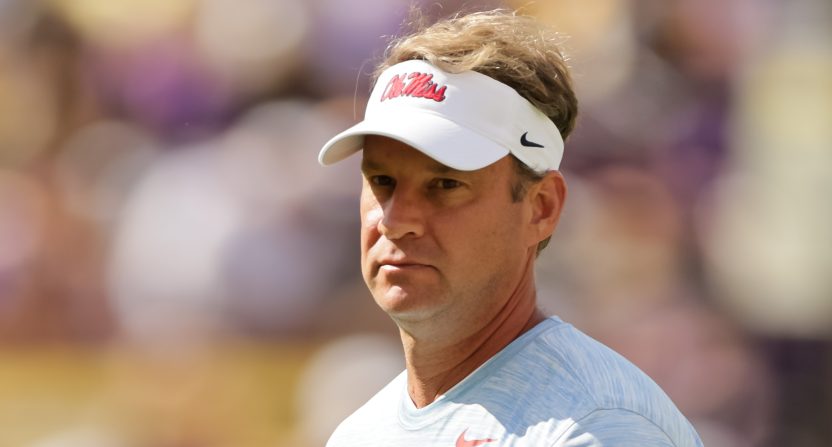 A shocking report emerged on Monday suggesting that Ole Miss Rebels head coach Lane Kiffin was expected to resign from the program and become the next head coach of the Auburn Tigers.

BREAKING: #OleMiss HC Lane Kiffin plans to step down as the Rebels coach Friday and head to Auburn to become the Tigers next head coach, according to sources

Sources say the Tigers haven’t officially offered the job to anyone yet.

So Lane to Auburn is happening. Story soon.

Kiffin has taken notice of this report, and he denied it on social media shortly after it emerged.

“That’s news to me Jon. Nice sources,” Kiffin tweeted in response to the rumor.

He then went on to troll Sokoloff for his report, making his own “report” about him stepping down from his news position and taking a position at another network.

While he did deny the report, it seems that many around the college football world still are not sold that Kiffin will remain at Ole Miss.

anddddd this week is gonna be a long one https://t.co/Z8wbAReL4P

This is a flat-out public denial. Whether it turns out to be true or not likely depends on the number of 0s. https://t.co/HsBVZ6fGzF

Lane Kiffin denying a report tonight that he's leaving Ole Miss for the Auburn job. We shall see. https://t.co/apo7cPv34Q

whew things are getting *interesting* https://t.co/ADUyzsYwAQ

A lovely bit of business to start your Egg Bowl Week.

Only in college sports right? https://t.co/z3kRHjPpls

Ole Miss is set to take on in-state rival Mississippi State this weekend in the annual Egg Bowl, so it certainly would have been a strange time to resign as head coach.

At this point in time, Ole Miss is actually a far more stable football program than Auburn has been in recent years.

The Rebels has had at least eight wins in each of the last two seasons, while Auburn could be heading toward their second consecutive losing record if they’re unable to beat Alabama this year.

Regardless, the vacant Auburn job presents an extremely high-profile platform for Kiffin to potentially revive a once prominent football program.

While Kiffin may eventually take the Auburn position, it seems like his sole focus is on the team’s upcoming matchup this weekend for the time being.