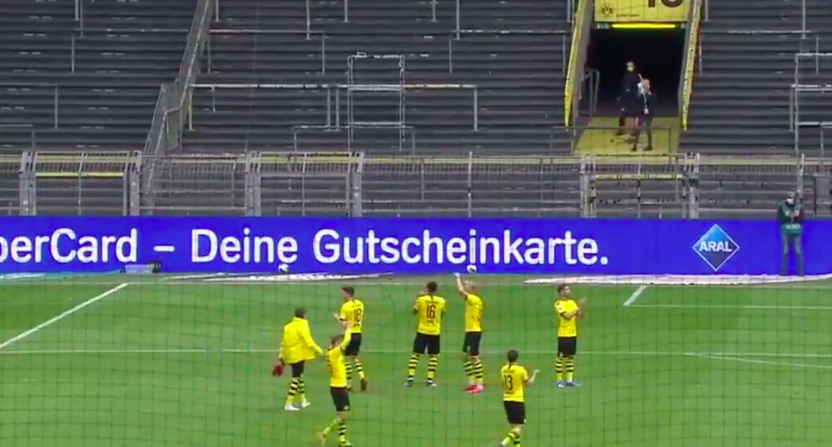 If you wanted to get a good sense of what it might be like this fall if American sports return to empty stadiums without fans present, you’ll want to see (and hear) how things went for the German Bundesliga when it restarted play on Saturday, the first major European sporting event to restart during the Covid-19 pandemic.

Even though Germany currently has over 74,000 confirmed cases of Covid-19 and over 7,800 related deaths, the soccer league is hoping that strict safety protocols, which include no fans, minimal coaching staffs, and goal celebrations in which players must maintain social distance, will prove that pro sports leagues can compete while managing the risks involved.

Given what we know about soccer fans in Europe, to see a match happen without any of them there cheering, singing, booing, and generally making lots of noise, is something that takes a little getting used to.

The Yellow Wall is with them in spirit 🖤💛

YNWA plays out at Signal Iduna Park with images of the fans displayed around the stadium…#BundesligaIsBack pic.twitter.com/Ms1Qlx8ue0

No fans allowed at Bundesliga in Germany. They should have the player’s mothers sit in folding chairs along the sideline so they can yell at the refs. That’s the most authentic version of the game I know. pic.twitter.com/QRt8vxaPWj

As a way to install some semblance of normalcy, some of the seats in certain stadiums were outfitted with fake fan cutouts. Again, super-weird. The move is meant to give both players and TV viewers something in their line of sight that seems somewhat expected, but it’s pretty hard not to know you’re looking at fake fans, much like when you look at a crowd in a football video game.

While Borussia Monchengladbach are playing away at 17:30 BST, their home stadium is ready with cut-outs of their fans, thanks to this brilliant idea back in April 👏

While it’s fairly impossible to play soccer without coming into contact with your teammates and opponents, the league is taking some steps to keep things safe-ish. They disinfected match-balls during breaks in play, substitutes were made to sit socially distant from one another, and

Dortmund substitutes sitting apart on the bench and with face coverings on. pic.twitter.com/eSVkLWdHPC

We really saw just how different things were going to be during the Dortmund-Schalke when Dortmund’s Erling Haaland scored, followed by piped-in fan celebrations and singings while the players celebrated from socially distant spaces on the pitch.

The Bundesliga without fans is….well, this will take some getting used to. Goal celebration music and socially distanced celebrating in an echoing warehouse? pic.twitter.com/I0lYMgs5Nt

In perhaps the purest and most surreal moment of the day, Dortmund players followed their 4-0 win by applauding the “Yellow Wall,” where 25,000 Dortmund fans would normally be sitting and cheering for them, but was now an empty area where fake cheering was being piped in.

For many, it might not feel like the authentic experience they’re used to (and took for granted), but for many others, any sports is better than no sports. And perhaps, like many things these days, it’s just something we’ll learn to get used to, or at least happily deal with for some sense of normalcy.

And just in case you thought the lack of people in the stadium might mean we’re going to miss out on memes and the quirky moments that make up sporting events, the Leipzig-Freiberg match reminded that life always finds a way…

There is nobody in stadium, yet the one dude who is, gets smacked by ball in the head while not looking 🤷🏼‍♂️. pic.twitter.com/ZliX4W4GLG