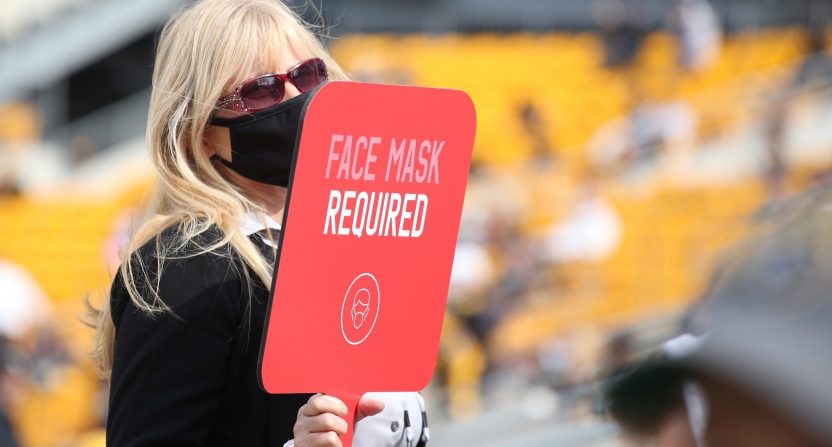 Perhaps not a worst-case scenario, but the impact of COVID-19 on this weekend’s college football schedule could probably be described as the most likely scenario that we probably should have seen coming.

Early Saturday morning, we learned that today’s scheduled contest between the Clemson Tigers and Florida State Seminoles was being postponed following a late positive test involving a Clemson player. The postponement of the game not only left TV networks scrambling to fill the open slot, but it added one more college football game to the ever-growing pile of canceled or postponed games scheduled for Saturday.

In fact, this was now the 18th scheduled game that wasn’t happening on the day, which means almost 30% of the games meant to be played today won’t happen. We almost added another one in East Carolina-Temple following a positive test involving a player’s girlfriend, but that game was merely pushed back instead of postponed.

Temple player, whose girlfriend had positive COVID test & delayed kickoff, tested positive, so unknown number of Temple players will be out because of contact tracing, source told @Stadium. However, game still will be played with a 12:50 p.m. ET kickoff

Regardless, it’s impossible to ignore the trends. This week’s number of canceled games is up from 15 games the previous week and 10 games the week before that. This trend not only isn’t slowing down, but it’s also intensifying in a way that makes you question how much it’s worth it to continue down this path. It’s not unthinkable to imagine that half of next week’s college football slate doesn’t happen because of positive test results.

This is usually the part where someone points out that players aren’t dying and they’re in peak physical condition, but that’s not the point. Given what we don’t know about COVID and it’s long-term effects, not to mention the way it can be transmitted from healthy people to immunocompromised people so easily, purposefully putting unpaid college football players in harm’s way in order to sell some advertising and sponsorships just feels like late-stage capitalism at it’s finest.

Even if you don’t agree with canceling the season, the fact that universities are spending gobs of money to prepare for games and travel across the country, only to find out that they can’t play the game and have to eat the costs, can’t make a lot of sense for the bottom line.

This isn’t an issue that’s just affecting certain parts of the country or specific conferences either. There are games canceled in each of the major conferences this weekend and that’s not likely to change as national infection and death trends continue spiking all over. There’s a sense that we just have to push through the best we can in order to make it to the College Football Playoff, and then it’ll all be worth it. But will it? Does that really matter that much at this point?

We’ll find out in the coming weeks because this trend isn’t going anywhere, and neither does college football.