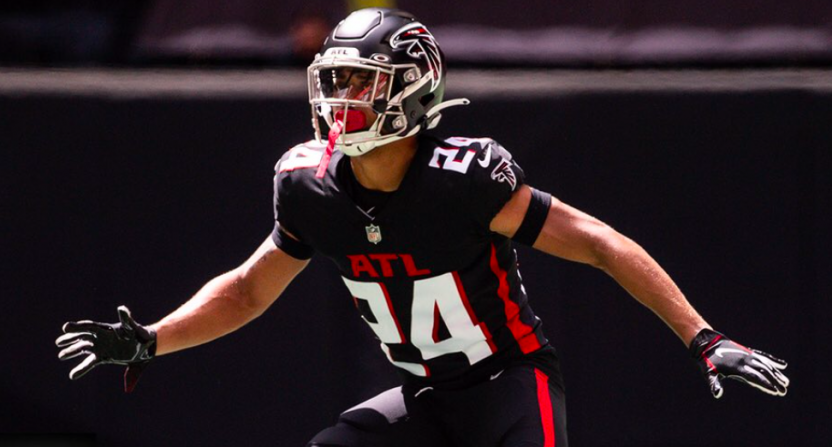 On Saturday, the Atlanta Falcons announced that they were putting cornerback A.J. Terrell on the reserved/COVID-19 list. That means he’ll miss Sunday’s game against the Chicago Bears and makes him the first NFL player to officially miss a game due to COVID.

We have placed CB AJ Terrell on the reserve/COVID-19 list.

Edmond Robinson has been elevated to the active roster as a COVID replacement.

We have also elevated Tyler Hall and Delrick Abrams to the 53-man roster.

Now it’s important to note that just because Terrell is on the list that doesn’t necessarily mean he has tested positive for COVID-19. He may have simply come into contact with someone who tested positive or is infected.

This new reserve list category was created for a player who either tests positive for COVID-19 or who has been quarantined after having been in close contact with an infected person or persons. If a player falls into either of these categories, their club is required to immediately place the player on the reserve/COVID-19 list. Per agreed upon NFL-NFLPA policy, clubs are not permitted to comment on player’s medical status other than referring to roster status. Clubs may not disclose whether player is in quarantine or is positive for COVID-19.

The Falcons are not under any rules to confirm if Terrell has tested positive himself and it’s unclear how soon he can be removed from the list in order to play again, so there’s still a lot of grey area involved here (which is definitely what you want when dealing with a virus…).

According to Adam Schefter, the Falcons found out about Terrell on Saturday based on a test taken Friday.  He also noted that no other Falcons have tested positive as a result.

Falcons got the news about CB A.J. Terrell's test today; it was from a test he took Friday morning. Terrell practiced Friday. Now immediate contact tracing goes into effect, per league protocols, but the Falcons have not gotten any other positive test results. https://t.co/0mqy9dNLUG

Terrell was drafted by the Falcons with the 16th overall pick in the 2020 NFL Draft and was a starter in both of Atlanta’s first two games this season.

The Bears will have their eyes set on exploiting Atlanta’s secondary on Sunday. The team will also be without starting safety Ricardo Allen, who is injured with a hyperextended elbow, and projected starting cornerback Kendall Sheffield, who is still recovering from a foot injury. It also won’t help if star wide receiver Julio Jones isn’t able to play as he’s listed questionable due to a hamstring strain.