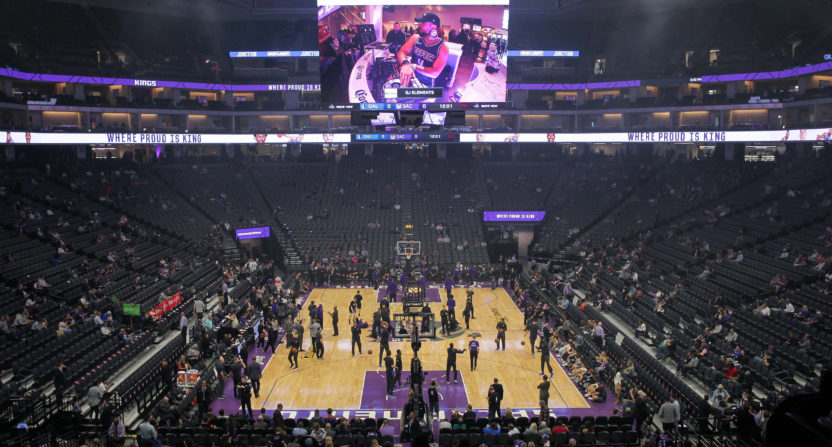 As hospital facilities are stretched thin, people have had to be creative in treating people who require medical attention during this pandemic. Because there are no sports going on, various sports facilities across the world have been converted into makeshift field hospitals in order to treat people and/or become a testing site for COVID-19.

Nearly a month ago, it was revealed that the now vacated Sleep Train Arena in Sacramento was going to be converted into a 360-bed field hospital. Soon after that, the Sacramento Kings announced they were converting their former practice facility next door into a makeshift field hospital. The Kings also donated $250,000 to local food banks and 100,000 surgical masks, after they had already donated 5,000 pounds of food. The Kings helped out the community in a time of need and got some positive PR. Now it’s been revealed that the Kings’ “donation” might not have been a donation.

In an investigation by the Sacramento Bee, they revealed that a contract was made between the state of California and the Kings where the NBA team would be paid $500,000 per month plus utilities in order to use the arena for three months. Reporters Ryan Sabalow and Dale Kasler filed a request under the California Public Records Act in order to obtain a copy of the contract. In total, the Kings would be paid “up to $3 million” in taxpayer money for three months of using the facility.

The part about the money wasn’t mentioned when Governor Gavin Newsom and the Kings announced this plan. Newsom noted that Kings owner Vivek Ranadivé offered up his facility “before we even asked” and praised Ranadivé saying that he was “very very grateful to [Ranadivé].” Ranadivé praised Newsom and claimed that “the city has always been there for us, and we will be there for the city in any small way that we can.”

A spokesperson for California’s Office of Emergency Services Brian Ferguson did and explained that the agreement was “consistent with what’s being done at the other sites” and not only are they paying a “consistent rate at all the alternative [hospital] sites,” the practice facility beside Sleep Train Arena is being offered “at no charge.”

The Kings echoed a similar statement as a spokesperson said their lease agreement with the state is “consistent with other similar alternate care facilities that have been created to support the growing medical needs of the COVID-19 crisis across California.” The spokesperson also noted that the Kings wanted to “use our platform for good and to help support our community.”

The Kings deserve some credit in offering up their facilities because people are sick and do need these places. The issue is having either a lack of transparency or just hiding the fact the Kings were paid, it feels like somebody hid something from the public. If the Kings were just paid a standard rate, and no one made it look like it was going above and beyond a general act of kindness, this might not be that big of a deal. But when the governor did song a dance about how generous the team was and the owner talked about wanting to make a difference in his community, no one can blame anybody for feeling like they were lied to and were led to believe this was a donation out of the kindness of the Kings’ heart.

Even if their practice facility is being offered “at no charge,” the Kings are still making out on a situation directly directed to a worldwide pandemic. And considering this was a team who received $255 million from the city of Sacramento to build the Golden 1 Center, it seems like the Kings have already received a lot of money from their government officials that they could’ve shown their appreciation by saving the state a few million for this. That would be the least they could do.