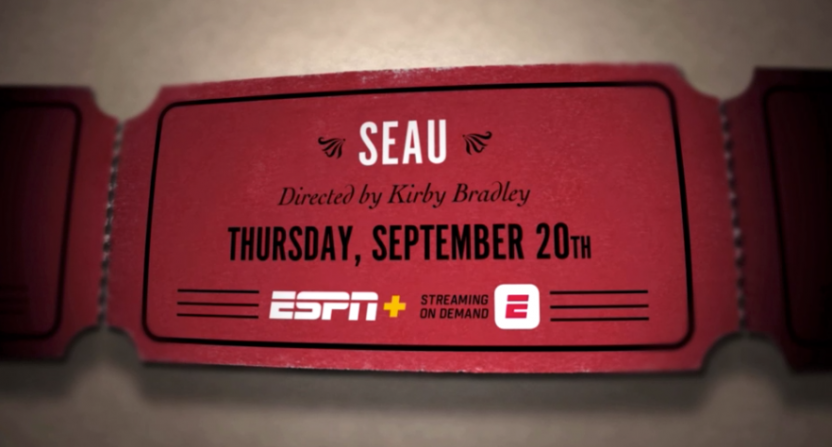 The long–anticipated next round of 30 for 30 documentaries from ESPN Films have been announced, and that also provides a look at ESPN’s new strategy on deploying these films across their growing array of services and mediums.

The big news is the announcement of “Seau,” a documentary from Kirby Bradley (“Real Sports with Bryant Gumbel”) about the life and death of Hall of Fame linebacker Junior Seau who committed suicide in 2012 after suffering from chronic traumatic encephalopathy (CTE). Unlike most previous 30 for 30 films on this level, “Seau” will debut exclusively on Thursday, Sept. 20, on ESPN+, the company’s multi-sport, direct-to-consumer subscription streaming service (which uses  access to the whole 30 for 30 library as a key selling point). It’s the second standalone 30 for 30 to debut on ESPN+, following April’s “The Last Days of Knight“; the six-part ESPN Films series “Enhanced” is also exclusively on ESPN+, but that’s a little different. No word on when or if “Seau” will debut on an ESPN TV network. Here’s a look at “Seau”:

The aforementioned “The Last Days of Knight,” which appeared on ESPN+ in April, will make its television debut on ESPN on Thursday, Nov. 29. It details the previously untold, behind-the-scenes story of CNN’s investigation into why high school All-Americans were leaving the Indiana University men’s basketball program under Coach Bob Knight, and the fallout that ensued after the story broke. Read our review of the film here.

Between “Seau” premiering on ESPN+ and “The Last Days of Knight” originally premiering there, it seems as though we’re getting a clear sense of strategy for the 30 for 30 docs. Those that ESPN deems to have a bit more interest or that could drive people to seek them out rather than wait will premiere on ESPN+, which the company is strongly attempting to position for big things. There’s only so much live content that they’re able to push to the subscription service without damaging their cable networks and online platforms, but scripted and documentary films like these are a perfect way to add value (and perhaps new subscribers) to their offering. And some of these may eventually make their way to TV as well, as we’ve now seen with “The Last Days of Knight.”

But that doesn’t mean that all new 30 for 30 episodes will premiere on the streaming service. On Tuesday, Dec. 11, at 9 p.m. ET, the documentary “42 to 1,” which chronicles Buster Douglas’ shocking knockout of the then-undefeated Mike Tyson in 1990, will premiere on ESPN. Co-directed by Ben Houser and Jeremy Schaap, the film will show how Douglas pulled off a victory that changed the course of sports history, even if he never quite lived up to the hype that followed. The title refers to the odds against Douglas at the time of the fight.

A yet-to-be-named, feature-length 30 for 30 documentary about “an unbelievably eventful few days in the life of Deion Sanders”  (which Sanders himself previously revealed) will premiere on ESPN on Thursday, January 31, at 9 p.m. ET. The film, produced by NFL Films and directed by Ken Rodgers (“The Two Bills,” “Four Falls of Buffalo”), will chronicle the 24 hours in October of 1992, when Sanders played in a pro football game between a pair of postseason baseball games in two different cities, all located one thousand miles apart.

ESPN also announced what’s to come in the 30 for 30 Shorts series and 30 for 30 Podcasts. The short “Sonic Break,” about Austrian daredevil Felix Baumgartner, will premiere Sunday, Sept. 23, at 3 p.m. ET on ESPN. The short film, directed by Stevan Riley (“Listen to Me Marlon”), will dig into Baumgartner’s state of mind before he jumped from a space capsule in the stratosphere 23 miles above the earth and traveled at a speed of 690 mph before parachuting safely to the ground (spoiler alert).“Sonic Break” will also be available for streaming on ESPN+ beginning October 14.

Meanwhile, the new season of  30 for 30 Podcasts drops on Tuesday, Oct. 16. The fourth season will include episodes about Jose Canseco’s book “Juiced,” Hideo Nomo and the arrival of Japanese baseball stars to the major leagues, the story behind the TV broadcast of the 2003 World Series of Poker, and a protest at the 1972 New York City Marathon.