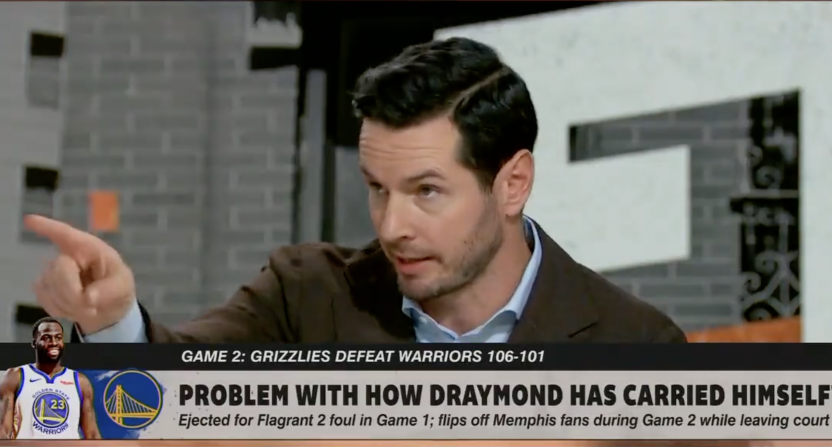 Wednesday’s edition of ESPN’s First Take saw a heated exchange when the crew discussed the topic of Draymond Green flipping the double bird at Memphis Grizzlies fans, as well as his post-game comments on the situation.

First Take regular Chris ‘Mad Dog’ Russo made his feeling about Green known by saying that Green should “shut up and play” and that “America is tired of Draymond Green.”

Redick took exception to Russo’s comments, blasting his co-host and comparing them to the anti-player speech rhetoric that we have seen in the past by the likes of Fox News host Laura Ingraham, who was publicly blasted in 2018 for saying NBA superstar LeBron James should “shut up and dribble.”

“This has the same kind of connotations that the shut up and dribble crowd has toward athletes,” said Redick. “I have a real problem with that. Specifically, with Draymond and the idea that America is tired of him, You do realize that the guy has a very popular podcast that he hosts where he talks himself for the majority of the episode and people listen to that.”

This was, according to Awful Announcing’s Jay Rigdon, a perfect example of how an on-air personality should handle comments clearly in the wrong.

The 17-year NBA veteran has certainly garnered the attention of many across the NBA world with his comments towards Russo, as well as previous commentary, with many commending him for coming to the aid of Green.

JJ Redick swished this one so good the net didn’t even move.

Somebody should also tell Chris Russo that the average age of a NBA fan is 42, so most folks watching the NBA have never seen Cousy, Wilt, or Bill Russell play. https://t.co/jGicItUbI9

JJ Redick bullying Chris Russo for an hour every day was not where I saw this all going but pic.twitter.com/AvUYFzOuSI

My brother @jj_redick had to straighten Mad Dog like a flat iron! God Bless America.

Redick has certainly come a long way since his playing days at Duke, where he was seen as one of the most unlikable players around during his college career.

JJ Redick went from being the single most hated player in an entire sport to the only person that can save us from Stephen A and Mad Dog. pic.twitter.com/hAmlwMrNcc

Do I like JJ Redick now? Who have I become? https://t.co/yVtlpf9Rvs

JJ Redick going from one of the most hated college basketball players of the past 20 years to beloved NBA role player and now beloved NBA commentator is one of the wildest face turns imaginable.

ESPN certainly made a smart move in bringing Redick on after his NBA career ended after the 2020-21 season.

It’s a very unique character arc that Redick has made throughout his basketball career, but he may now be the most likable person that ESPN has at the moment when it comes to their NBA coverage, which is pretty wild.