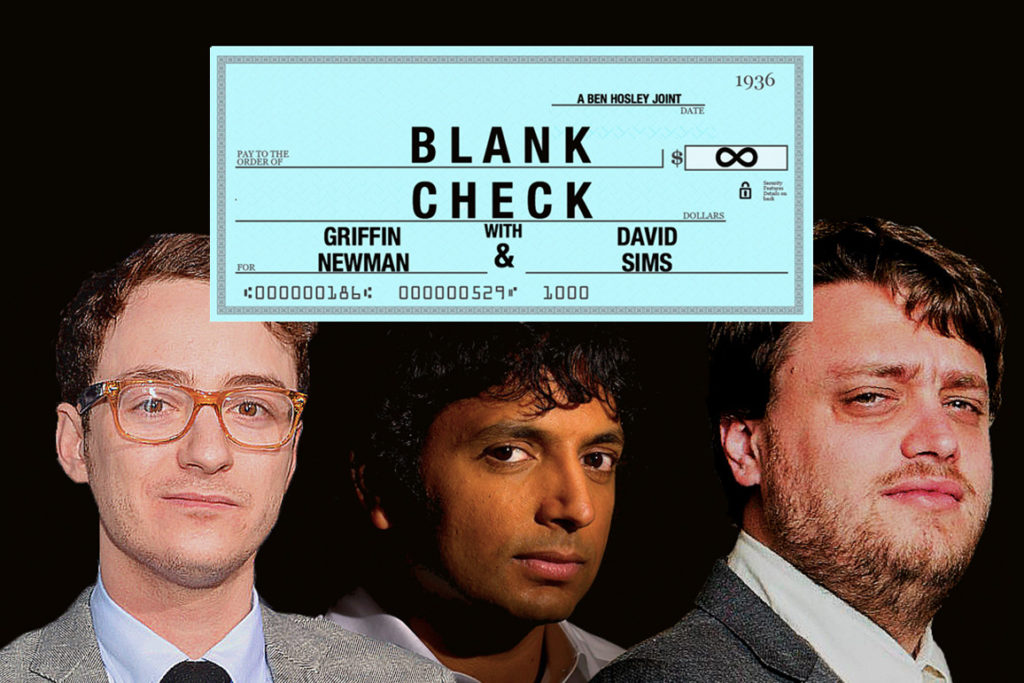 What Is It?: A podcast where a couple of dudes talk about movies. Wait, where are you going?

I know, I know. Lord knows the podcasting world has enough of those. Wisely, Blank Check isn’t just the base notion described above. They chose a specific angle that gives them a unique spin on the genre.

The podcast actually started as an in-depth (way too in-depth at times) discussion of the Star Wars prequels. When they had drained every last drop possible from that premise, the show shifted into what it is now. With some exceptions, the podcast is broken up into a collection of mini-series in which they explore the films of directors who were given a “blank check” to make whatever they wanted.

Think M. Night Shyamalan after The Sixth Sense or Christopher Nolan after Batman Begins. As the hosts like to say on the podcast, sometimes those checks clear and sometimes they bounce, baby. Each episode is usually dedicated to one film from the director and a lively discussion about what worked or didn’t work. Hijinks, as they are wont to do, ensue.

Who Are The Hosts?: First up is David Sims, a movie critic and senior associate editor for The Atlantic. David is the straight man of the podcast, usually splitting his time between sharing his thoughts and shuffling Newman along before another tangent comes along to take the podcast off course.

Along with Sims is Griffin Newman, a comedian and actor who also happens to be in the midst of a breakout year as Arthur on Amazon’s The Tick. He’s also appeared in various movies and TV shows such as Draft Day, Political Animals, and Vinyl. Newman is the wild card of the duo, always ready to run with whatever thought comes to mind. He’s got the comedy chops and likability to make you want to take the journey with him, no matter what weird rabbit hole it leads you down.

If we’re comparing podcasts about movies hosted by dudes, Sims and Newman would be akin to Dan McCoy and Elliott Kalan of The Flop House.

There’s also Producer Ben, who chimes in from time to time with his own thoughts on the movie in question. Often, however, his presence is more vital so that Newman can run down his ever-expanding list of insidery nicknames for Ben (The Benducer, The Peeper, The Hos, Mr. Hositive, The Poet Laureate, and Kylo Ben, to name a few). Just don’t call him Professor Crispy.

What’s A Normal Episode Like?: While the show will do special episodes to review important (or important to them) films as they pop up, most episodes are part of a larger miniseries about a specific director who received a “blank check.” So, for example, the podcast did a miniseries about The Wachowskis. Each episode of that miniseries took on a specific movie made by the directing duo, starting with their first feature (Bound), through the Matrix movies and beyond, before ending with a special bonus episode about The Animatrix.

The overarching goal is to track their trajectory as filmmakers and storytellers and, in that way, answer the question of what getting that “blank check” did to these filmmakers. Was the effect good, bad, or something else?

Every episode begins with Griffin doing some purposefully awful pun work around a quote or scene in the film in question, which then leads into a humorous discussion between the two and possibly a guest. They discuss the plot of the film, what might have been happening during production, how the film performed at the box office, and what else was going on in the film world at that time.

Our next mini-series will cover Kathryn Bigelow's filmography – watch along with us!?️ pic.twitter.com/pn2JPJrGo0

Who Is It For?: Movie nerds who have themselves spent way too much time obsessing over specific directors. The kind of people who stood in line for the opening night of The Matrix: Reloaded or Interstellar. The kind of person who would get a Cube 2: Hypercube reference. Fans of The Flop House, How Did This Get Made, or We Hate Movies who are looking for another aural fix.

Who Is It Not For?: People who don’t know or care about the stories behind movies. People who don’t particularly know which director made what or track their careers in any particular way. Colin Trevorrow probably doesn’t want to listen, given how he seems to pop up often as a personal punching bag of Griffin’s.

How Many Episodes Are There?: There are 128 episodes to date, though many of those comprise the previous Star Wars version of the show. Under the current format, they’ve done miniseries on Shyamalan, The Wachowskis, Cameron Crowe, James Cameron, Steven Spielberg, Christopher Nolan, and Kathryn Bigelow.

Any Special Guests?: More often than not, each episode includes a special guest. It’s often a comedian, film critic, or friend of the podcast who might have specifically requested to talk about the film in question or might have been thrown into the lion’s den without realizing what they were getting into. Names you might know include Vanity Fair‘s Katey Rich, IndieWire’s David Ehrlich, and comedian Seaton Smith.

Can I Jump Right In?: You can, but it probably makes more sense to at least start at the beginning of a specific miniseries. The show often makes reference to other movies they’ve discussed in previous episodes, so you might get left in the dark if you haven’t listened. Not to mention that it’s a show with a deep roster of inside jokes and references, so the further out you start, the less you’ll understand.

As you might assume, episodes revolving around bad movies can often lead to the most fun. The episode about Lady in the Water, the infamous M. Night Shyamalan flop, is a particular standout. Much fun is had at the ridiculous plot, Shymalan’s ego-tastic decision to cast himself as the writer who influences the future of the world, and tangents about what the hell happened to the director once he found success.

Another Shyamalan disaster, The Last Airbender episode features comedian Seaton Smith, who might be the top recurring guest in terms of comedy wattage.

The Book of Henry is one of those standalone episodes but its notable because of Griffin’s longstanding disdain for director Colin Trevverow (the guy who just got booted from Star Wars IX). This movie might have been a big part of the reason why and the episode ends up being a schadenfreude-fest for the hosts and audience.

So, Should I Listen To This?: If you’re already a fan of fun movie podcasts, there’s no reason not to include this one in your collection. It takes a different tack than other popular shows but brings a steady stream of humor, off-the-cuff nonsense, and interesting information that even hardcore movie buffs can appreciate.