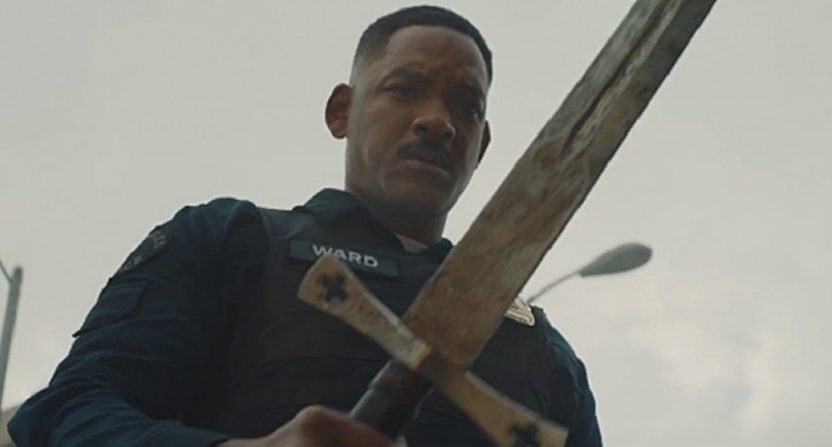 Only a few weeks ago, Netflix’s big-budget film Bright hit the streaming service with lots of big hopes but ran right into a tsunami of scorching reviews.

Indiewire’s David Ehrlich said, “there’s boring, there’s bad, and then there’s Bright, a movie so profoundly awful that Republicans will probably try to pass it into law over Christmas break.” Vanity Fair’s Jordan Hoffman added that Bright “is a dreadful bore as a narrative and, even more aggravating, a visual non-event.” The Wrap’s Todd Gilchrist noted, “there may be no more unexpected (or damning) faint praise for David Ayer’s new movie Bright than this: It made me wish I was watching Suicide Squad instead.”

I wasn’t much kinder when I reviewed it for The Comeback. This big swing and a miss by the streaming service hoping to compete with Hollywood studios committed the deadly sin of being boring, which is shocking considering you can boil the logline down to “The world of Lord of the Rings but in the present day.”

“Watching Bright, you become acutely aware that the film is at once both excited and embarrassed by its own world-building. We’re given tantalizing imagery that gives us big ideas about the world of the film. We see a minotaur police officer helping round up a criminal. A dragon flies over the L.A. skyline at one point. We briefly visit the Elf District where they live a life of luxury and excess with a perceived disdain for the rest of us. And yet, all of those things are just moments in passing. You get to see that these things exist, but Bright doesn’t want to focus on them too much, lest you be distracted from the grimy plot of the movie. Whereas there’s an exciting and intriguing world to discover, this film would rather bog you down in less-interesting moments.”

Netflix greenlit a sequel before the film was released, but many wondered if those plans would be quietly scrapped, given the reaction. However, there was always the possibility that Netflix would announce that Bright was a massive hit, which for all we know it might be, considering how secretive they are about their audience numbers. Turns out, Netflix still must have liked what they saw because they made it official on Wednesday that Bright 2 was in the works.

Leaked footage of Orc casting confirms the rumors: there will be a sequel to #BrightMovie. pic.twitter.com/8ayiDYDfK5

Sure enough, Netflix claimed in a press release that Bright was the No. 1 movie on Netflix internationally and has become the “highest viewed Netflix film ever on the service in its first week of release and one of the biggest originals (including sequels/additional seasons) Netflix has ever launched.” Of course, Netflix also promoted Bright to the moon so it wouldn’t be too surprising to hear that audiences wanted to check out the Will Smith vehicle, good or bad.

Smith will return for the sequel, along with co-star Joel Edgerton and director David Ayer. Only screenwriter Max Landis, who spent the year leading up to the film’s release saying he hoped it would become his Star Wars (Iit will not) is not returning for the second go-around.

Despite how much Bright fumbled its can’t-miss premise the first time around, there’s plenty of hope that they’ll learn from their mistakes on the second one. Because we’re a collection of smart-asses who think we know better, here are some suggestions on how to take the potential of this universe and make it work.

Lean Into The World You’ve Created

Based on how both Suicide Squad and Bright turned out, David Ayer doesn’t seem to like science fiction and fantasy all that much. It’s a bit surprising he’s even returning for the sequel because he directed the first film as if he was embarassed to really acknowledge the world of the film. The first half of the movie was akin to the kind of cop dramas that Ayers is well-known for, whereas the second half of the film is basically one long shootout.

Meanwhile, we get glimpses of all the amazing creatures that populate the world around this. We briefly see a centaur cop. We see a sign that implies strange beasts (which we never see) are known to appear in the road unsuspectingly. We know elves are a major part of this world and have their own secluded districts. All of these visuals are arresting and intriguing, but the film treats them like distractions that need to be left behind to make room for the sixth shootout in a row.

In the sequel, dig into this fantastical world. Expand the scope so that you can tell a richer story. We don’t need Will Smith riding a dragon through Beverly Hills, but help us understand the figurative geography of Bright’s universe. Don’t just rehash the buddy cop trope, make it more of a Dirty Dozen campaign with every kind of creature on the team. You made a movie where magical beings are real, don’t be afraid of it. You can go make another cop movie in L.A. any time you want. Make a “LOTR, but for real” movie.

The opening credits of Bright establish an extremely clear understanding that this film is going to be a metaphor for racial tension. Clothing, street art, music, and slang normally associated with African-Americans and Latinos living in L.A. are all transferred to orcs, who then fill in that role accordingly. We see graffiti of orcs with raised fists, not unlike Tommie Smith and John Carlos. We see other images of L.A. cops beating orcs, not unlike the way they beat actual people in the L.A. riots. Instead of N.W.A.’s infamous “Fuck The Police,” we read “Curse The Police.” It’s a very ham-fisted and uncomfortable switcheroo to make (especially by a white screenwriter and white director). But at the time, you hope that it’s going to pay off.

It does not. The film drops its intentions to delve into the orc/black people metaphor almost immediately, thereby making the entire opening sequence pretty fucked up. And since the film doesn’t seem to want to acknowledge what it was doing there, it makes it even more uncomfortable when you think about who the rich, elitist elves are meant to stand in for. To top it all off, Will Smith’s “fairy lives don’t matter” line really lets you know how unconcerned the film is about dealing with the metaphors it has created.

It’s hard to trust Ayer to be able to make good on all of this in the sequel, so the best course of action is to just drop it entirely. Don’t try to make any of it a metaphor moving forward. Move away from the “orcsploitation” mentality of the first film and just keep things at a surface-level. Orcs are orcs, humans are humans, elves are elves. Don’t try to make it any more complicated than that because you’re probably not going to be able to do it deftly.

David Ayer and Will Smith have worked together on two films now and both times Smith has been decidedly un-Will Smith-y. Yes, he had plenty of quips and one-liners peppered throughout Suicide Squad and Bright, but both characters have carried a worn-down, hangdog mentality that robbed the actor of his best ability: being a really fun, likable guy.

Continuity be damned, let Will Smith be Will Smith in the sequel. Let’s recapture all of the reasons he’s the star of this multi-million franchise. Bring in a screenwriter who understands Smith’s penchant for balancing coolness with quippiness. Just because he’s older than he was when he made Men In Black and Independence Day that doesn’t mean he has to be worn down. And honestly, his career could use a kick in the pants to get back that rather than continuing down this road.

Put Smith’s Daryl Ward and Edgerton as Nick Jakoby in the middle of an epic quest, give them a collection of buddy creatures to hang out with, and give us the fun fantasy adventure that Suicide Squad should have been. Pull out all the magic you can muster and give Smith great chances to riff on it all. We know he can do it. Have fun with the material and let him have fun with the material.

And then we, the audience, can have fun with the world of Bright, because it’s supposed to be fun!