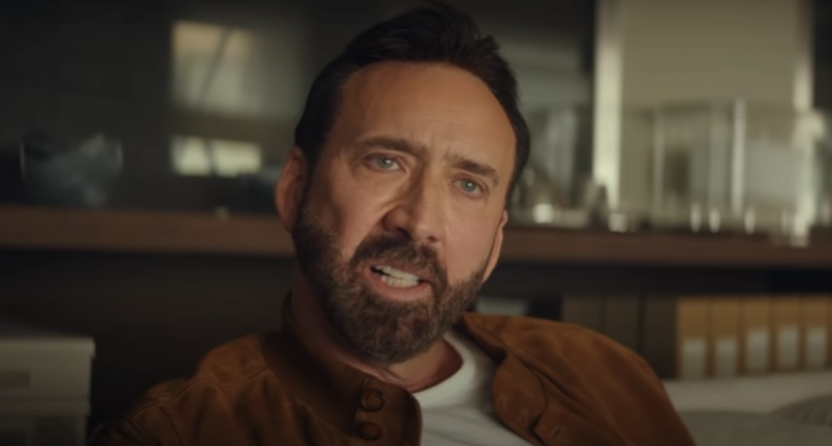 Many Hollywood stars sparkle and fade, burning out even quicker as the lifecycle seems to grow shorter by the year. The entertainment industry can be cruel Darwinism. But when it comes to evolution, few have survived fame quite like Nicolas Cage.

Cage is a movie star among movie stars. Perhaps no actor in the history of cinema boasts his combination of being eccentric, bizarre, charming, funny, brash, vulnerable, and (possibly) misunderstood. Cage is a lot of things to a lot of people, but you could never accuse him of being dull.

Only Cage could play the leading man in a spoof about himself. The Unbearable Weight of Massive Talent stars Nicolas Cage as “Nick Cage” in a movie produced by (you guessed it) Nicolas Cage. The only way this parody could be more meta is if Nicolas Cage wrote the screenplay. (He didn’t).

This was no vanity project. Cage told The Hollywood Reporter that he turned down the role “three or four times.” He only accepted after writer-director Tom Gormican persuaded Cage with a letter. Who could blame Cage for being reluctant? No matter how famous, rich, or successful you are, no one eagerly embraces self-mockery.

The stories about Cage are legendary.

Those are just a few of the tales that we know are true. You could spend an entire weekend going to an internet rabbit hole of tales that include exotic pets like snakes, ravens, and octopuses and his wild spending habits. While all of this makes for fun reading, Cage The Eccentric has overshadowed Cage The Actor.

The man is one of the most successful entertainers of his generation. Cage won an Academy Award for Best Actor and has appeared in over 80 films that have grossed $5 billion worldwide. He made us laugh in Raising Arizona. He romanced us in Moonstruck. He made us cry in Leaving Los Vegas. We went on wild adventures with him in Con Air, The Rock, Face/Off, and the National Treasure franchise.

Cage was cool. Then he started to make truly terrible movies (The Sorcerer’s Apprentice, Ghost Rider: Spirit of Vengeance, etc.). A lot of them. His excessive spending habits led to huge bills. There were reports that he squandered $150 million and owed the IRS $6.3 million in property taxes.

But Cage has mounted a comeback in recent years. Pig, a film in which he plays a recluse chef in search of a truffle pig, earned him Oscar buzz. His latest performance, though, takes his acting to another level. Cage is essentially playing an exaggerated version of himself in The Unbearable Weight of Massive Talent.

His “Nick Cage” character is self-absorbed and over the top. In one hilarious scene, we think Cage is speaking with his agent only to find out that it’s a therapy session with his daughter. This Cage also has an alter ego that he has conversations with. We won’t spoil it for you but it’s one of the characters from his previous movies.

Like the real Nicolas Cage, Nick Cage suddenly is down on his luck due to money problems. So he takes a $1 million offer to attend a rich man’s party. This is where the comedy/adventure begins. A simple appearance turns complicated fast, with Nick Cage summoning all of his acting skills to save himself.

The Unbearable Weight of Massive Talent features plenty of Easter eggs to satisfy the most hardcore of Cage fans. But what makes this so enjoyable is watching how much fun the real Cage is having.

This film could have easily fallen apart with the wrong tone. Cage strikes all the right notes by willing to poke fun at the image he has built over decades. It took a lot of guts for Cage to take on this role. You can buy a lot of credibility by mixing humor with humility.

That’s a lesson for all of us.