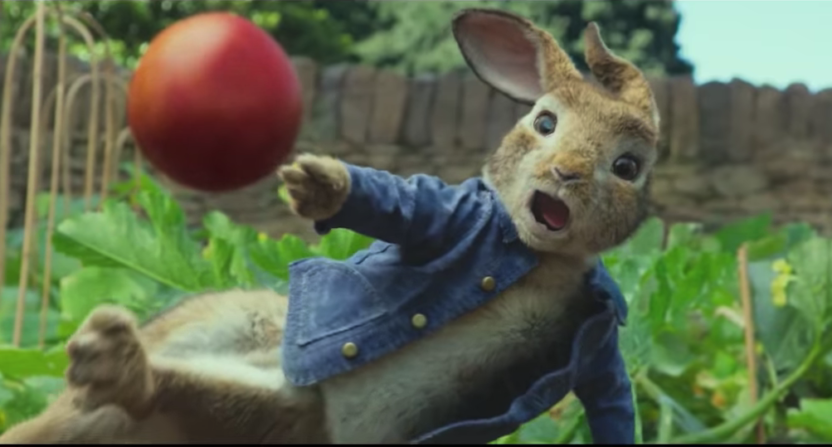 The new Peter Rabbit movie certainly made some interesting choices.

Perhaps the most well-known one is that the filmmakers decided to take the classic children’s character and turn him into “an insufferable dick,” according to The A.V. Club’s Jesse Hassenger. That may be part of the reason the film failed to surpass the latest Fifty Shades film this past weekend.

Word of mouth is a critical aspect to any movie’s success at the movie theater but the long-term prospects aren’t great for Peter now that some viewers are up in arms over a scene that depicts the titular rabbit bullying a character with an allergy to blackberries. In fact, the scene is so explicit in it’s intent that Peter and his friends pelt Mr. McGregor with berries to the point where he goes into anaphylactic shock and requires an epi pen. Good, old-fashioned family fun?

**Warning** For those who have children that live with food allergies (like mine), do NOT go see the new Peter Rabbit movie. Finding “humor” in bullying by Peter & friends to an allergy friend (who then needs an Epi) is sickening. Shame on @SonyPictures #BoycottPeterRabbit

The scene prompted backlash from allergy advocacy groups ike the Asthma and Allergy Foundation of America and Kids With Food Allergies Foundation, and parents of children with food allergies, who said the scene “mocked an attack that in real life could have proved fatal. The segment led to a hashtag— #boycottpeterrabbit—and an online petition demanding an apology.”

Perhaps not interested in the PR value of such a boycott, the filmmakers and Sony Pictures released an apology over the scene and the impact it could have on young viewers with similar allergies.

Sony Pictures says Sunday in a joint statement with the filmmakers that “food allergies and are a serious issue” and the film “should not have made light” of a character being allergic to blackberries “even in a cartoonish, slapstick way.”

The studio and filmmakers say that they, “Sincerely regret not being more aware and sensitive to this issue, and we truly apologize.”

Of course, there was an equal reaction to that initial reaction, wondering if the “wussification of America” wasn’t the real enemy here.

So people are calling for a boycott of the Peter Rabbit movie because of food allergy bullying???? Give me a break! Society, get over yourself. As time goes on, skin grows thinner. People like this need to get a life, seriously. This is absurd.

We’re going to guess, however, that the people on that side of the issue don’t have food allergies or children suffering from them and haven’t ever witnessed what happens when things go wrong. It’s certainly nothing to make light of in those scary moments. And any kid who has ever been bullied over their inability to eat a certain food will probably tell you that it’s not a situation that should be played for laughs either.

No word on whether or not Sony will include a warning of any kind before the film or remove it from future releases. As for whether or not you should avoid the film because of the scene, we’re thinking that the tepid reviews should probably make that decision for you anyway.