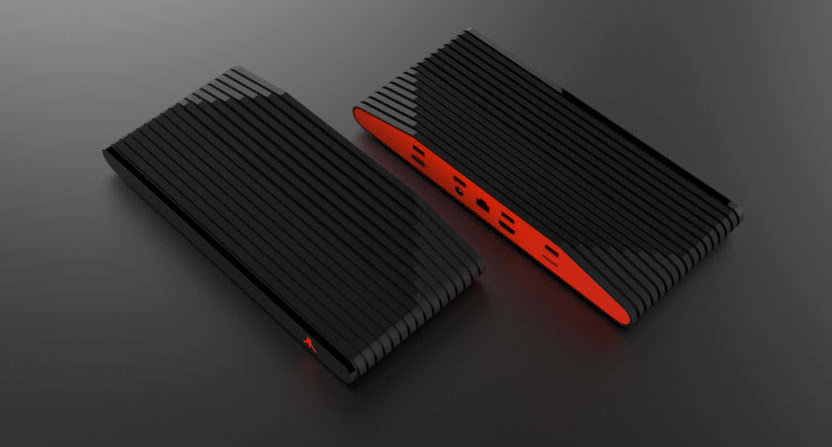 The company that took the largest responsibility for tanking an entire industry is once again hoping there is room in the market for a possible return. Rumors had been floating around recently that Atari was ready to return to the home console market, and today the company has unveiled their plans to release a new home console to the market.

Say hello to the Ataribox, a sleek-looking home console designed to allow gaming fans of all ages to re-live any number of classic Atari titles from the past as well as, perhaps, some more modern titles to come. For now, little is known about the actual specs of the Ataribox, but it certainly seems to be riding the nostalgia wave that has been fueled by the recent success of the NES Classic Edition and the upcoming release of the Super NES Classic. Atari announced the new Ataribox in a newsletter.

In the newsletter, Atari confirmed the plan is to release two different models of the system, and it will be ready to plug into your HDTV with the proper HDMI output in place and four USB drives (which are likely for controllers, or maybe even external storage).

Inspired by classic Atari design elements (such as the iconic use of wood, ribbed lines, and raised back); we are creating a smooth design, with ribs that flow seamlessly all around the body of the product, a front panel that can be either wood or glass, a front facing logo, indicator lights that glow through the material, and an array of new ports (HDMI, 4xUSB, SD). We intend to release two editions: a wood edition, and a black/red edition.

A fact that needed to be cleared up after the release of the newsletter was this project is expected to be a crowdfunded device. Rather than fight for retail space once again, Atari could benefit by delivering its newest product directly to consumers, and that may be a wise way to go for a couple of reasons. First, the retail market is already dominated by Sony and Microsoft, and Nintendo is looking to push back to the big conversation with the growth of its latest home console. Atari no longer carries the same weight it used to, especially with a younger consumer base that has no real connection to Atari. This is purely a nostalgia item that will look to be gobbled up by Atari fans.

For the time being, there are still many questions about the Ataribox that will have to be addressed. Will any games come with the system? Will it come with a controller? Will you be able to add games to the device? How much is this thing going to cost (and how much would you be willing to invest in this)? Atari seems to be teasing this product with a plan on addressing the crowd funding effort down the line. Consider me among those who will be interested to see what Atari has planned for the Ataribox. I still have an Atari 2600 collecting dust in the basement, so if there is a way to play some Ms. Pac-Man on my TV with the Ataribox, I might be willing to put down a few bucks to support the cause.

Crowdfunded video game systems have had some bumps in the road so far, most notably the Ouya system that was designed to play Android games on a TV. Fortunately, Atari at least has some background and pedigree in this industry to rely on to guide the ship toward a successful product, even if they are to blame for the video game crash of the 1980s. I’ll choose to play the optimistic supporter here and hope for the best.

Atari’s most recent console was the Jaguar, a 64-bit system that predated the Nintendo 64 but struggled in a market dominated at the time by the Super NES and SEGA Genesis and was knocked out of the competition by superior 32-bit systems like the Sony PlayStation and SEGA Saturn. Atari remained in the game business but has not stepped foot back in the console market.