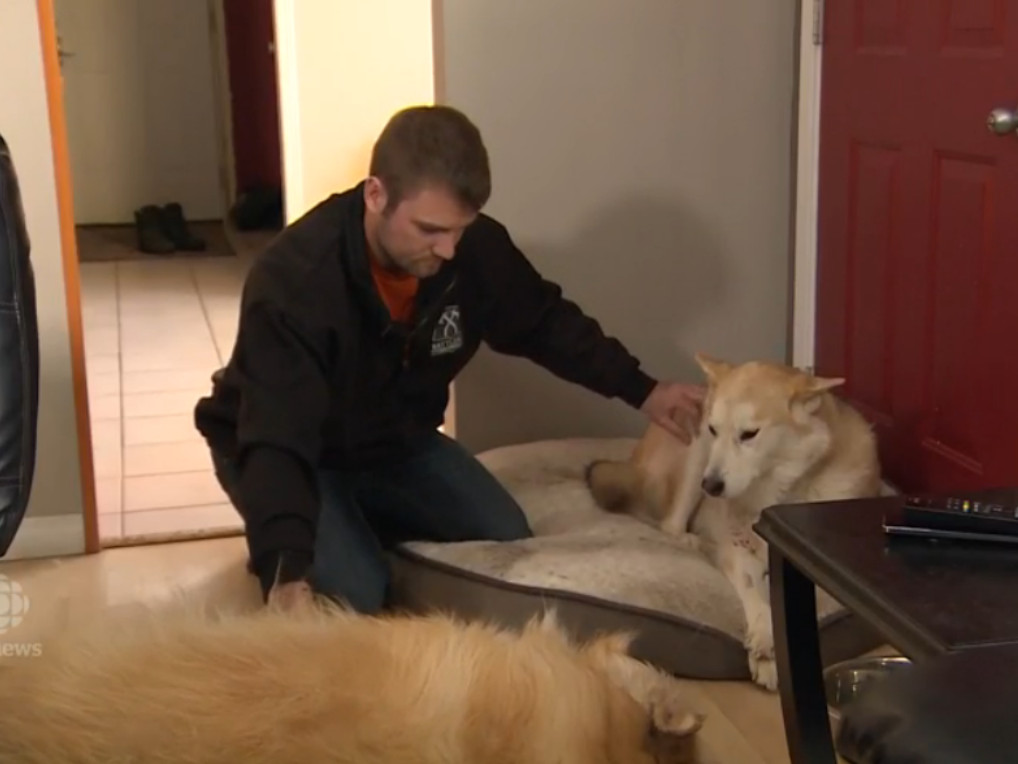 A dog’s love is unconditional, so it is always nice to see when that love is returned by the dog’s owner. Not even a cougar could stop one Canadian man from doing what his own dog would’ve done for him — stepping in when the other was in trouble.

Will Gibb, who lives in Red Deer, Alberta, was meeting his friend for coffee at a Tim Hortons on Dec. 26 with two of his huskies in tow. Before entering the restaurant, Gibb decided to let his dogs, Sasha and Mongo, out for a quick run around the parking lot.

However, just seconds after releasing the pair, Gibb heard Sasha yelp out in pain. As he ran to see what was wrong, he discovered a cougar had emerged from the nearby woods and pounced on Sasha.

When it came to protecting his beloved pet, Gibb did not hesitate. In fact, he barely had time to register what exactly had attacked Sasha, he just knew he had to do something.

“She (Sasha) was crying out in pain and distress so I went running,” said Gibb, a 31-year-old technician. “And I saw something wrapped around her so I ran up and punched it in the side of the head.

“At that point I realized it was a cougar.”

Here’s video of Gibb talking about the incident:

The cougar dashed off into the woods after the punch, but Gibbs and his dogs were not in the clear just yet. Sasha had been badly hurt with bite wounds on her neck, and claw marks on her belly and arms. As Gibbs went to tend to Sasha, the dog, undoubtedly scared and confused from the attack, bit her owner’s hand and held on as the Cougar reemerged from the woods.

With Sasha still holding his left hand, Gibb tried to fend off the cougar with his right. Eventually, Sasha let go and scampered off, but Gibb said the cougar then fixed its eyes on the other dog, Mongo. Not about to let his other dog be attacked, Gibb snatched up the closest stick and resumed his attack on the feline.

“I could see the cougar going for him, so I got between [Mongo] and the cougar and started swinging and screaming at it, and called for my brother and friend to come give a hand,” Gibb said. “And then I reached down for the closest, biggest stick that I could find and I ran back into the trees to go fight the cougar.”

This final assault scared the cougar back off into the woods for good, and Gibb, Mongo, and Sasha were soon all safely back in his truck.

Gibb also received some claw marks to his arm, but both he and Sasha are back home and doing fine.

The cougar was not so lucky. After locating the feline, and consulting with local fish and wildlife officials, police killed the animal. Officials said attacks like these are rare, but pet owners should always keep an eye out when they let their pets out near heavily wooded areas. It’s always worth being aware of wildlife, too; this story’s reminiscent of the Australian man who punched a kangaroo to save his dog.

Mongo and Sasha are both very good dogs, and it turns out they have a pretty good owner, too.