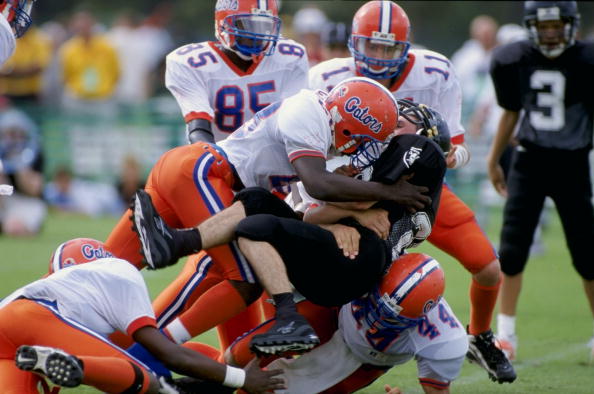 Awareness about the long-term effects of playing football continue to be on the rise, and some parents are responding by preventing their children from playing football. That sentiment is still far from the majority opinion though, according to a new poll from Reuters.

This poll data comes out shortly after a lawmaker in New York proposed a bill that would ban tackle football for kids younger than 14 years of age. Youth football has already been taking massive measures to make their leagues safer for kids, and changes have been implemented all the way up through the NCAA ranks. The NFL continues to battle this issue as well, although the top level of the game has lagged by comparison in addressing many health concerns about the sport.

The poll also showed there are some positive aspects of football that are still worth recognizing. 63 percent of those polled believed football teaches a strong work ethic and discipline, and 33 percent believe playing football has the ability to improve a kid’s chances of receiving a scholarship. This is accurate, with a number of football scholarships to be handed out to players good enough to attend an FBS or FCS program.

So, by default, playing football increases your chance to receive an athletic scholarship. How likely it is you may receive a scholarship is still a numbers game that may not be in your favor unless you truly are a standout athlete. Plus, given the risks of injury and head trauma, there might be a chance it hurts an ability to get a scholarship in other areas. So the percentages are tough to judge.

“The positive aspects of the bonding, having to overcome obstacles and instilling that ‘want’ to be better all far outweigh the violence,” said one poll responder, Christopher Rice of Chicago. “Besides, I do think those types of players who deliver violent hits are a minority in football.”

“Unlike in boxing where you can easily see a person’s eyes after getting hit, it’s not the same in football,” said Wayne Bourne Jr. of North Carolina. “In football you have a helmet on, some players have visors, and unless that person is lying on the ground you can’t really tell if they are concussed.”

This is not entirely true. Concussion protocols are found in the sport. Of course, properly following them can still be an alarming issue. And the lower the level of football you go, the more difficult it may be to provide that kind of medical attention from reputable trainers with this expertise.