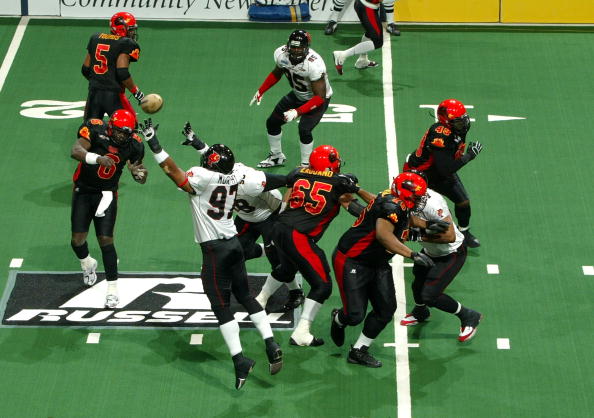 Remember the Arena Football League, with its fifty-yard field, skinny goalposts, crazy high-scoring and teams such as the LA Kiss? Well, it’s currently in the process of completely falling apart, and the future of the indoor football scene in the US is now highly uncertain.

First, one of the league’s longest serving teams, the Orlando Predators, folded earlier this week.

The team made the move, “due to the reduced number of teams remaining in the Arena Football League as well as pending disagreements with the League. Over the course of the past several years, we have focused on building and growing our winning franchise despite significant issues at the league level that have impaired our ability to be successful”, according to a statement on their website. They had just celebrated their 25th season of operations.

Then, one of the league’s newer teams, the Jacksonville Sharks, announced they were leaving the AFL for a rival league.

“It became quite obvious over the last couple of years we were going to eventually move to a rival league,” team owner Jeff Bouchy said. “Now was the right time to move the Sharks into an exciting new league that will become the premier league in arena/indoor football. Other teams from the AFL are expected to join us.”

Bouchy said teams like the Sharks who were more financially solvent had to pick up the tab for teams that weren’t so lucky, such as the ones in Chicago, San Jose, Portland, Las Vegas, and many others.

And the bad news has continued for the beleaguered outfit, with rumors that another long-standing team, the Arizona Rattlers, are looking to join the Indoor Football League. The same report also states that the LA Kiss and the Portland Steel have folded as well.

What’s left for the AFL are teams in Cleveland, Philadelphia, Tampa Bay and the new Washington Valor. Team owners held a conference call last night and the league issued a statement Friday morning stating the league, “is focused on solidifying its foundation for the long term and is in active conversations with strong, experienced ownership groups in markets where there is already a pro sports signature in place.”

“The addition of the Washington Valor this coming season provides a solid example of where we are headed,” the statement continued. “Ultimately, we continue to be focused on positioning and growing the league over the long term to deliver the great game, compelling broadcasts and arena experience our fans have come to expect.”
In order to find your football fix from April to August, fans may have to look beyond the Arena Football League and the indoor game in general to soothe their palettes before college and pro football boot up again.
[Orlando Sentinel/Jacksonville.com/KHQ]