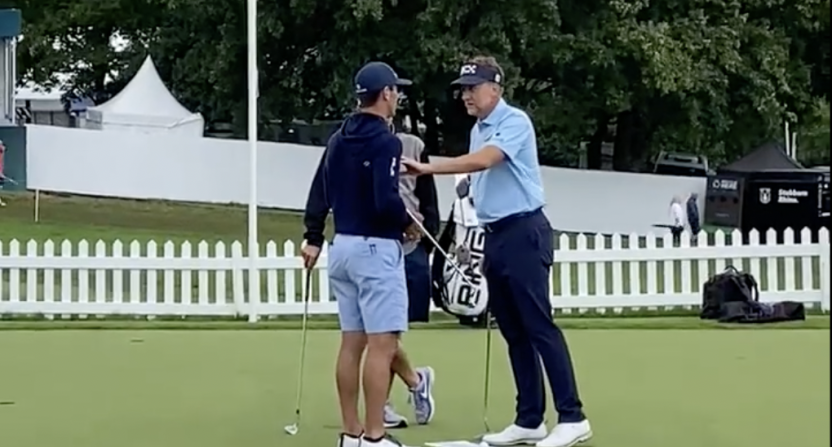 The battle between the PGA Tour and LIV Golf has been a war of words so far, but what happens when golfers from the rival tours are forced to share the same green? We got a taste of what that looks like on Thursday when Billy Horschel and Ian Poulter, two of the most outspoken voices in the conflict, came face-to-face.

PGA Tour defender Horschel and LIV Golf proponent Poulter were seen getting into it on the putting green at Wentworth Golf Club on Wednesday as they prepared for the now-delayed BMW PGA Championship (via New York Post).

I wonder what Billy Horschel and Ian Poulter are talking about here 👀🥊 pic.twitter.com/kFThmGCKsR

It’s unclear what the two were saying to one another, but there’s enough animated body language going on that we can assume it wasn’t a super-friendly chat, especially when you consider what Horschel said on Tuesday.

“The guys that have publicly stated they want to play less, those are the hypocrites,” Horschel said the day before. “It’s not every one of them. And there are a few of those hypocrites here this week because they wanted to play less but they are playing another event that’s not a LIV event.

“I honestly don’t think that the American guys who haven’t supported the Tour should be here. Abraham Ancer, Talor Gooch. … you’ve never played this tournament, you’ve never supported the DP World Tour. Why are you here? You are here for one reason only and that’s to try to get world ranking points because you don’t have it.”

While Horschel didn’t namecheck Poulter in his comments, it makes sense that the LIV Golf player might want to stand up for his fellow golfers.

The tournament is on hold for a few days following the death of Queen Elizabeth II, but we’ll see if there are any further fireworks ahead once these golfers have to share the course.

UPDATE: Without getting into details, Poulter said that their discussion was “friendly.”

“I have no problem with Billy,” said Poulter on Thursday. “All these [players] out here, I have been friendly with for a really long time. So let’s draw a line between personal and business. It’s really easy to have a level-headed conversation with someone when you respect them, even though you have a difference of opinion. That’s fine. I can still be somebody’s friend.
“That’s the nice thing about this game we play, and it will be a sad time if people let it spill over and take friendships away,” Poulter continued. “That would be sad. We had a lovely chat the night before for an hour, outside the front of the hotel. There’s nothing in it. Billy is quite an animated guy, and I am, too. He has strong opinions, and I normally do, too, so you can tell how that would look on camera.”