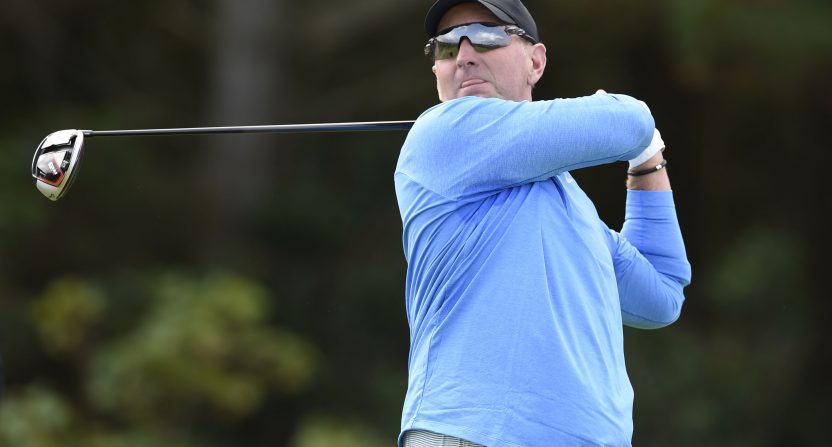 There are some people in golf who are very easy to cheer against. David Duval is not one of those people, which makes this a lot less fun, but whenever a player in a major tournament puts up a 14 on a single hole, it’s definitely a story.

Duval isn’t really a playing professional anymore; he’s played just four events in 2019, sits at #2080 in the world rankings, and spends most of his time as a Golf Channel analyst. He’s in the Open field as a past champion under 60, having won the 2001 Open before various health issues (including vertigo) derailed his playing career. (He didn’t win a tournament after the 2001 Open.) The first round actually started promisingly, with Duval making two birdies on his first two holes.

Things went awry quickly, and hit a nadir on the par-5 seventh hole, with Duval losing two balls off the tee, hitting a third ball, then playing a different ball by mistake. It was such a complex series of misadventures that at first he was given a 13, and after the round it was revised up to a 14 with this accompanying announcement.

The adjustment was made following an error in reviewing his score on the 7th hole. David lost his first two balls from the tee and then played a wrong ball for the third ball played from the tee. On discovering the mistake at the green he had to return to where the wrong ball was played but the correct ball could not be found.

Therefore he had to play again from the tee for a fourth time under penalty of stroke and distance. He played six shots in completing the hole with the fourth ball from the tee. He incurred a two-shot penalty for playing the wrong ball but the strokes played with the wrong ball do not count in his score (Rule 6.3c).

No further penalty was applied for the score adjustment.

Again, there’s not a ton of the usual joy to be found watching professionals hack it around to big numbers, which happens once in a while. Duval clearly wasn’t happy after the round, either. Via PGA Tour writer Sean Martin:

“You have an obligation as a professional to post your score,” Duval said Thursday. “I teed off in The Open today and I shot [91], so put it on the board.”

He attributed the incorrect ball to his own mistake, as well:

Things went awry two holes later. He lost his first two tee shots, and his third one went into the rough. A marshal told Duval he had located it, but it was the wrong Titleist 2.

“I didn’t check it close enough,” Duval said. “I mark my balls with a yellow dot because everyone uses red and black. I don’t see red well.”

It sounds like Duval is going to head back out tomorrow for the second round, too, although he apparently is battling some tendinitis now:

Hacking so many shots out of the rough caused the tendinitis in his left arm to flare up, making it difficult to hold the club.

Duval was eight shots higher than the closest players on the leaderboard.

“It’s not reflective of anything I’ve been doing,” Duval said as his eyes appeared to water. “It’s just one of those god-awful, nightmare scenarios that happened today.”

Credit Duval for not skipping a media session that was never going to be fun; when you post a 14 and a 91, there’s only one type of story that’s going to be written about you. Hopefully he puts up a better number tomorrow.