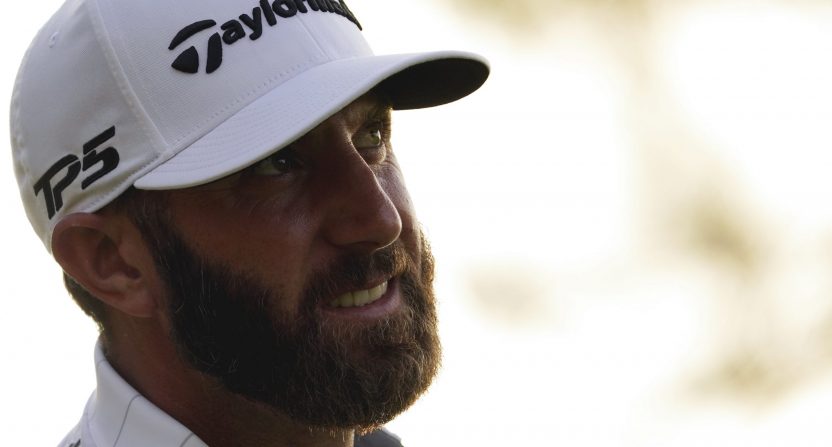 Saturday’s third round at Augusta National featured, for a brief moment, a massive pileup on top of the Masters leaderboard.

It was never likely to stay that way, of course; leaderboard gravity (a Mike Tirico phrase) is always apparent on the weekends at majors, especially at Augusta, even without fans. But it still looked like we’d have a good shot at a bit of a horse race on Sunday, the kind of mix of big names and rising talents that could be a fantastic reward for everyone tuning into what will hopefully be the only November edition of the Masters ever.

And, with one exception, that’s what we have, with three players heading into Sunday at -12 and nine more within four shots of them. That one exception, though, is a big one, as Dustin Johnson fired a fairly flawless, bogey-free 65. 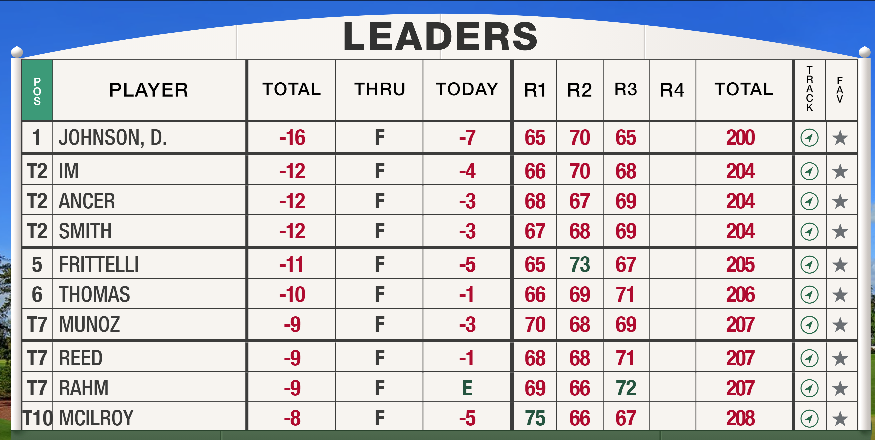 These scores on the whole are low, a combination of soft greens (soft everything, as we’ve seen from the amount of mud balls players complain about) and a total lack of wind for three days, neither of which are usually

Dustin Johnson: 16-under, tying Jordan Spieth for lowest 54-hole score in the history of #TheMasters

Johnson's score of 65 is the lowest third round by a 36-hole leader since Tiger Woods in 1997.

Normally, when one of the top players in the world holds a four-shot lead heading into the final round of a major, it’s a setup for a Sunday sans suspense. Dustin Johnson, though, might be the one exception to that rule. (Jordan Spieth, of course, also once blew a big Sunday lead at Augusta, but he no longer counts as an exception because, well, he’s bad.)

Johnson’s close calls in majors are legendary, of course. Going back to 2010, when he immediately coughed up a lead with an early double bogey at Pebble Beach and then missed out on a PGA playoff at Whistling Straits due to the infamous waste area club grounding. There have been many more similar circumstances ever since, up to and including the PGA Championship in August, when Johnson shot a respectable-but-not-enough 68 en route to losing another major he led on Saturday night.

“Man, DJ’s gonna have this wrapped up on Saturday!”

Johnson somehow has just won major win, at 2016’s U.S. Open, and even that one was a wild ride, with a questionable penalty that hovered over Johnson as he played Oakmont’s back nine.

He’s clearly one of the most talented players of his generation, and from a pure talent standpoint, one of the best players of all time. He has five runner-up finishes in majors (he actually has the runner-up career Grand Slam), and he should absolutely win the Masters tomorrow. He’s playing the best golf on a course that should always have suited him, and he has a huge lead. There aren’t even any fans around, although Johnson has never exactly seemed responsive to external stimulus, so it’s possible that will hurt him by helping the young peloton behind him.

The incurious stride of a man who has seen a real boat party in his day. pic.twitter.com/kCTOMzd53x

It’s a Masters in November, finishing up in the early afternoon thanks to football. It’s absolutely not going according to any script we’ve seen before for one of golf’s most famous championships. If Johnson goes out and puts it away easily, that will certainly be another example of 2020’s weirdness encroaching on sports.

If Johnson loses this one, though, he might replace Greg Norman in the pantheon of horrific losses for incredibly gifted players. Even for neutral fans hoping for Sunday excitement, if Johnson starts slow and the pack starts catching him, it’s going to be brutal to watch.

A DJ collapse might bring a bit of timeless familiarity to 2020, but no one would be happy about that.