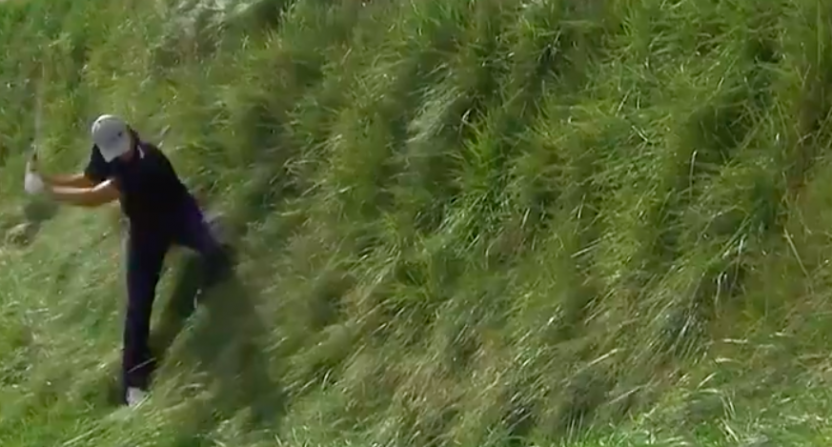 The Ryder Cup is underway and, while Jordan Spieth might have some pretty major accomplishments to his name, he just may have outdone himself on Friday with a pretty incredible shot.

The 17th hole at Whistling Straits in Wisconsin includes a grassy hill close to the green that provides almost no view of the pin. That’s where Spieth landed on the previous shot, specifically right on the edge of the hill where his only option was to hit the ball vertically and hope for the best.

Spieth did a little better than hoping for the best.

While the camera followed Spieth as he chipped the ball upward and immediately started sliding downhill, the ball arced overhead and not only made its way to the green but landed just a few feet from the hole. Narrowly avoiding the water below, Spieth had to rely on the reaction of the crowd to inform him that he’d hit the ball about as well as anyone possibly could.

As you probably guessed, pretty much everyone had the same reaction. How in the world did Spieth do that???

Absolutely insane shot by Jordan Spieth…as his momentum almost carries him into Lake Michigan & the crowd breaks out a USA chant.pic.twitter.com/AuneE4kc25

Are you kidding, Jordan Spieth?

One of the most chaotic and impressive golf shots ever.😂 pic.twitter.com/1lXAF7rQrZ

Unfortunately for Spieth and partner Justin Thomas, that shot didn’t make up for the rest of the day. Thomas missed the putt, which ended up costing them the match against Spain’s Jon Rahm and Sergio Garcia. There’s still a lot of golf left to be played in the Ryder Cup but will we see a shot better than this one? Hard to see how.