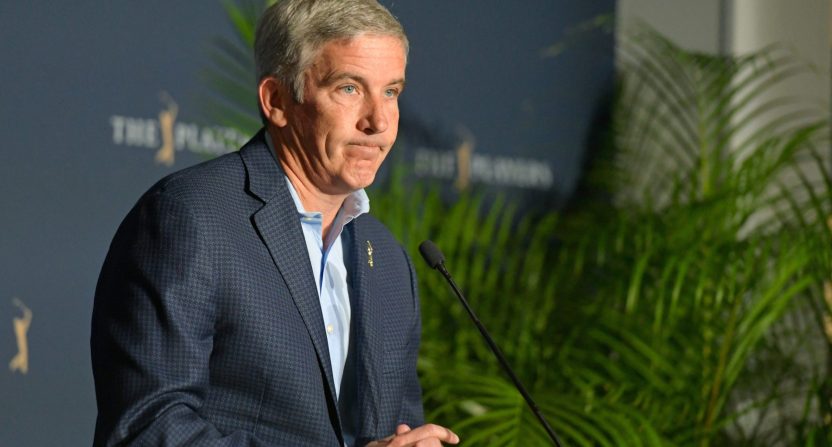 The golf world has been turned on its head this week with several big-name PGA Tour players announcing that they will be playing in the Saudi-backed LIV Golf Series that is hosting its inaugural event on Thursday.

Some notable names who make up the field for the first LIV event are Phil Mickelson, Dustin Johnson, Sergio García, and many others.

It has already been assumed that these departing players would not be able to play at PGA Tour events following their decision to jump ship, and that has been confirmed on Thursday.

PGA Tour commissioner Jay Monahan released a statement on the Tour’s behalf confirming that they have suspended current LIV players as well as any player that plans on playing with them in the future.

Many around the golf world are very torn on the timing of this statement.

Some believe that this was the correct time to warn players of what is to come if they decide to take the leap to the LIV Golf Series.

This wwwwwwwhole thing makes me anxious. I believe and understand the PGA Tour had to make a stand. Just uncertain of what professional golf will look like going forward. https://t.co/P8ZHnTIfsq

The trap door lever has been pulled. https://t.co/6pCc06R0fu

Others think that making a statement on this at this time ultimately only takes away from the RBC Canadian Open, which began on Thursday morning.

PGA Tour showing how much they care about their own ..taking even more attention away from the @RBCCanadianOpen . Couldn’t have released this yesterday or after close of play today? Good job Jay 👍 #PGATour #LIVGolf https://t.co/ZqhsGqdFVW

While the PGA Tour certainly hopes this dissuades other players from leaving, it appears that more may be following these initial 17 that have already left.

It was announced on Wednesday that both Bryson DeChambeau and Patrick Reed will also be joining the LIV Golf Series later this month. There have also been rumors that PGA Tour veteran Rickie Fowler could be shortly behind DeChambeau and Reed.

At the end of the day, despite political ramifications, these players are making financial decisions that can ultimately greatly impact their families. No amount of resistance from the PGA Tour may be able to stop even more prominent players from leaving in the future.