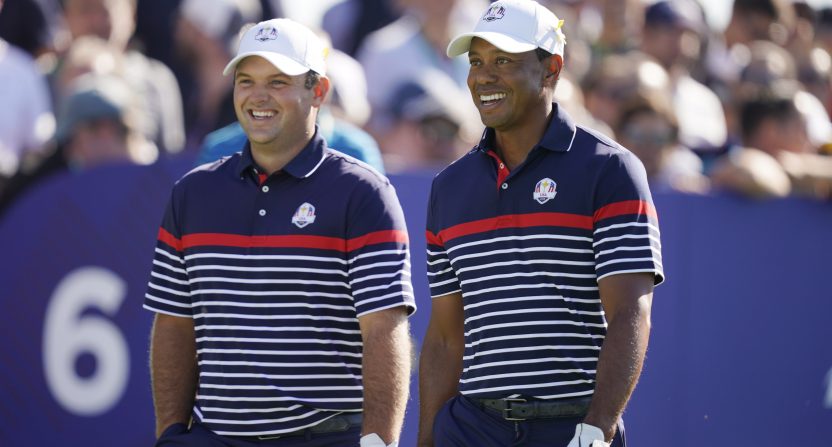 The Ryder Cup might not be the most prestigious event in golf, nor the truest test of skill. But it is, without question, the most fun weekend on the golf calendar.

This year’s edition from Paris tees off tonight at 2 AM Eastern time, with four best ball team matches. Those pairings were announced earlier today at the tail end of a lengthy, hilariously overdone Opening Ceremony, and there were a few surprises:

It’s fun to break down the matches team-by-team, and the Americans pairing a returned-to-the-top Tiger Woods with Mr. Ryder Cup Patrick Reed against one of the stronger possible European teams will make for a very interesting anchor match, if you want to get up at 2:55 AM Eastern to catch it from the start.

The truth is, though, that all of these players are among the best in the world. The margins are such that over a single 18-hole match, anything can happen. Over the course of 28 matches, things can even out a bit, but the fact that not everyone has to play every match means a lack of depth can be masked a bit, and again, the sample remains small.

Which makes the American drought in Europe (the United States hasn’t won a Ryder Cup in Europe since 1993, and has won only two of the last eight overall) so staggering. You’d think luck would seem to factor in and even things out. That might happen this weekend, or it might not. Regardless of the outcome, it will be an entertaining three days. Some outcomes, though, would be much more rewarding than others.

Here are those outcomes, ranked from least entertaining to most.

5. Americans win in a blowout

This would suck! American fans might enjoy it, and the players would surely relish a pressure-free Sunday en route to a second-straight Ryder Cup win, but we just saw an American blowout win two years ago. Waiting two years for the Ryder Cup to have it essentially over before the final day would be a letdown.

We’ve also seen this before, and while it can be exciting, this would probably result in the least amount of drama. There’s a reason it comes up just short of a potential American win in a similar fashion, though, which we’ll get to.

The reason this ranks ahead of the European win isn’t that we haven’t seen a USA win in Europe in a long time, though that helps. It’s that a close American victory means there’s a chance that Tiger Woods (playing in the Ryder Cup for the first time since 2012, and for only the third time since 2006) or Phil Mickelson (playing perhaps his final Ryder Cup, although it’s tough to count him out) filled the role of hero. If that happens, it’s guaranteed to be memorable.

The two might even team up at some point, though the pairings today make it seem much less likely than it was a few days ago, when Phil was saying he and Tiger would “welcome” it.

Yes, yes, a tie doesn’t provide resolution, etc. But think of the events that would have to happen for a tie to occur! By default things would be close and tense throughout, especially on Sunday. Ryder Cup rules would dictate the Americans retaining the Cup in this scenario, so we’d have the possibility of a United States team celebrating a “win” in Europe they didn’t actually win, the Europeans would likely have plenty to say about it in their press conference, and things would stew for two more years.

1. Europeans win in a blowout

Just think of the ramifications if the Europeans win in another rout. Four years ago, that’s exactly what happened, and it led to Phil Mickelson’s press conference evisceration of Tom Watson, the creation of the much-talked-about, almost-as-much-mocked Ryder Cup task force, and two years of overthinking and overplanning en route to the American win at Hazeltine in 2016.

While many of those changes, especially the rotation of captains and vice-captains, should indeed help foster a sense of team cohesion going forward, it was always a little silly; it’s three days of golf with a ton of good players. The deep dives into minutiae and planning were way over the top, and to have the American team end up on the receiving end of a similar beat down four years later, with a much improved roster and all of the planning they crowed about for years?

The fallout would be hilarious.

Probably not; the American team is strong enough that the odds of a blowout seem small. But the course did apparently surprise the American side with how difficult it’s going to play, and it certainly favors more accuracy off the tee (via thick rough and copious amounts of water) than the United States would choose if they had the option.

I know, I know, that outcome only ranked fourth on the list. But that’s the thing about the Ryder Cup: pretty much all the outcomes are going to be entertaining. Just in very different ways.