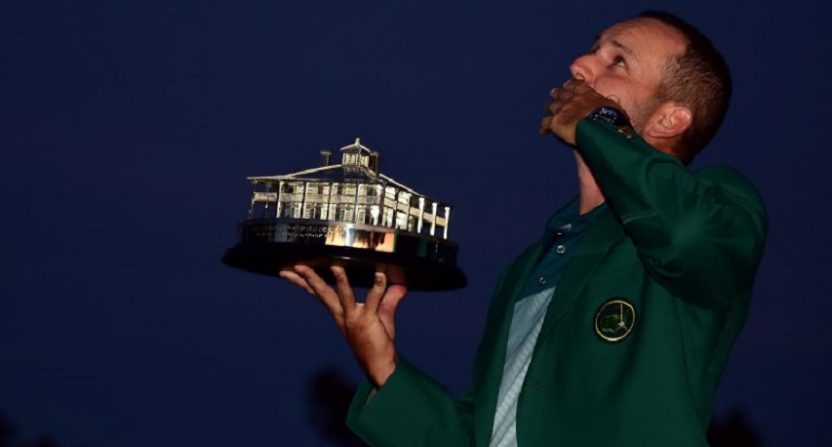 Well, hell, the Masters was a lot of fun Sunday.

As Sergio Garcia sank a putt to defeat Justin Rose in a playoff, taking home his first major, the Augusta crowd roared. Chants of “Serg-i-o! Serg-i-o!” reverberated around the 18th green. And while Sergio Garcia winning after so many close calls is the obvious story, and we’ll definitely get to him, let’s spare a few thoughts for Justin Rose.

Rose’s winning 2013 U.S. Open performance at Merion was a very solid all-around display, a microcosm of Rose’s game, as he managed the very difficult course, finishing at +1, two shots clear of second. But that event is best remembered for the most recent example of Phil Mickelson’s Charlie Brown-esque misses.

And now, as he came up just short of his first Masters win (he would have joined Ben Hogan as the only men to win majors at Merion and Augusta National, which I’m contractually obligated to mention as someone who writes about golf), Rose’s performance is going to once again be overshadowed by his main opponent. Of course, had he won, that would still have been the case, given Garcia’s own history.

Sergio Garcia is only 37, having been around the upper echelon of golf since his 1999 PGA Championship duel with Tiger Woods, and yet he’s perhaps best known for what he hasn’t done. You never want to be the best player to never win a major, and that’s exactly what Sergio has been, off and on throughout his career.

As Rose and Garcia entered the last round tied at -6, with some quality players hanging around them on the leaderboard, it seemed like Sunday could be anyone’s game. And yet, as the afternoon went on, it actually just became a two-man contest. Players like Rickie Fowler, Jordan Spieth, Ryan Moore, and Charley Hoffman fell down the board, and the players who did go low (guys like Charl Schwartzel and Matt Kuchar) had too much ground to make up without Rose and Garcia collapsing.

Instead, both men would play a solid front nine, making the turn tied at -8. At one point, Garcia had widened the gap after Rose bogeyed the fifth, but the Englishman reeeled off three straight birdies at 6, 7, and 8 to bring things back together.

As they started the back nine, Garcia’s traditional Sunday woes popped up; he bogeyed 10 and 11, while Rose held steady with pars. And as the pair made their way around Amen Corner, there was almost another example of the very worst part of golf: penalties only visible through high definition slow-motion video.

Garcia took a drop after hooking a drive into the hazard on 13; after doing that, he carefully removed some pine straw around his ball. And, at one point, the inevitable happened:

In the words of George Costanza: it moved. But it probably wasn’t noticeable to the naked eye and considering that, if anything, it made his lie worse, the fact that video was reviewed and no penalty issued was the absolute right call. It was handled fairly swiftly on the course, avoiding a Dustin Johnson-like incident, and Garcia laid up from that position, then got up and down for a par.

Rose three-putted the same hole for a par, and that recovery was all Garcia needed to get back in the groove. He birdied 14, and then cranked a monster drive on the par 5 fifteenth hole. Trailing by a stroke, he was very aggressive with his line, and, well, this happened:

It actually clipped the flag on the bounce. Can you imagine if Sergio had struck the stick and bounced back into the water? No one would ever forget. Instead, Rose made a birdie of his own, extending the lead back to two shots. Garcia stood over the putt, a crucial one in the home stretch of a major on a Sunday, the very type of putt he’s spent most of his career missing:

Rose and Garcia headed to 16 tied at -9, and no one was really within striking distance of them. The clubhouse lead was Charl Schwartzel’s -6. It was almost a match play situation, which the commentators didn’t hesitate to bring up. That’s a flawed and lazy comparison, because there’s no such thing as a two-shot swing on any given hole in match play, which is a key consideration with the water in play on 16, among other factors.

Instead, it was a stroke play duel, which has a very different vibe than a match, even. We were lucky enough to see it last summer at the British Open, as well, with Mickelson and Stenson battling it out. Sunday’s golf wasn’t quite at that stellar level, but it was a more familiar stage, and so fun to follow.

Both players hit beautiful shots into 16, Rose to eight feet, Garcia to six feet. That set up this exchange:

Rose poured his in, while Sergio made a very nervy stroke to miss a short one. Garcia trailed by a shot with two to play.

On 17, Garcia once again found himself in great position for birdie, four feet from the flag. Rose found the front bunker, and failed to get up and down, meaning Garcia was essentially assured of at least a tie, and if he could just convert a very short putt, he’d be in control heading to 18.

Instead, he made what can only be described as a horrendous stroke.

Something tells me that Sergio hitting a punch cut shank putt is not ideal in the nerves category but I'm remaining optimistic.

Garcia looked like he almost whiffed that putt on 17.

So it was tied as they went to 18. They both found the fairway, and then:

Rose misses his birdie, Garcia has a chance to win it with a relatively straight and short putt, and he missed it. At that moment, it was hard to imagine anything other than a Garcia loss in the playoff.

When Rose’s tee shot on the playoff hole (they played the eighteenth again) seemed destined for somewhere you’d need a compass and Deep Woods Off to reach, only to kick back out towards the fairway, it once again seemed like a sign. But Sergio striped another driver, then as Rose had to lay up, struck a gorgeous approach on 18 for the second time in a row.

Rose was unable to get up and down, meaning Garcia had two putts to win. That seemed to free him up, and this was the result:

That was the perfect way to close out an amazing tournament. And unlike last year’s Spieth collapse, no one backed in, no one even really suffered (though Spieth did hit it into the water on 12 again, somehow). We got to watch Sergio clear room for a green jacket by shedding the unfair monkey that he’d been carrying around for 18 years.

Well, hell, the Masters was a lot of fun Sunday.