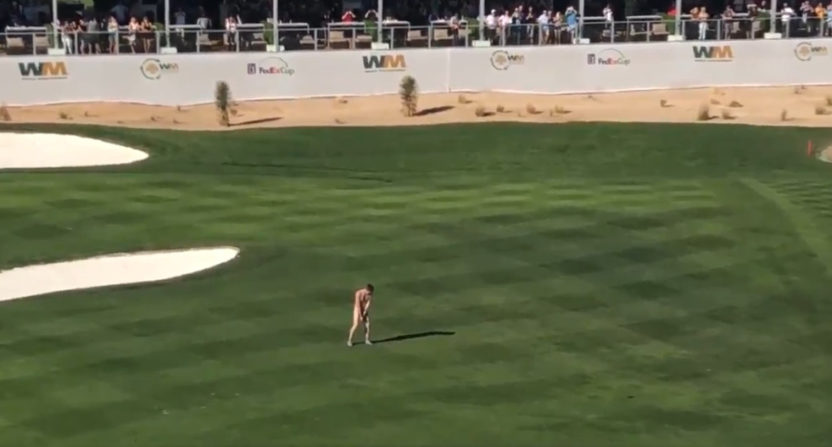 Getting arrested for indecent exposure and disorderly conduct while showing signs of intoxication, all on a golf course on a Wednesday afternoon in Scottsdale in front of plenty of fans watching the Waste Management Phoenix Open Pro-Am? That’s what one streaker pulled off this week. Here’s a video showing the end of this man’s invasion of the 17th hole, including him taking a swing at the air, running and falling over, then going into a bunker and tossing sand LeBron James-style, then breakdancing before being led away:

Chris Cole of Azcentral has more on the story:

As is typical with this kind of thing, the man stripped off his clothes and ran out into the middle of the hole near the green.

…Azcentral features director Ginger Rough was out on the scene, where she said he lasted about five minutes before he was escorted off the course by security.

People were laughing, clapping and throwing golf balls at him, according to Rough.

He also received a standing ovation.

Scottsdale police identified him as 24-year-old Adam Stalmach, who was arrested and is facing charges of indecent exposure and disorderly conduct.

Well, it’s probably better if you become a streaker after some alcohol intoxication than if you do that sober. But won’t someone please think of the dignity of the Waste Management Phoenix Open Pro-Am? This is the biggest delay in play we’ve seen since the weekend, and J.B. Holmes wasn’t even involved this time. Heck, Holmes’ four-minute shot looks positively rapid by comparison. But hey, this streaking performance will live forever. Look forward to having this video played for you regularly, Adam.