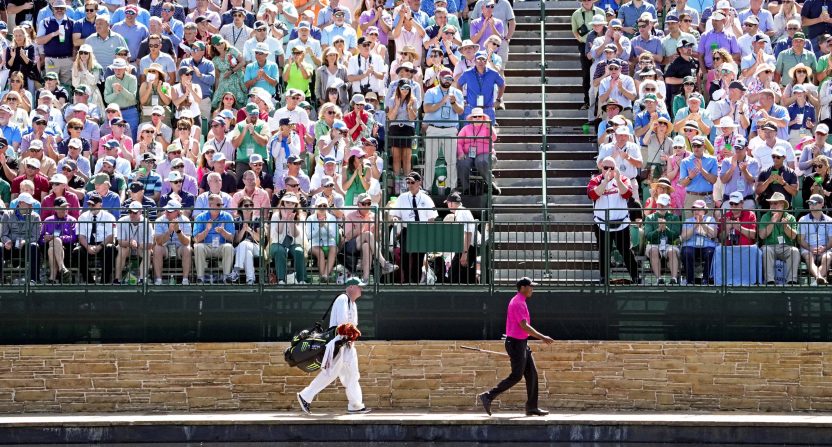 Sports fans around the world have been celebrating the return of Tiger Woods at the 2022 Masters at Augusta National.

Tiger shocked everyone when he announced that he was traveling to Augusta late last week. He played practice rounds at the course to see if his body could hold up to the rigorous amount of walking that comes with playing in the tournament.

Ultimately, he decided to play and ended up putting together an extremely impressive performance on Thursday, all things considered.

Woods finished the day at -1 under par, with some memorable moments throughout. The five-time Masters champion nearly got himself a hole-in-one on the sixth hole, which notched him his first birdie on the day.

Nearly a hole-in-one from @TigerWoods 😳 pic.twitter.com/8xVAGUkOrj

He was able to make a long putt on the 16th hole as well, flashing a vintage Tiger fist pump in a moment that gave fans flashes of the golfer they remember.

The birdie moves Tiger back into red numbers. pic.twitter.com/qb6AvOXvVg

Finally, Woods was able to make a clutch putt to save par on 18, capping off an extremely impressive performance for someone who hasn’t played on the PGA Tour since November 2020.

A par save on 18 to keep @TigerWoods in red numbers for his opening round.

As expected, Woods has been the talk of the tournament to this point, with countless sports fans praising the legendary golfer for his impressive performance.

Tiger Woods just finished under par in the 2022 Masters after 508 days.

Hats off to the Golf Goat @TigerWoods this weekend. Grit and hard work can combine for a comeback- the world is cheering for you . Congratulations, my friend.

In his first round of competitive golf in 508 days and coming back from what was essentially a shattered leg, Tiger Woods shoots a 1-under par at the opening round of The Masters.

It will be interesting what kind of impact Thursday will have on his body and ability to play for the rest of the tournament.

That said, Tiger has done miraculous things at Augusta National before.

Even if he doesn’t go on to contend in the tournament, Thursday was spectacular and it will be a round of golf that fans will never forget.