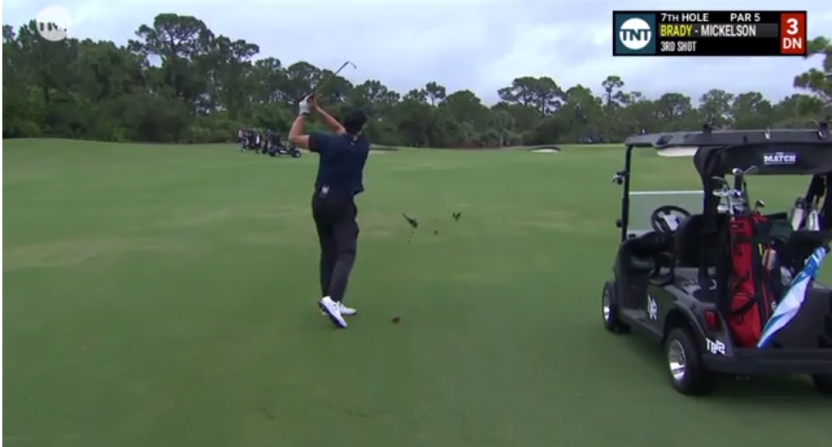 Tom Brady was roasted like crazy on Twitter after his golf game looked pretty brutal early on at Capital One’s The Match. Brady and Phil Mickelson are taking on Tiger Woods and Peyton Manning in the charity match at Medalist Golf Club in Hobe Sound, FL.

Here’s an example of how Brady looked on the golf course through six holes:

And Tiger Woods cuts off his chat with Charles Barkley to help Peyton Manning with a read. #TheMatch pic.twitter.com/LVuwycthnr

And an example of the jokes, with this one coming from New Orleans Saints head coach Sean Payton about the new Tampa Bay Buccaneers quarterback:

Then came the seventh hole. TNT’s Charles Barkley also roasted Brady’s golfing while talking to the quarterback, and was quickly reminded why you don’t talk trash to the greatest athletes of all-time.

The six-time Super Bowl champion holed out this insane shot for birdie, and told Barkley, “Take a suck of that, Chuck.”

And then Tom Brady does that.

While Brady was struggling, four-time major champion Brooks Koepka tweeted that he would donate $100,000 through the Brooks Koepka Charity Foundation if Brady made a part on the front nine.

That’s why you’re the 🐐 @TomBrady

As for Peyton Manning, the retired quarterback’s golf game has been impressive all day. He drained this difficult putt for birdie: