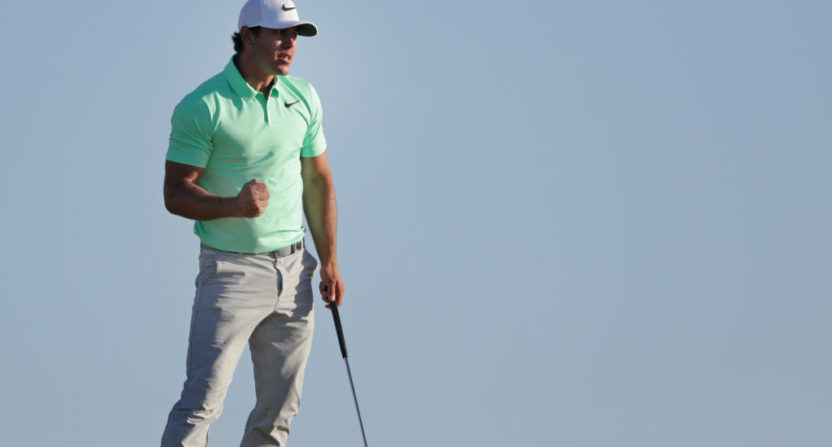 The latest U.S. Open winner spoke only two years ago about how he preferred baseball. That would be Brooks Koepka, who claimed his first major title Sunday at Erin Hills, Wisconsin, finishing -16 for the tournament. Back in 2015, Koepka told Golf Digest‘s Jaime Diaz golf wasn’t his preferred sport, and he only took it up thanks to a car accident:

In the most anti-self-promotional way imaginable, Koepka became a golfer because of his face. At 10, he was in the front seat when a car driven by a babysitter was hit at an intersection. Brooks’ nose and sinus cavity were fractured on the dashboard, and for the entire summer he couldn’t play any contact sports. As an alternative, he began spending his days at West Palm Beach’s public Okeeheelee Golf Course, where he played in a junior program, dominated early, and never looked back.

Well, not exactly. “If I could do it over again, I’d play baseball—100 percent, no doubt,” he says. When sporting a baseball cap or jersey off the course, Koepka often gets asked if he’s a major-leaguer. “To be honest, I’m not a big golf nerd,” he says. “Golf is kind of boring, not much action. I come from a baseball family, and it’s in my blood.”

His great-uncle Dick Groat is the former Pittsburgh Pirates shortstop who won two World Series and was the 1960 National League MVP. Koepka played a mean Little League shortstop but somehow wasn’t much of a hitter. “Could never hit a home run as a kid,” he says. “Maybe I was too small, but it drove me nuts. I kind of wish I’d stuck with it.”

Well, at least Koepka’s found a lot of success playing golf. He was a three-time All-American at Florida State and went to Europe after narrowly missing out at Q school in 2012, then promptly recorded three wins on the Challenge Tour in 2012 and 2013. He won the Turkish Airlines Open on the European Tour in 2014, and won the PGA Tour’s Waste Management Open in Phoenix in February 2015. He’s also found some great success in majors, qualifying for the 2012 U.S. Open as an amateur, recording a 10th-place finish at the 2014 U.S. Open, and finishing tied for fifth and fourth at the 2015 and 2016 PGA championships. And now he’s got a major win under his belt. Here’s his final putt:

This was a great tournament from Koepka, and at just 27, there may be more success ahead for him. It’s not baseball, but it’s not bad either. And he’s proven better at this than he is at making predictions about LeBron James. Plus, he has a pretty sweet Michelob Ultra endorsement, which could result in a fan winning 95 cases of beer. So it’s not bad to be Brooks, even if he isn’t playing professional baseball.

2 thoughts on “U.S. Open champ Brooks Koepka only took up golf due to a car accident, found it “boring””