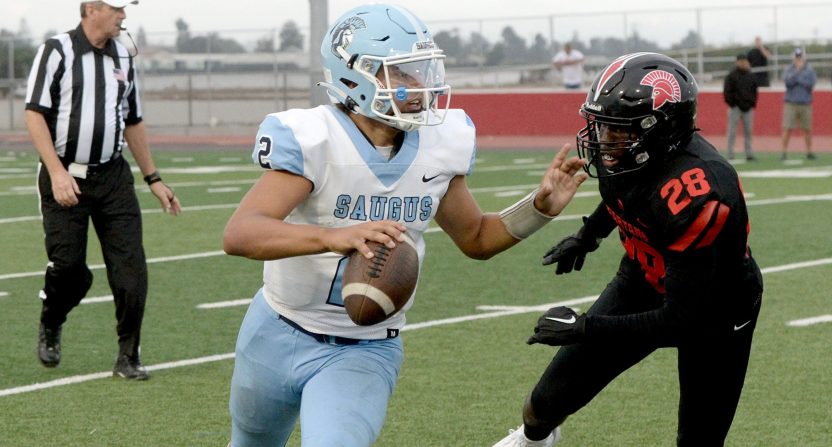 The Saugus High School football team will no longer carry the controversial “Thin Blue Line” flag with them onto the field before games after various individuals said, “the symbol makes them feel uncomfortable and unwelcome.”

“It is important to support law enforcement. Those of us with firsthand memories of November 2019 will never forget their heroic response and can be nothing but thankful for their selfless acts of service.

“It is also important to listen to the voices of those who feel uncomfortable or unwelcome.

“Choosing other ways to honor law enforcement seems a small price to pay to live up to our commitment to fostering a culture of inclusivity, kindness, and respect.”

The controversy stemmed from the football team’s entrance onto the field before games, in which players would carry various flags, including the U.S. flag, school-related flags, and the “Thin Blue Line” flag.

While the “Thin Blue Line” symbol represents solidarity with police and law enforcement to some, others see it as a symbol of right-wing groups and white supremacy. The creation and popularization of the “Thin Blue Line” mantra and symbolism also have roots in racism and extremism even before it was co-opted by modern right-wing groups, to the point where some police departments have banned its usage.

The NHL’s Minnesota Wild courted controversy in August when they announced a Law Enforcement Appreciation Night that included a t-shirt with “Thin Blue Line” imagery on it. The promotion was canceled soon after.

The Saugus High School football team next takes the field on Oct. 7, so there will likely be some eyes on that game to see if there are any reactions to the announcement, as some community members are planning to show up with their own flags.

Parents at Saugus High School in Santa Clarita, are having a "Blue Lives Matter" protest on October 7 after the football team announced they will no longer carry the “Thin Blue Line” flag in support of law enforcement out onto the field.

Why were they allowed in the first place? pic.twitter.com/sqSOCMqgg7