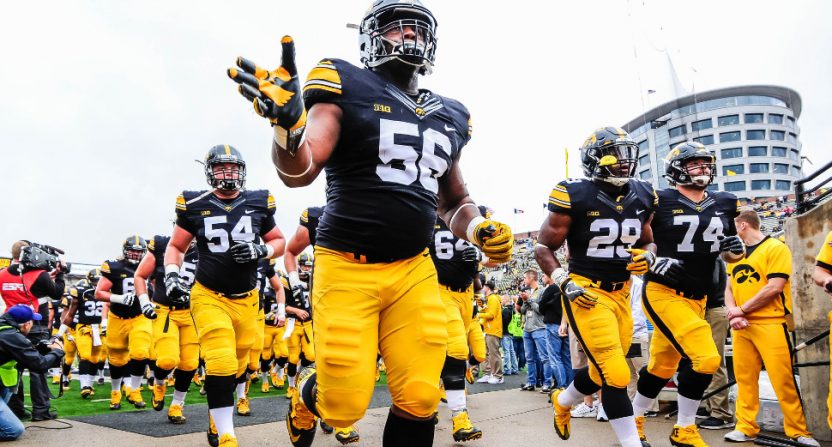 It’s pretty remarkable to see someone go from the first-overall pick in a league’s draft to a training camp cut a year later, but that’s what happened with former Iowa Hawkeyes’ defensive tackle Faith Ekakitie. Ekakitie was a solid player at Iowa (he’s #56 in the photo above), playing in 13 games in his senior year in 2016 and recording 39 total tackles (while bizarrely also making headlines for a Pokemon Go incident), and the Winnipeg Blue Bombers selected him first overall in the 2017 CFL draft (of Canadian players; Ekakitie is from Brampton, Ontario), but he played in just 14 (of 18) regular-season games in his first season and recorded just five tackles. Even some top CFL picks take a while to break into the league, but there were indications that Ekakitie might be cut heading into this training camp, and that came to pass Saturday evening. So what went so wrong for Ekakitie? Well, even he wasn’t sure of his fit with the team this year:

“To be honest with you I have no clue,” the 25-year-old said Tuesday.

“I don’t really know exactly where I fit in. My goal is honestly just to be able to help the team any way I can. I know it sounds cliché, but our goal is to win a Grey Cup this year and if I can put my personal goals aside to help us win a Grey Cup, then I’ll do whatever.”

…“The first step for me was losing weight and just coming back in a lot better shape than the year before,” Ekakitie said. “I still have a ways to go now, but that was the biggest thing for me, giving myself a chance to compete.

“I wasn’t necessarily gassed last year but in terms of being quick and explosive off the ball, the weight loss has definitely helped in that area. I’m in the type of shape that I need to be in for the CFL game.”

And there were reports that Ekakitie did look more in shape and more impressive this year. But that still might not have been enough, for a couple of reasons. For one, the CFL’s ratio rules (each team must start seven Canadians alongside 16 international (read: American) players and one quarterback (generally also American)) mean that every team needs Canadians, but that they have a fair bit of flexibility in how they set up what positions will be Canadian. The Bombers drafted Ekakitie hoping that he could become a regular starter at defensive tackle, but that wasn’t happening at this point, and they’ve shifted to a plan to start four Americans on the line. So even the backups don’t need to be Canadian at that spot in that case, and Ekakitie’s significant salary as a first-overall pick (estimated as around $90,000 Canadian, around $70,000 U.S.) made it expensive (and the CFL has a salary cap) to keep him as a seldom-used backup who wasn’t helping the team from a ratio perspective.

Plus, even at a slimmed-down 292 pounds, Ekakitie wasn’t a great fit for special teams. That’s more because of his position than anything about him, but it’s much easier to stash receivers, linebackers and defensive backs as occasional special teams players. Many top draft picks have had a couple of years of leeway to develop as special teams contributors before turning into regular starters, and playing a position that’s a more natural fit for special teams is an easier way to stick around.

There are a few mitigating factors with this pick, of course. For one, the CFL draft only covers Canadians (Americans enter the league through the negotiation list process or as free agents), so this isn’t a draft of every top player available the way it is in many other sports. And many of the top prospects in the 2017 draft were receiving significant NFL interest, including top-ranked prospect Justin Senior, who wound up signing with the Seahawks; that may have convinced Winnipeg to draft someone who they figured they could at least sign, even if he wasn’t initially their top target (Ekakitie was ranked fifth overall in the final prospect rankings, and 11th and 14th in the two rankings before that). And if this pick had worked out, they would have landed a Canadian who could play an often-American position, which is huge for a team’s ratio.

Still, this is a pretty dismal result for the Bombers. Drafting a player only to cut him a year later is far from ideal. And while that doesn’t necessarily mean the decision to cut Ekakitie was wrong (if they weren’t going to use him, it’s a smart move, giving them some cap flexibility and avoiding a sunk-cost fallacy), the decision to take him in the first place should be under a lot of scrutiny now. With the first overall pick, Winnipeg had a great chance to improve their club, and drafting well is key to sustained CFL success. But it sure looks like the Bombers didn’t draft well in this instance. Maybe Ekakitie winds up elsewhere in the CFL and turns into a second-chance success story, or maybe he never plays another down in three-down football, but he certainly didn’t work out in Winnipeg. And that’s quite unfortunate for the Bombers.