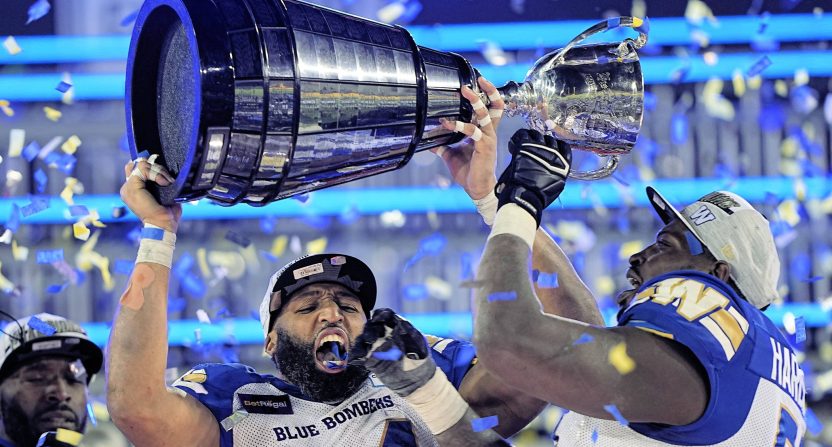 The 108th Grey Cup, the first one in Hamilton since 1996, almost ended in a victory for the hometown Tiger-Cats. They led the Winnipeg Blue Bombers 19-10 through three quarters. But Winnipeg took the fierce wind in the fourth quarter, and that wound up making a big difference; the Bombers outscored the Ticats 15-6 there to force overtime, and then won 33-25 in overtime after a touchdown and a two-point conversion on their possession and an interception on Winnipeg’s possession. And two kickoff rouges in the fourth quarter made a big difference there.

The rouge (or single) is a unique part of Canadian football, where a single point is awarded for various kicking plays, including punts or missed field goals that go through the end zone (including the sides) or are not returned out of the end zone (sometimes leading to unusual back-and-forth kicking plays near the end of games). On kickoffs, though, a point is only awarded if the ball touches a returner and the returner then opts to kneel down, or if the ball touches a returner and then goes out of the end zone; a straight kickoff through the end zone is not a point. (However, that only lets the defending team start from the 25-yard line, rather than the 35-yard line after they concede a rouge.)

So that makes kickoff singles more unusual, especially in a close game. And Winnipeg came up with two wind-aided kickoff singles from Sergio Castillo in the fourth quarter, leading to questions about the decisions from returner Tim White to either not leave those balls alone or return them out of the end zone. Here are those plays:

On the first one there, it’s possible that White was trying to return the ball and misjudged it in the fluttering wind. On the second, though, he definitely chose to take a knee. Now, that may have been a decision communicated to him by coaches rather than one he made himself; we don’t know at this point. And there is some value in the extra 10 yards. But that second single in particular meant that Hamilton’s regulation-ending field goal was only for the tie rather than for the win. Despite that, they came agonizingly close to a regulation win on the previous play, a goal-line pass to Jaelon Acklin knocked down by Deatrick Nichols:

Then, in overtime, Winnipeg quarterback Zach Collaros (who was named the game’s Most Outstanding Player, finishing with 21 completions on 32 attempts for 240 yards with two touchdowns and two interceptions) found Darvin Adams for a touchdown:

After the successful two-point conversion, Hamilton got their own possession, but Winnipeg came up with a remarkable game-ending pick juggled between three players, which Kyrie Wilson eventually grabbed and hung onto:

And the remarkable game-ending pick, which bounced between three players. pic.twitter.com/ETOpG2wlAe

One notable storyline in this game was how Hamilton starter Dane Evans (who only won that role after doing a great job coming off the bench in relief of Jeremiah Masoli in last week’s East Final, completing all 16 of his passing attempts) got hit in the head/neck region twice on one play in the second quarter and left the game. At that point, the Ticats trailed 7-0. But Masoli proved tremendous off the bench, leading them to a halftime 10-7 lead, and completing 20 of 25 passes for 185 yards with two touchdowns and an interception. He gave them a chance to win, and again proved the value of having two good quarterbacks.

Beyond that, perhaps the largest storyline of them all was the wind. The majority of the points in this game came when teams had the wind, and the wind played key roles in the kicking game, including with those rouges mentioned above, but also with some very short punts from Hamilton’s Joel Whitford in particular against the wind and with some long field goals from Castillo (who went 5-for-5 on field goals on the night). So Winnipeg’s coin toss victory that let them get the fourth-quarter wind wound up meaning a whole lot. In fact, in a post-game interview with TSN, Winnipeg head coach Mike O’Shea said “With the wind the way it was, it was going to be a coin-toss game, and that’s how it worked out.” That’s maybe a slight exaggeration, as there was a whole lot else that happened here (and even some of those wind impacts, like on the rouges, might have been mitigated by different decisions), but this certainly was a wind-driven game.

All in all, this was a tremendous cap to the CFL’s return-to-play season following their cancellation of the 2020 season due to the COVID-19 pandemic. It was the fourth overtime Grey Cup in 108 editions of the game (the others came in 1962, 2005, and 2016), and it was the first back-to-back wins for a team since the Montreal Alouettes in 2009 and 2010. And it’s set up a lot of excitement about the league going into the offseason. But it also may have many in Hamilton in particular wondering about what could have been, and while those kickoff rouges weren’t the only part of that, they were certainly a major part of it.