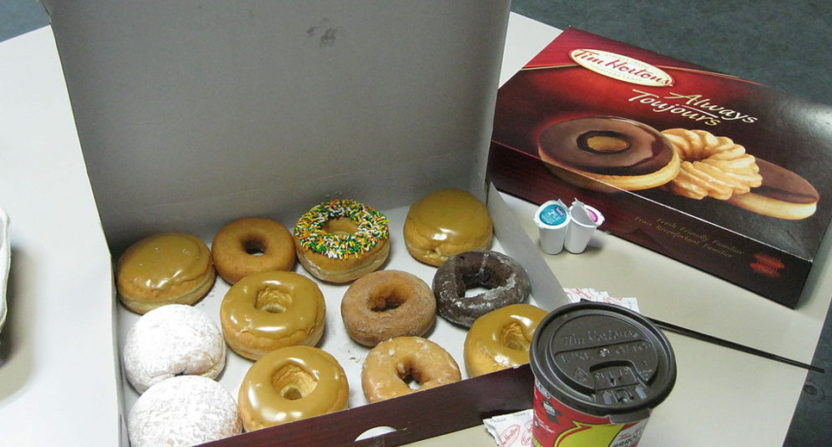 We’ve seen plenty of unusual questions at the NFL combine over the years, from the problematic (“Do you think your mother’s attractive?”) to the creepy (“If we come to town, will [your girlfriend] be there for dinner?” “How would you kill somebody? Would you use a gun or a knife?”) to the downright illegal (“Are you gay? Is your mother a prostitute?”).

Well, the CFL had its own national combine this week, and it came with its own weird questions. While nothing was mentioned that was as troubling as the various NFL questions we’ve seen pop up, a team did ask something pretty weird, as CFL.ca’s Chris O’Leary related:

You can’t be prepped for every question, though. With word circulating through the combine that one team had opened a box of donuts and asked the player which one he’d be, the players will have to be able to show they can think on their toes.

How are you even supposed to answer that? “I’m a jelly donut, full of delicious surprises”? “I’m a honey cruller, because I’m sweet”? “My run-blocking ability is the sprinkles on top”? “I’m a donut hole, an efficient small package”? Well, prospect Dan Petermann, a wide receiver for the McMaster Marauders who impressed at the combine overall, posting the best 40 time (4.539 seconds) and tying for the top vertical jump (39 inches), also showed some quick thinking when O’Leary asked him how he’d respond to the donut question.

He stammered a little when the donut question was put to him by media, but he went with his gut on the answer.

“My favourite one is Boston Cream,” he said. “That’s the only one I get from Tim’s.”

Ah, maybe that’s it. Maybe the CFL teams are trying to smoke out which prospects prefer famously Canadian chain Tim Hortons and which are loyal to American chains like Krispy Kreme or Dunkin’ Donuts. Maybe that’s supposed to indicate something about if they’ll stick in the CFL for the long term or test the NFL waters. Or maybe this is just another silly combine question. At least they’re not asking prospects how they’d murder someone with a donut, though.