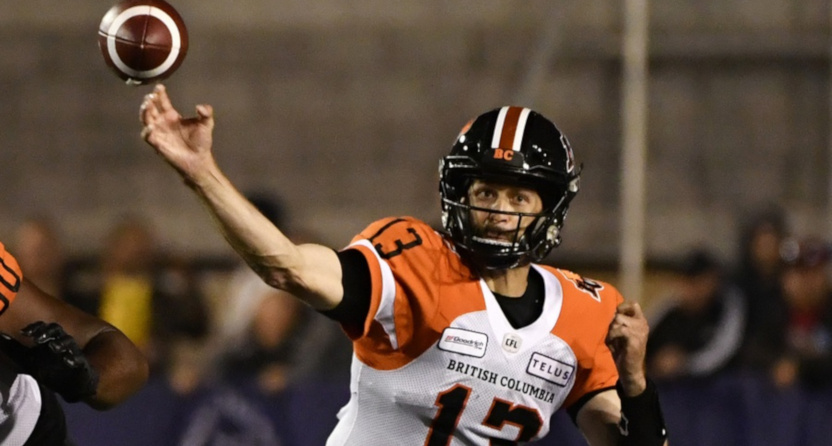 The COVID-19 coronavirus pandemic has had plenty of impacts on North American sports, but most leagues wound up moving their seasons rather than canceling them entirely. The Canadian Football League went the opposite way, though, exploring options for a rescheduled season based around a hub or hubs early on but eventually giving up and calling off the 2020 season in August. And that’s now led to an unusual contract issue with B.C. Lions’ quarterback Mike Reilly, who has reportedly filed a grievance over a $250,000 guarantee he hasn’t received that supposedly wasn’t tied to anything, and thus, should have kicked in regardless of whether there was a 2020 season.

This was part of the four-year, $2.9 million deal Reilly (seen above in a 2019 game against the Montreal Alouettes) signed with B.C. as a free agent in February 2019, following six seasons with the Edmonton Eskimos (a time that included a Grey Cup and a Grey Cup MVP in 2015 and a CFL Most Outstanding Player award in 2017). But this portion of the deal was supposedly made by Lions’ GM Ed Hervey (who suddenly left the team in mid-October, citing personal reasons) without the knowledge of team president Rick LeLacheur or owner David Braley (who passed away in late October). Here’s more on that from TSN’s Farhan Lalji:

According to league sources #BCLions president Rick Lelacheur was also unaware of the guaranteed portion of Reilly’s agreement. It is believed this situation led to Ed Hervey’s departure from the club. @TSN_Sports @TSN1040 @CFLonTSN @CFL https://t.co/tz9kZeOpWs

While including a fair bit of “fully guaranteed” money has often been seen in the NFL, it’s a little more unusual to see that in the CFL. And in the cases where it has been included, it’s often been an extra incentive for only the best star quarterbacks. (And even then, it hasn’t always worked out; Doug Flutie, for example, was promised far more than he actually got as part of a personal-services contract with then-Calgary Stampeders owner Larry Ryckman in 1994, which wound up not paid thanks to Ryckman’s bankruptcy.) And there hasn’t been a lot of talk about fully-guaranteed money in most recent CFL contracts, so that would make Reilly’s an anomaly, and it’s understandable why that (if negotiated without the approval of the team owner or president) might have led to Hervey’s departure (as per Lalji’s report).

And it’s definitely understandable why Reilly would file a grievance over this. While most CFL players haven’t gotten much at all this year thanks to the cancelation of the season, Reilly’s contract appears to say that he should have been paid this $250,000 regardless of the status of the season. And that’s why this particular form of guarantee is such a big deal versus, say, a roster bonus (which would necessitate there being a roster and a season). And it certainly makes some sense for him to try and get this money, and the talks of a settlement might mean that he gets some of it (but likely not all) without a huge amount of fuss. And some current and former CFL players (including Nik Lewis on The Rod Pedersen Show Tuesday) have spoken out in favor of Reilly getting as much as he can here.

Yes, even a settlement here would put Reilly in a better situation than a lot of current CFLers who have had to turn to other sources of income with no CFL season. But that’s not Reilly’s fault. The team (or, at least, the GM) agreed to this deal as part of bringing Reilly (long one of the CFL’s best quarterbacks) over from Edmonton as a free agent in February 2019. And there’s at least an argument that they should have to live up to that even when they’re not fulfilling their other player contracts, as those contracts were more specifically dependent on a season.

The thing that’s really fascinating about this, though, is how much of a difference the unprecedented circumstances of 2020 have made. In any year other than one with a pandemic-canceled season, there would have been no practical difference between a camp roster bonus and a fully-guaranteed bonus. (Yes, there are always teams that will cut players to avoid a camp roster bonus, and that’s why agents push for guarantees like this, but Reilly is still one of the CFL’s elite quarterbacks; if there had been a season, he very likely wasn’t getting cut in camp.) But in 2020, there was a world of difference between those two contract scenarios, and that appears to have led to a GM leaving. It’s somewhat the reverse of Wimbledon’s pandemic insurance;, which worked out very well in this year’s unforeseen circumstances. This contract did the opposite of that (at least for the Lions; not for Reilly).